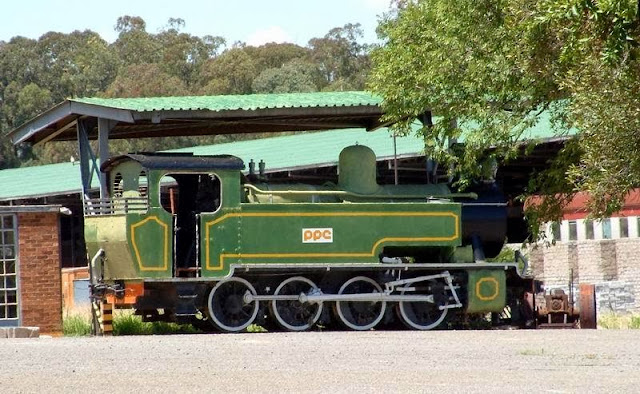 This locomotive has the markings of PPC (Pretoria Portland Cement Co Ltd.) The locomotive was donated to the museum by PPC. PPC used this locomotive as No 2 at their "PPC No 2 Works" cement factory at Slurry, 20 km east of Mafikeng. This 0-8-0T tank locomotive was built for PPC in 1938 by Hunslet Engine Co Ltd of Leeds in England according to a base design that was exported since 1930 to railways in the Gold Coast and Nigeria in West Africa. The locomotive has works number 1900, and boiler number 60512. It has a cylinder diameter of 18 in. x 23 in. stroke. [source: Industrial Locomotives of South Africa 1991 - Middleton and Williams]

In the late 1980's this locomotive was plinthed on the platform at SLURRY station. Image kindly provided by Phil Braithwaite 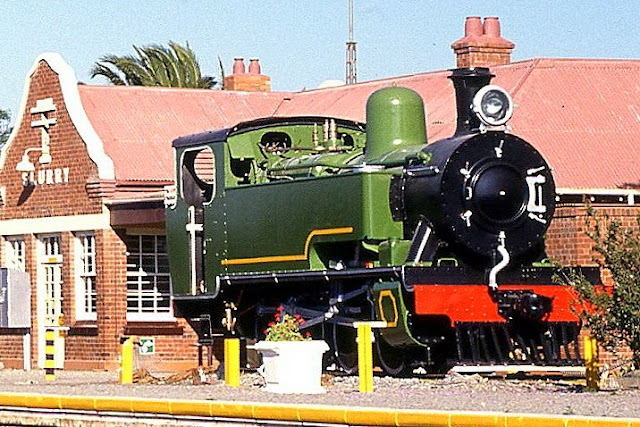 In 2005 she was moved to the premises of the North West Transport Museum in Klerksdorp. 2005 Newspaper picture

The Hunslet Engine Company, from the Leeds area in the UK, started building locomotives as long back as 1864. In 1964, when looking back over a century's activity's, the publication "A Hunslet Hundred", by LTC Rolt, stated:

"The year 1930 saw the appearance of the first of an outstandingly successful design. This was an 0-8-0 side tank with 18 in. x 23 in. outside cylinders and 3 ft. 6 in. coupled wheels which was built for the 3 ft. 6 in. Gold Coast Railway (located in present day Ghana). " 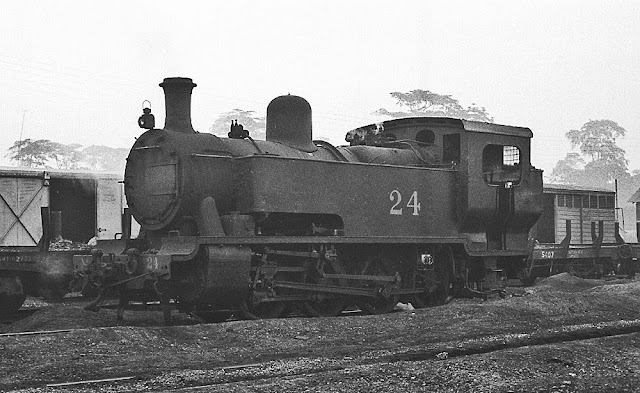 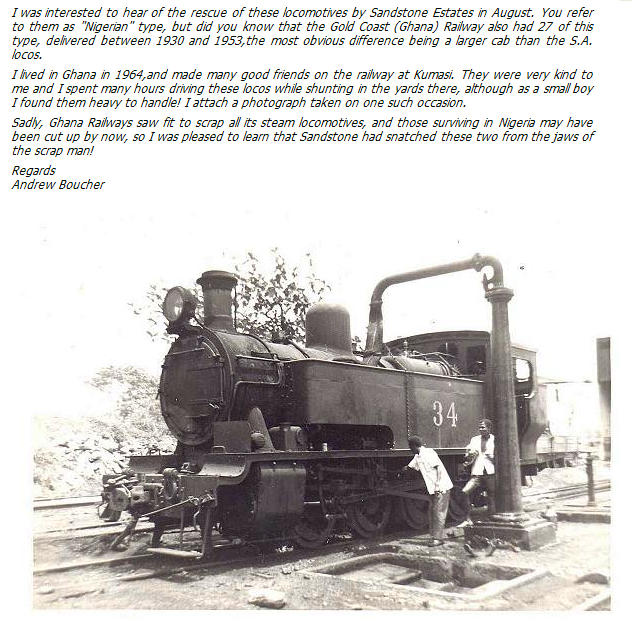 "With a weight in working order of 48 tons 8 cwt., this was a powerful little locomotive giving a tractive effort figure of 23,532 lb. at 75% boiler pressure. Successive repeat orders over the years have brought the total of these engines built up to fifty-seven, twenty-four for the Gold Coast and thirty-three for the Nigerian Railways."

"The last batch of 6 engines built for Nigeria in 1955 differed from their predecessors in having eight-wheeled tenders in addition to the 1000 gallon side tanks, thus bringing the total water capacity to 4,800 gallons."

Based on the same base design as the steam locomotives delivered to the Gold Coast and Nigeria, four slightly different looking 0-8-0 side tank engines were delivered in South Africa. The South African version had smaller cabs and smaller smoke box doors. In 1938 PPC (Pretoria Portland Cement Co Ltd.) PPC received 2 new  Hunslet locomotives - "No. 1" = HE 1892 and "No. 2" = HE 1900. PPC "No 1" was scrapped many years ago, but PPC No 2 was plinthed on the Slurry station platform near the "Works No 2" cement factory at Slurry, 20 km east of Mafikeng. Also in 1938 the Rand Water Board start using one of these locomotives on their 5km branch line to the Swartkoppies pumping station. The pumping station was coal-fired at the time. In 1946 a 2nd Hunslet 0-8-0T was delivered new to RWB. A couple of images of the RWB branch in operation in 1980 may be seen here. 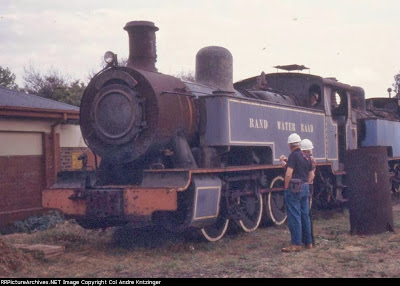 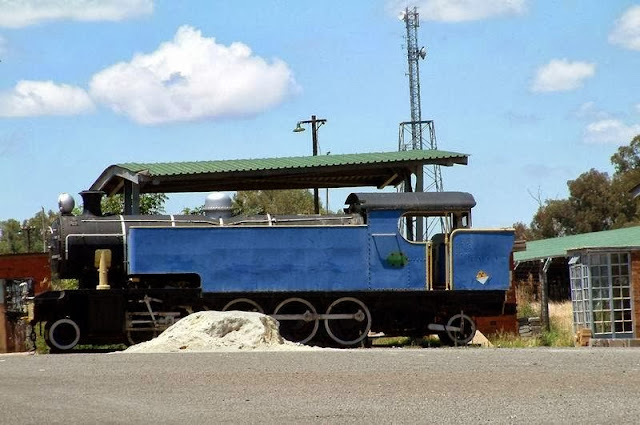 This locomotive was donated by Anglogold Ashanti to the North West Transport Museum in Klerksdorp. One of the gold mines resorting under Anglogold is Vaal Reefs - see below.

North British Locomotive Co. Ltd of Glasgow, Scotland, has built over 50 of these standard 4-8-2T and 4-8-4T tank locomotives for customers all over the world. In South Africa several gold mines used these locomotives. This particular example was used by the Vaal Reefs Gold Mine at Orkney near Klerksdorp. It was plinthed for some time at no. 2 shaft at Vaal reefs. This engine has works number 27587 built in 1955 for Vaal Reefs. The boiler no is 60512. Vaal Reefs donated the engine to the museum. The engineer who arranged the donation was a Mr Robinson, son of mr Robbie Robinson, who was for years the engineer in charge of the steam locos at Lorrain Gold Mines near Allanridge in the Freestate. [source: Industrial Locomotives of South Africa 1991 - Middleton and Williams]

A sister of this NBL locomotive may be seen at the Florida Junction shopping centre in Roodepoort.