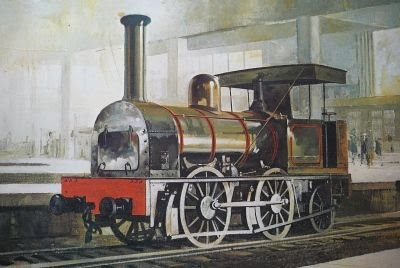 This copy of a painting by T Butler was made at an unknown date and was probably used on a calendar which focused on South African National Monuments.

Disturbingly it appears that the worksplate on the left hand side has found its way to an auction room back in the UK.

The original firm was founded in 1817 by Robert Hawthorne. Robert Hawthorne first began business at Forth Bank Works in 1817, building marine and stationary steam engines. Robert's brother joined the firm in 1820; it was then renamed R&W. Hawthorn & Co. Possibly after having attended the Rainhill Trials in 1829, they became interested in locomotives, and sold their first engine, a 2-2-2 named "Modling," to a railway in Vienna. They subsequently became an established locomotive building firm at Newcastle-upon-Tyne. 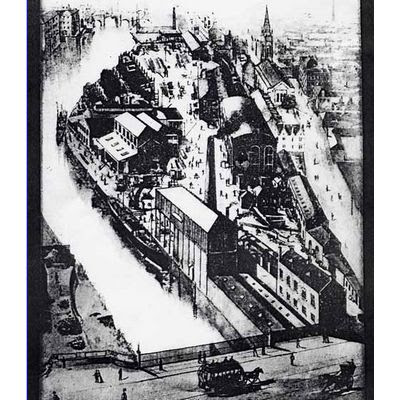 This view looks to the north-east down the Water of Leith towards Leith Harbour and the Firth of Forth. Junction Bridge is in the foreground, and Hawthorns & Co Leith Engine Works that made railway engines and small ships is in the centre of the picture.

It was this last company which had built the "Blackie" engine No. 162 now displayed in the Cape Town station concourse. 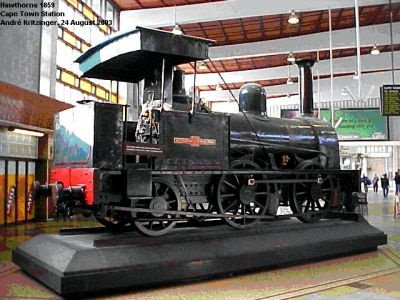 The locomotive is a 0-4-2 wheel type. It illustrates the development of the railway locomotive where the cylinders were placed under the smokebox, the pistons being horizontally connected to a cranked driving axle. Stephenson's "link motion", by which the valves allowing steam into and out of the cylinders were operated, worked by rods connected to eccentrics on the cranked driving axle, and fitted in neatly with this arrangement. A problem of this design was lack of room between the axles, and with the "Wellington" (see below) built shortly after, the cylinders were moved to the outside of the engine. 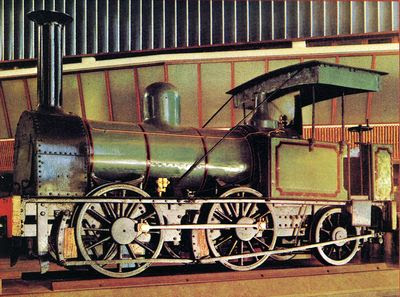 It was a windy spring morning when, on September 8, 1859 (the exact date varies amongst sources), the parts for South Africa's first locomotive were brought ashore in lighters from the brig Charles docked in Table Bay. The small steam engine, built by Hawthorns & Co Leith Engine Works at their Leith works in Scotland, had been imported by Edward Pickering, the British contractor selected to build a railway from Cape Town to Wellington, a country town 72 km (45 miles) distant.

The construction was beset by numerous problems, not the least of which was the construction engineer himself. Though there was ample local labour, it was untrained and otherwise unsuitable; navvies - the 'navigators' who had built Britain's canals and railways - had to be brought over from England. But the greatest problem was Pickering's basic incompetence, which led to the builders taking nearly two years to lay the first mile and a half (3 km) of track. The Cape Town Railway and Dock Company, who owned the line and were, understandably, unhappy about such snail-like progress, endevoured to sack Pickering as the contractor. In October 1861, matters came to a head. The resulting "Railway Disturbances" were vividly described in the Cape Argus:

"A general fight was then commenced. The men flew at each other like infuriated tigers. Mr Pickerings's men tore up the rails and sleepers, tore down the culvert at Salt River and commenced making a barricade, the fighting going on all the time.

The men rushed at the culvert and finished breaking it down and ran the company's large engine (the "Wellington") which was standing near, off the rails over the ditch through which the culvert was constructed. The fight kept up for hours. The company's men were supplied with buckets of beer from a neighbouring canteen, but the contractor's men would not let them drink it, but took it away by main force, took possession of the canteen and were treated with beer also. The drunkenness was fearful, the men laid out in a beastly state of intoxication. There were numerous fights. The engine (the "Wellington") of the company is laying head foremost over the rails into the culvert, and Mr Pickerings's engine ("Blackie") across the road." 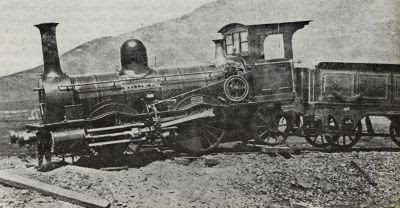 The Company's locomotive "Wellington" was derailed in the "Railways Disturbances" of October 1861.

The disturbances led to a Supreme Court action and, eventually, the Railway and Dock Company itself completed the work, under the direction of its resident engineer, William Brounger. The derailed and damaged locomotive "Wellington" was soon repaired at the Company's newly-established workshops at Salt River, just outside Cape Town - a site which was to remain a locomotive works and engine shed for the next 122 years, until the official demise of steam power in Cape Town on 10 January 1982. 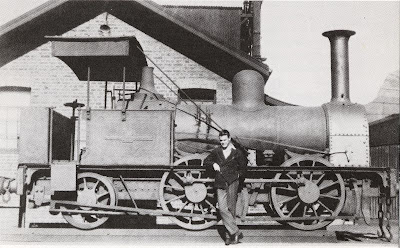 Photo: South African Railways. The doyen of South Africa's locomotive enthusiasts, D.F. Holland, poses in 1929 at Salt River works next to the country's first locomotive - the Pickering contractors' engine, built in 1859 by Hawthorns & Co Leith Engine Works. The engine was declared a national monument in 1936, and was later preserved in the Cape Town station concourse. 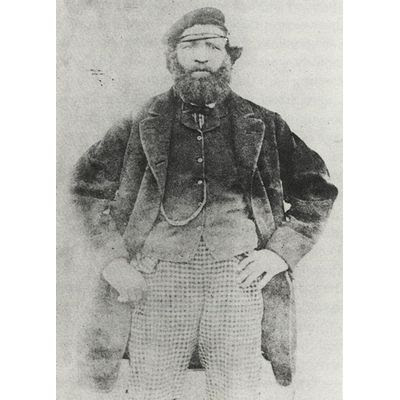 William Dabbs, who arrived with the engine, put it in operation himself, and apparently drove it as long as it was in use by the Cape Town Railway and Dock Company. 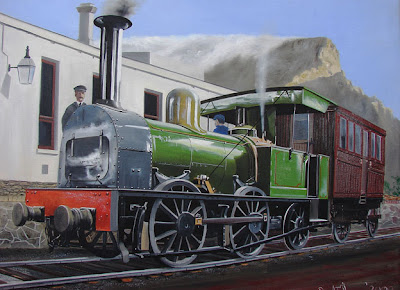 This 2009 painting, made by Paul Treleven, is shown here by kind permission of the artist. The painting pictures BLACKIE at CAPE TOWN station around - say 1863 - with Table Mountain under its traditional cloth as usual. For more of Paul's work you may visit his fine arts page at http://www.paultreleven.com/

The standard (British) gauge of 1,434 metres (4 feet 8.5in) was used, but when the Cape Government took over the Railways in 1873, it decided to adopt a gauge of 1,066 for all lines and to alter existing lines accordingly. To avoid immediate loss of all rolling stock, an intermediate rail was placed between the existing ones. When the conversion to the narrower gauge was completed in 1881, the period of service of the engine, and of its driver, came to an end on this line. 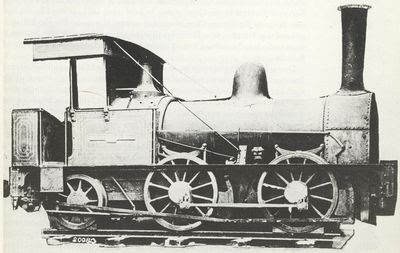 However, in 1873, this locomotive was transferred to Port Alfred to be used at the Kowie Harbour Works. The Harbour Works is not to be confused with the Kowie line (Grahamstown to Port Alfred) - Building of this latter 3ft 6in gauge line only started 8 years later, and the two Hunslet locomotives for this line was only landed in May 1882. 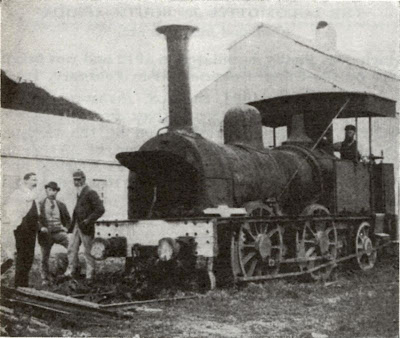 This old archives photo, published in the Nov 1943 issue of "The South African Railways and Harbours Magazine" shows the engine #9 (Blackie) after moved in 1873 to the Kowie Harbour Works. Note the builders plate placed loosely near the front wheel - maybe it already got "lost" at this time? The bearded driver on the footplate possibly is William Dabs, who worked the engine on the Cape Town-Wellington line.

"BLACKIE"
This engine, one of six ordered for the railway, was built by Hawthorns & Co. Leith Engine Works in Scotland. It became practice to give names to different locomotives, and several of those names have come down to us, e.g. "Fire Horse", "Wellington", and "Sir George Grey". Strangely enough there is no trace of any name that this first locomotive may have born, though later in its life it was known as "Blackie".

"WELLINGTON"
One of the group of six engines was named the "Wellington". This locomotive had its picture taken in the "Railway Disturbances" of 1861. It differed from "Blackie" in that it had the cylinders on the outside of the engine - "Blackie" still was an earlier design with the cylinders placed under the smokebox. 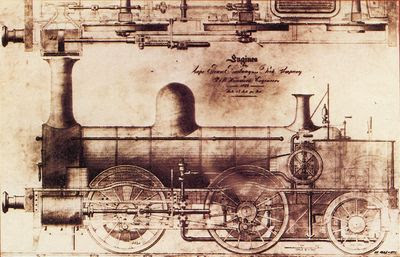 This is a drawing of the work plans used to build the Wellington. 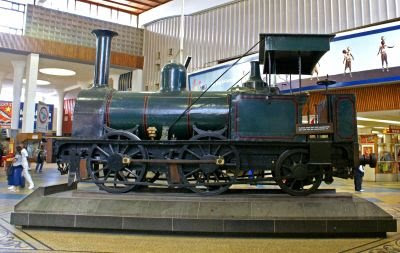 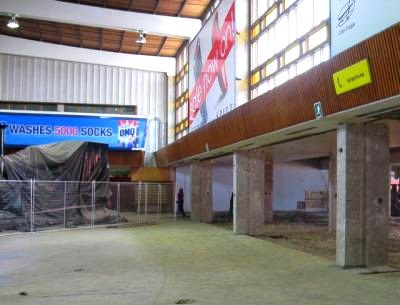 Early in 2009 work started on the redevelopment of the Cape Town station to make it more user friendly. Here on the left Blackie is seen hidden under a black canvas to protect it from the dust of the the construction work. 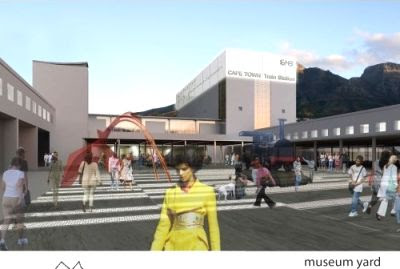 These are architects views of what the station museum area would look like when completed.

It is disturbing to learn Blackie might be put on display outside in wind and weather. This does not seem to be a proper way to treat a 150 year old unique historical item unless very special care is taken to protect, preserve and maintain it as was done for many years in the concourse where it was well protected from becoming a pile of rust.. 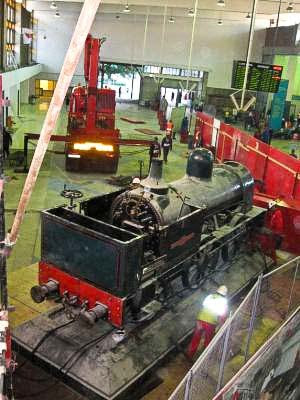 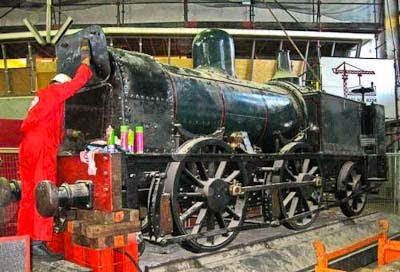 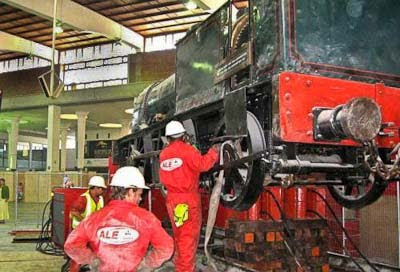 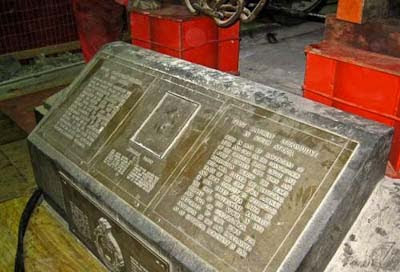 Blackie has stood on the Main Concourse since 1959, and fifty years later, Mr Piet Lotz, who assisted with Blackie’s first move, will be there to see its relocation to temporary storage. 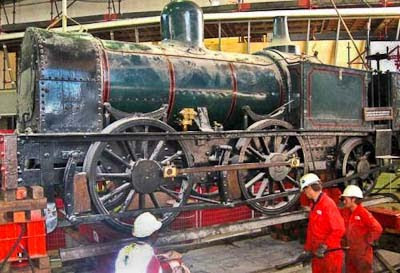 After an extensive planning process, Intersite Property Management Services, a subsidiary of the Passenger Rail Agency of South Africa (PRASA), commenced with construction at the Cape Town station in September 2008. As part of the revitalisation, Blackie is being moved in order to create an uncluttered concourse. However, the station’s history is just as critical an element to this project. So, a Transport Museum is part of the plan, and Blackie, and the signal post that stood close to her, will find a new home in what is currently the long distance bus terminal where the Transport Museum will be located (within the Creative precinct of the station). The Transport Museum will play a role in enhancing the cultural richness of the city. 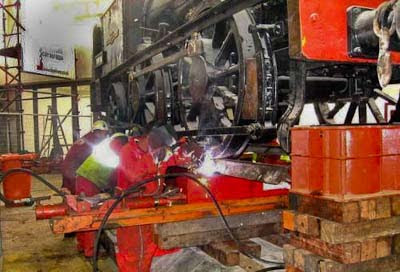 Moving Blackie out of the concourse is no easy feat and this will be done in two phases. Firstly, Blackie will be moved from the concourse to Old Marine Drive. However, the challenge is that the floors on that side of the concourse are hollow underneath, as this was previously part of the sea bed, reclaimed for the station, in the 1940’s. 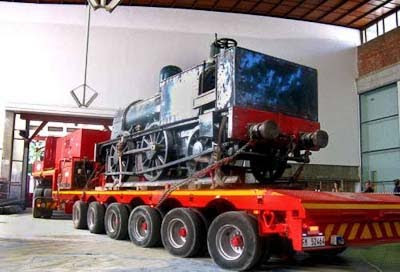 Because of Blackie’s size, she will be moved after peak hour traffic to a warehouse, her temporary home. 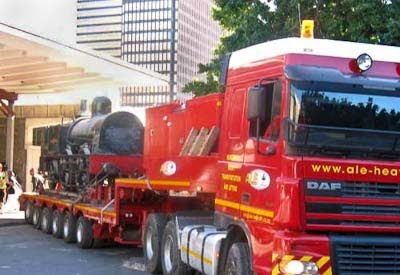 The signal post that was salvaged from the railway line to Sea Point, and which stood close to Blackie, in front of the Shosholoza Meyl area, will also join Blackie in the move. At the end of March 2010, when the Transport Museum is complete, Blackie will be moved to her permanent home in the Creative precinct of the revitalised Cape Town station.

Posted by Piet Conradie (for e-mail addr: see profile plse) at 9:48 AM