Actually this locomotive SAR N0 2586 is stored here for SANRASM, but has not been moved due to the excessive cost, it is pretty well stripped by now.. This locomotive was built in 1954 as works number 28719 by Henschel & Sohn.

These Photos were taken in April/May 2009. 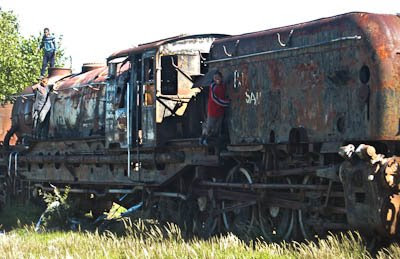 After displacement by diesels, the whole GO lass was moved to De Aar in 1977, where the locomotives spent seven years on the dump, before being written-off abruptly early in 1984. Only No 2575 and the above engine No 2586 have survived.

In 1938 development in locomotive design and power had led to the introduction of the SAR Class GM, which were noted for their exceptional hauling ability on 60-lb rail. They were also the first Garratt on the SAR to employ the use of an auxiliary water tank, therefore getting maximum power from the axle load, without the limitations of the water supplies carried in the front tank. 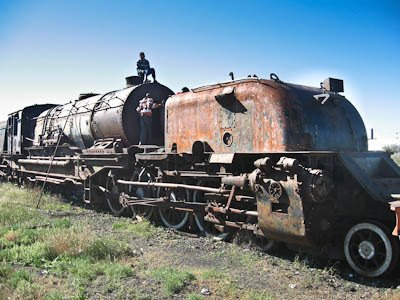 It is from "Grand Daddy" Class GM which the Classes GMA, GMAM and also Class GO developed.

Our interest here is focused on Class GO. The GO class was introduced in 1954 and 25 of these fine locomotives were built by Henschel & Sohn. 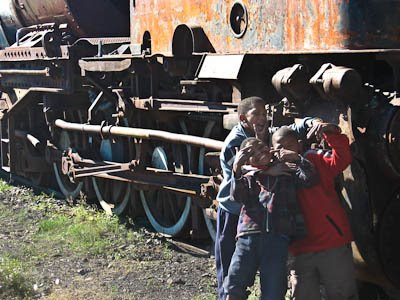 A variant of the Class GMA, the Class GO was suitable for use on branches laid with 45-lb rail, the Class GO differed in having a smaller boiler. The cylinder castings were lined to reduce their diameter to suit the GO's steaming capacity compared to the GMA. Tractive effort was also correspondingly reduced and coal and water capacities lessened to reduce the overall weight. Many other parts are interchangeable with the GMA. 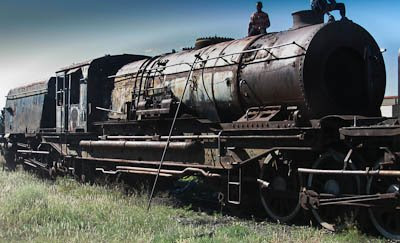 25 were ordered from Henschel in 1954, and after a brief period on the Krugersdorp-Zeerust line, were placed in service on the Pietermaritzburg-Greytown branch, from whence they were sent to the Belfast-Steelpoort line, although in 1972 they had a short and unsuccessful spell on the Umtata branch. Their final allocation was to the Natal north coast lines before being withdrawn from service by 1975. 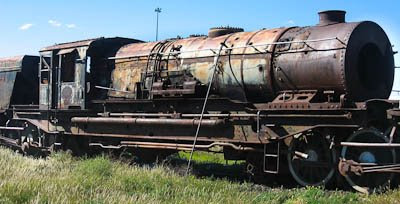 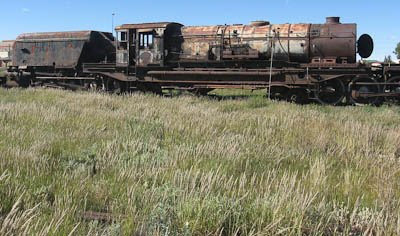 The occurrence of one of these locomotives at De Aar is a bit of a surprise, but this locomotive may at some stage has seen operation on the lighter track branch line towards Upington, but certainly not as far Namibia - the only Garratts on record to do so was Class GCA 2-6-2+2-6-2 locomotive No 2615 & others working from Windhoek between 1928-32. [source: The First 100 Years of State Railways in Namibia - Bravenboer & Rusch - 1997]

In his book TWILIGHT of SOUTH AFRICAN STEAM, published in 1989, AE Durrant wrote about the GO Class:

"These locomotives were in all technical features identical to the GMA/M classes, but had smaller boilers and cylinders, bringing the axle load down to 134 tons, suitable for use over lighter track, on which they were never utilised. The real purpose behind this design was unclear, as they were never used over lines which could not take heavier power. Possibly their originally envisaged use had disappeared between the time of ordering and time of delivery."

"At the opening period (1973) of this book, all GOs were stationed along the North coast of Natal, at Stanger, Empangeni, and Gingindlovu. Here they worked the main line, then in course of electrification, often double-headed with a GMA/M or another GO, this being the only part of the SAR where double GOs were regularly operated. They also worked the line north to Gollel on the Swaziland border, and were the most powerful locomotives used on this line, for which their design features were finally justified shortly before withdrawal. Both the Eshowe and Nkwalini branches saw GOs used to replace the older GE and GEA Garratts, but on the Eshowe line their fire-throwing capabilities when climbing 1 in 30 gradients through sugar cane fields caused the GEAs to be returned until dieselisation of this and the other lines using GOs."

"After displacement by diesels, the whole class was moved to De Aar, where the locomotives spent seven years on the dump, before being written-off abruptly early in 1984. Thus these modern and very effective locomotives spent only 22 years in service, being replaced by expensive diesels, which were so feeble as to need using in multiple where a single GO sufficed, and whose consumption of imported fuel and imported spare parts became increasingly costly." 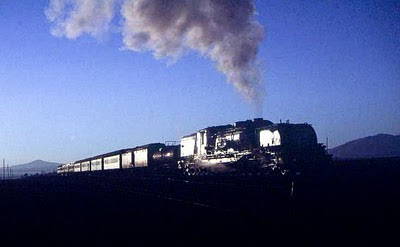 7 July 1999: this photo is courtesy Roger Griffiths, and shows Class GO no 2575 working a steam special. At this time she was based at Dal Josafat, but has since been moved to Voorbaai. 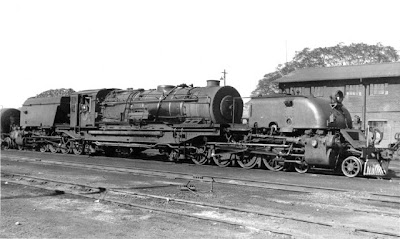 Source:
Photos on this page (unless indicated otherwise) were very kindly taken by ds. F. Marais in April/May 2009.
Posted by Piet Conradie (for e-mail addr: see profile plse) at 4:44 PM