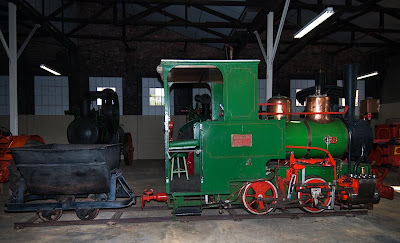 This little 0-4-0WT (Well Tank) locomotive is designed for 600mm gauge. It transported harvested grapes from the vineyards on the farm Leipzig to the farm's cellar. 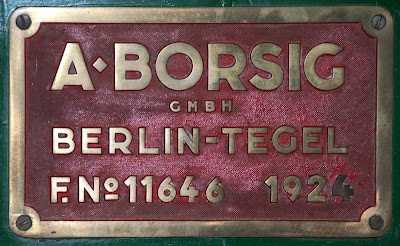 (Johann Friedrich) August Borsig was the founder of one of Germany`s principal engineering companies. He was born, the son of a carpenter in Breslau (Wroclaw) in Silesia, and studied building for a time before embarking on a commercial education in Berlin, which led him towards engineering. By 1872 Borsig was the largest producer of locomotives in Europe, with works at Zabrze in Silesia and at Dortmund, as well as those in Berlin. It entered a period of relative decline after the death of August Borsig's son Albert in 1878, and went through many mergers in the 20th century. It continued nevertheless to produce notable locomotives, including the three class 05 streamlined 4-6-4s of 1935-37, which set various speed records. One of them is preserved at Nuremberg. The last of 16,352 steam locomotives produced by Borsig was completed in 1954. 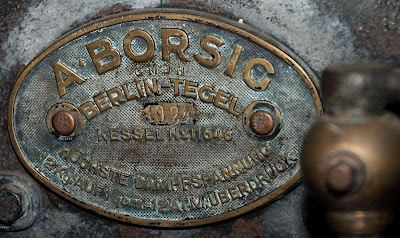 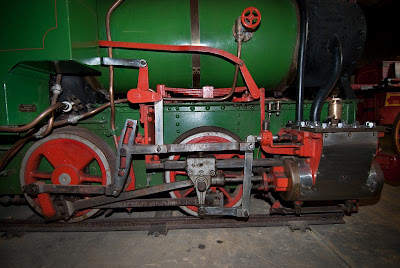 The Well Tank design has the water reservoir in a tank between the wheels - this lowers the center of gravity of the locomotive, and therefor reduces the risk of running off the rails. 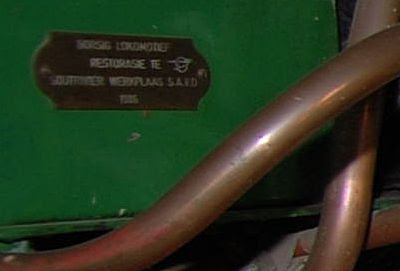 This plate on the right hand side is in Afrikaans; it states that the Borsig locomotive was restored in 1986 at the South African Transport Services Workshop at Salt River. Another plate on the left hand side has the same inscription in English. 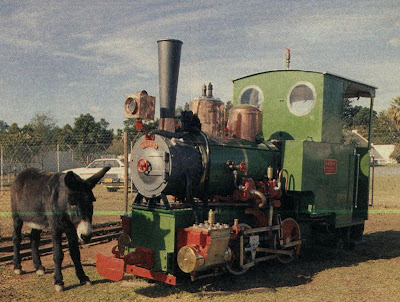 This picture of "BESSIE" appeared in the September 19, 1986 issue of the Afrikaans language farming magazine titled "Landbouweekblad".

The caption had the donkey awed by a workhorse of a different colour! 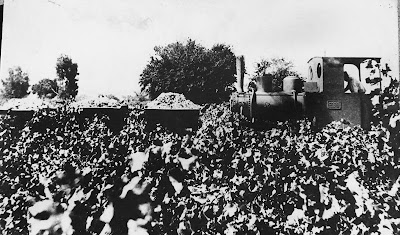 Picture: Worcester Museum - Formerly this A.Borsig locomotive was used in the vineyards on the farm named "Leipzig" in the Nuy area east of Worcester. 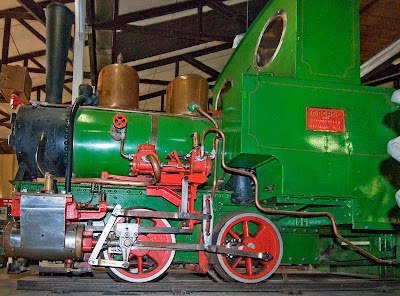 The restored locomotive was presented to the Kleinplasie Farming Museum (now "Worcester Museum") by Mr. John Rabie, whose grandfather Mr. Johnny Rabie in 1924 had bought the steam locomotive in Germany and imported it to South Africa. 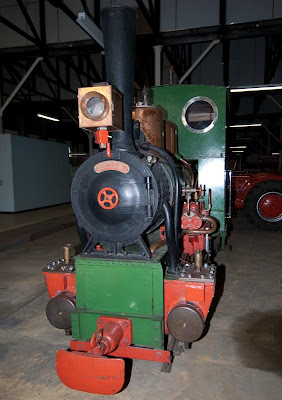 The locomotive was in packing cases and his son John Rabie and a friend from Robertson by the name of Wolhuter, assembled it on his farm Leipzig. 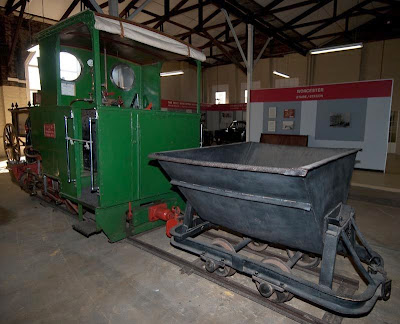 The locomotive was then used to haul 4 tipcarts or tramcars (called "cocopans" locally in South Africa). These carts were loaded with the grapes harvested in the vineyards, and the locomotive then transported the grapes to the wine making cellar on the farm. 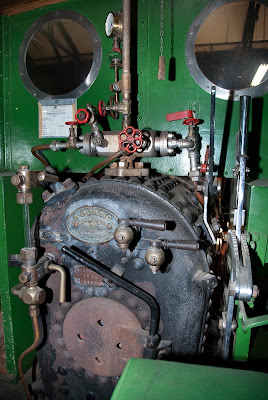 The last (1986) boiler certificate on paper is displayed beneath the left window.

The farm train was in operation until before WW II. 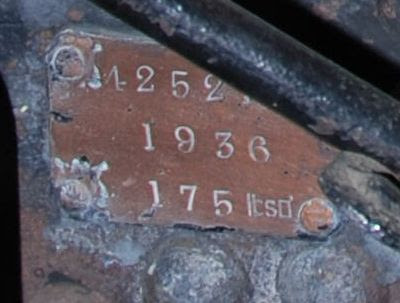 Importantly, the vineyard train overcame the problem of dust caused by horse and mule wagons.

In the 1960's a farmer from Loxton - Jan Hugo, bought the engine from John for R400 . In 1984 John Rabie, however, bought it back with the intention to give it to the KLEINPLASIE museum to be restored for display at the agricultural museum.

However, before the restoration could start, disaster struck the little engine. The Breede River valley suffered a severe flood - the locomotive was also involved and got buried under tons of sand, mud and silt. In 1985 the Borsig had to be dug out by means of a bulldozer and front-end loaders. The first impression of the Borsig was one of disgust. She had been buried for a long time under sand, muck and sludge after the Breede River had had a go at her …..

What was left of the little loco, was taken to the South African Transport Services workshop in Salt River. Mr. Albie Bester (Bessie) was, at the time, Artisan Special Duties at the workshop, when his Supt. tasked him with restoring the engine with these words: "Yes, Bessie, I want you to repair this engine, and just remember, there are no spares available and we have no machines left for this type of work".

In later years, Albie Bester remembered: "The repairs were done 'under the radar' and buying was out of the question. The little pistons needed piston rings badly, but not since 1952 have I seen a copper piston ring in this part of the world, and that was for 24 inch pistons. The boilermakers had a tough nut to crack. The boiler had to be re-tubed and tubes were not available, never mind replaced! The cab was ruined beyond recognition and was passed to the copper smith. I ground in slide valves for days. Only 2 of them, but if you take the damage in consideration it could just as well have been 4 or 6."

"By September 1986 Borsig would have been proud of his model. I was ready for a trial trip and seeing we had no line to try it on, the blocks on the floor had to do. The Government Boiler Inspector came around and after a water and steam test, signed on the dotted line for 120 lbs on the red mark. The grand launching was determined, wood was carted from the carpenter shop and the fire lit. Backwards and forwards we went over this uneven surface, but the fact that the wheels only ran on the flanges we could still try her out. There were enough people to look for faults so I just kept my ears open. "

"After that the painters took over with their Supt. in charge. Only the past masters in the painting trade were good enough. Where paint would not give shine, we took her for two quick collections from sponsors for Brasso. That same afternoon a lorry came to fetch Bessie till a Friday when we went to Worcester to try her out on the cocopan rails."

"On the Friday in question there was a final shining with cheese cloth just before we were expecting Mrs. Heloise Naude, curator of KLEINPLASIE. A cast brass Plate, with "BESSIE" on, was mounted on the smokebox front, below the lamp bracket. Mrs. Naude arrived, and the Supt. announced that I would do the handing over-------with about 10 engineers hanging around to shake the grand old lady's hand." 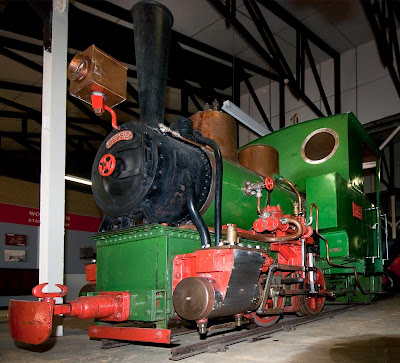 In 1986 the locomotive was lovingly restored to operational condition by Mr. Albie Bester (nickname "Bessie") before handed to the museum. 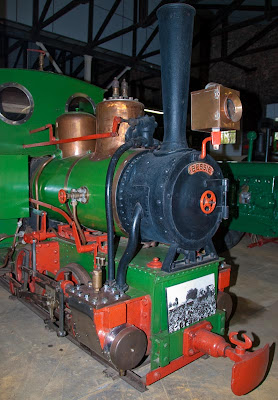 The name "BESSIE" was given in honour of the restorer - the name does not come from the period when the locomotive puffed through the vineyards on the Leipzig farm. 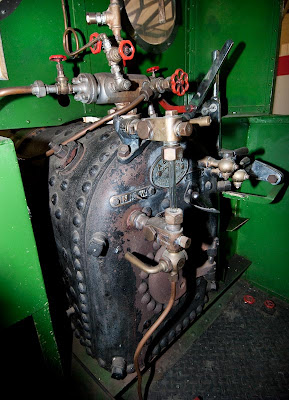 After October 4, 1986, the locomotive was used on steam specials at the museum for some 2 years until her boiler certificate expired. Afterwards she was then displayed inside the entrance of the Museum, and was later moved to her current position inside the old steam locomotive shed.

Sources:
On to next entry: SAR Class 15F engine No. 2994 locomotive
Posted by Piet Conradie (for e-mail addr: see profile plse) at 5:18 PM