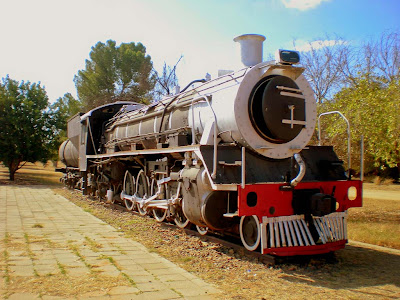 This locomotive, SAR Class 19D engine no 2656, was built by Krupp (Friedrich Krupp Maschinenfabriken, Essen, Germany) as their works no 1836 in 1939.

The 19D plinthed in Jan Kempdorp has a so-called "Vanderbilt" tender which has a cylindrical water tank and six-wheeled "Buckeye" bogies. In 1901, Cornelius Vanderbilt III, whose great-grandfather founded the New York Central Railroad, invented a cylindrical tender which was soon adopted by a number of American railroads with oil-burning locomotives. Compared to rectangular tenders, cylindrical Vanderbilt tenders were stronger, lighter, and held more fuel in relation to surface area. In South Africa the design was used to carry water & coal for the locomotive. 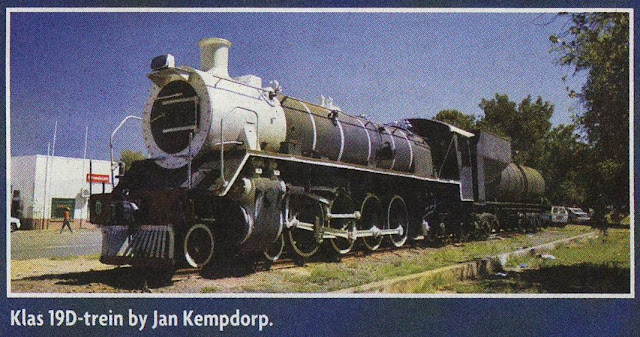 The picture above featured in a Northern Cape tourist brochure published in Aug. 2013

The final order of 50 engines of this class was from North British Locomotive Co in 1949 and fitted with a new type of tender known as the Vanderbilt as mentioned above. Obviously the tender of the locomotive in Jan Kempdorp was added at a later stage when tenders were switched for some reason.

These versatile locomotives saw extensive service on every system of the SAR and were amongst the last steam locomotives to be withdrawn from active service.
Posted by Piet Conradie (for e-mail addr: see profile plse) at 3:31 PM