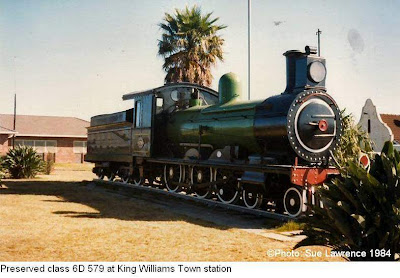 This 1984 photo taken by Sue Lawrence shows the proud locomotive in her original plinthed state and in fine condition. This photo was first posted on www.sa-transport.co.za.

Originally designed by the locomotive superintendent Michael Stephens for the fast passenger service on the CGR (Gape Government Railways), successive orders for the 6th class were placed with both British and American builders between 1893 and 1904 for use on the CGR and OVGS. 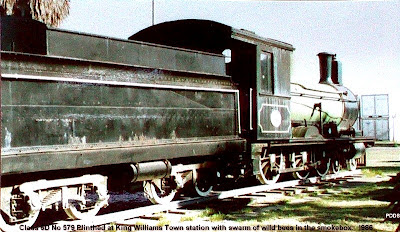 Originally the Class 6D were delivered with 3 axle tenders, not the 8-wheel type tender on the plinth in King William's Town. When this photo was taken in 1986 a swarm of bees had taken control of the smoke-box. Photo kind courtesy Peter Sinclair.

Locomotives for the 6th Class were ordered in many batches, and in 1898 33 engines were delivered by Neilson, Reid and Co - these were similar to their predecessors, but were fitted with 6-wheeled tenders and became the SAR class 6D. 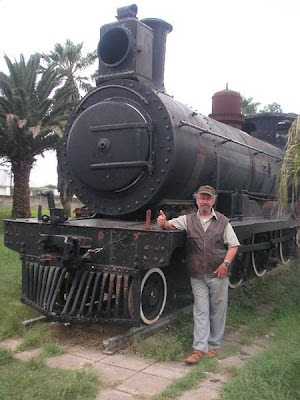 This photo of Franz posing with No 579 shows the current sad state of the only plinthed SAR Class 6D locomotive. The picture was taken on 17 February 2011. 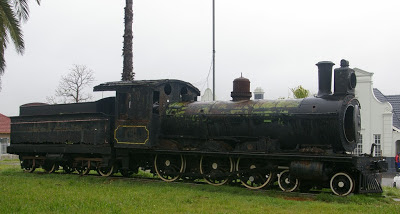 23 October 2012 - This picture courtesy of James Taylor shows the extremely poor state of this locomotive - it is due to fall apart sometime soon - The tender is rusted through nearly all round. This again proves that weather-wise some locations were never suited for plinthing a locomotive out in the open. Compare with the beautiful 1984 image up above!

In Steam Locomotives of the South African Railways author DF Holland states the following: The Class 6 series of locomotives were introduced primarily as passenger locomotives, but when the class became displaced by larger and more powerful locomotive classes, it literally became a “Jack-of-all-trades” that proved itself as one of the most useful and successful locomotive classes ever to be designed at the Salt River shops. It went on to see service in all parts of the country except Natal and was used on all types of traffic. In Cape Town they held a monopoly over the suburban services until electrification arrived in 1928, and on the Reef they also worked these services between Randfontein and Springs until the loads became too heavy for them. They were employed on branch lines all over the country, Natal excluded, and practically every big station and many smaller ones had its quota of these handy locomotives to work the local passenger, goods and shunting services. Like the Class 7, the Class 6 family gave good service for many years. By the time the last ones were retired in 1973, the Class 6 series had achieved a service life of eighty years, a performance that can be matched by few, if any, other locomotive classes world wide.
A sister Class 6D in working order 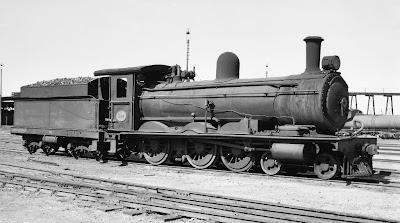 More technical information about the 6D class is available on Wikipedia. 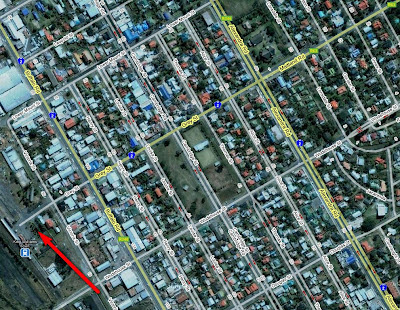