When we visited on 18 Oct 2007 this locomotive was parked in front of the museum entrance. 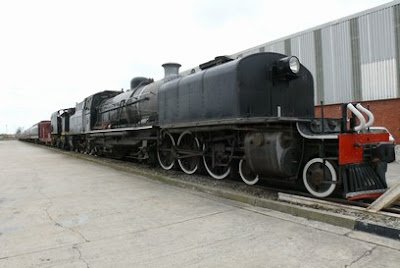 These were designed for both goods and passenger trains hauled on branch lines and saw service in Natal, Transvaal, Free State and the eastern Cape. A total of 65 of this class was ordered - #2401 was supplied in the 1st batch of 37 engines in 1927 by the German firm of Hanomag. 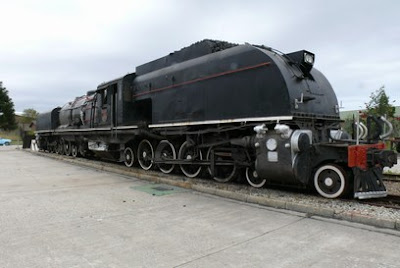 50 of these locomotives were built by Beyer Peacock between 1945-1947. Used initially on the Natal north coast line, the Franklin branch and the Montagu pass, some were later used on the Cape Town-Caledon branch until withdrawn by 1976 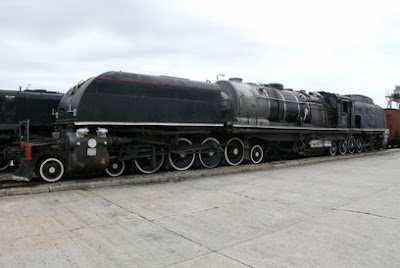 They were the first SAR engines to have the streamlined Beyer Peacock watertanks, and the only post-war Garatts in the SAR fleet not to have mechanical stokers. 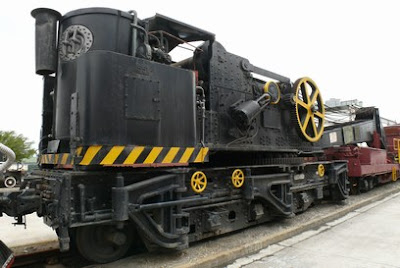 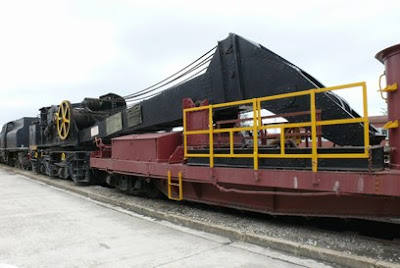 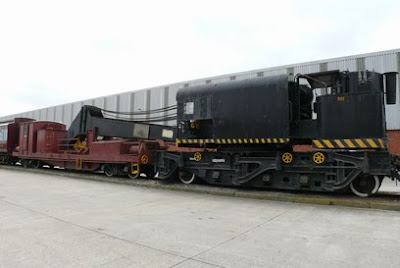 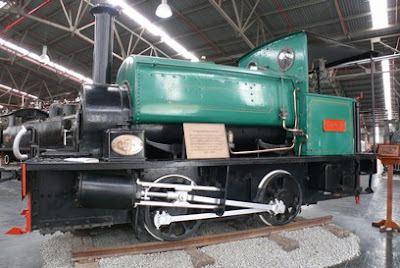 This is the first locomotive on display as one enters the museum.

It was first used by the Cape Colony Public Works Department in the East London harbour. During WW I, the SAR was extremely short of motive power, and obtained a number of locomotives from private concerns. The Public Works Dept. of the Cape Province had two Hudswell, Clark & Co locomotives which it could spare, and made a present of these to the SAR in 1916. In the PWD they were listed as No 1 en No 2, works no's 686 and 687, and were named Thebus and Stormberg respectively.

Thebus has caused many arguments regarding the correct spelling of the name, whether it should be one word or two, reading The Bus. Actually, it was named after the little town of Thebus on the Stormberg-Rosmead line, now known as Teebus, while Stormberg was named after the town of that same name on the mainline from Bloemfontein through Springfontein to East London.

Stormberg spent most of its life at East London, latterly on testing the steam-heating equipment on passenger stock. During WW II it was sent to Cape Town to assist in the construction of the new harbour works, and from there it was sent to Mossel Bay to do the harbour shunt. It finally found its way to the Germiston loco sheds, where it was stored for a number of years, before being sent to the East London workshops to be restored and mounted at East London station. The restoration was carried out to drawings obtained by Frank Holland from Ron Redman of Leeds, England, and it is the only representative left of these once numerous little "pugs". 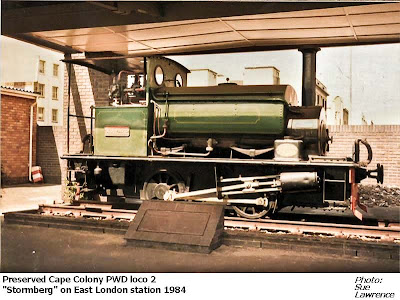 The saddle-tank locomotive was unveiled in restored condition on 10 May 1980 on the occasion of the centenary of the opening of the railway between East London and Queenstown, and was on display for some years at the East London Station, when Sue Lawrence took this picture in 1984. This photo was 1st posted here on www.sa-transport.co.za. 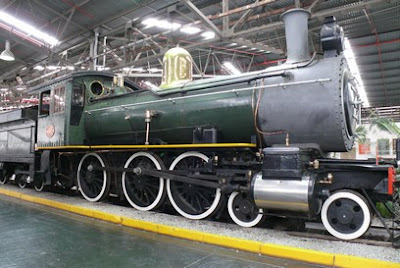 #645 class 6J - Engine 645 was stationed at De Aar between 1958 and 1967 and was later mounted on Kimberley platform as a monument. She was still later, removed from the platform and restored to working order by the THF for use on enthusiast specials. She is now housed here in the OTM at George. [Source: 23 May 2010 Les Pivnic (former SAR Museum curator) in the sar-L forum]

The most successful bar-framed 6th class, were the 14 locos supplied in 1902 by Neilson, Reid & Co. Used initially on the Cape main line, they became the Class 6J on the SAR. 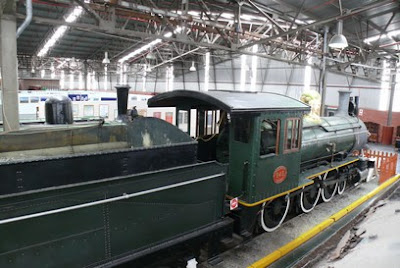 The last engine of this type was withdrawn from service in Bethlehem in 1972. 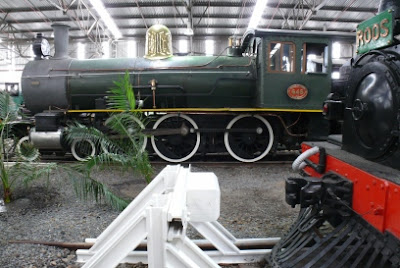 Drawing of the SAR Class 6J 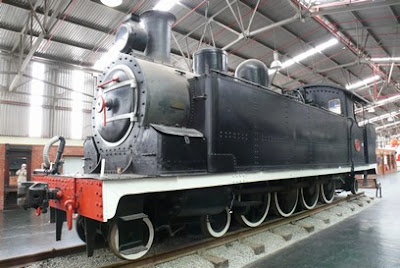 #330 class H2 tank locomotive.
4-8-2T
Originally these locos (when still SAR Class H) had 10 driving wheels; when later relegated to shunting work, these "Reid ten-wheelers" were prone to derailment in many goods yards. Accordingly, they were converted between 1910 and 1922, to a 4-8-2T configuration by simply removing the trailing coupled wheel, and closing off the frame opening, to become SAR class H2. 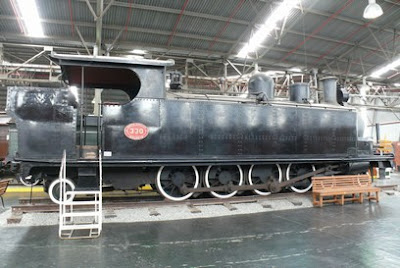 #330 SAR Class H2 - in this picture the position of the missing 5th coupled axle is easy to spot. Originally this was a SAR Class H with a 4-10-2 wheel configuration, but when converted to 4-8-2's, these became SAR Class H2.
This class was used extensively for shunting in many parts of the country. The last ones to be in service remained on the Bluff (Durban harbour), until 1977, because of their light axle loading.

The problems of designing a tank engine, to haul at least one-and-a-half times that of the 'Dubs A' (SAR Class A), on the Natal main line, led G.W. Reid, locomotive superintendent, to the 4-10-2T wheel arrangement. In order to negotiate sharp curves, both the front and rear driving wheels were flange-less. They used saturated steam, and the 'D' valves were controlled by the Allan link motion. Between 1899 and 1903, 101 engines were built for the NGR (Natal Government Railways) by Dubs and Co, and later the North British Locomotive Co. 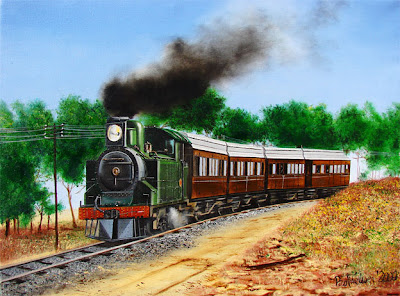 This 2009 painting, made by Paul Treleven, is shown here by kind permission of the artist. The painting pictures a scene around 1900-1910: a NGR passenger train headed by a 'Reid ten-wheeler' (the later SAR Class H) For more of Paul's work you may visit his fine arts page at http://www.paultreleven.com/

Known on the NGR (Natal Government Railways) as the 'Reid ten-wheelers' they were employed extensively on the lower section of the Natal main line. Even after more powerful locomotives arrived, they continued to be used on this section, while some were sent to De Doorns, to do banking duties in the Hex River Pass. When acquired by the SAR, they became the Class H, until conversion to 4-8-2T (see Class H2 #330 as shown earlier in this entry).
During the South African War in 1902, the Imperial Military Railway ordered 35 locomotives of the NGR 'Reid ten-wheeler' type. To ensure rapid delivery, the order was split between Dubs and Co and Neilson, Reid and Co. Under the CSAR many of the Class Es, as they were known on this railway, were converted to tender engines, becoming SAR Class 13, while the six remaining were converted to 4-8-2T by the removal of the trailing driving wheel and blanking-off of the opening in the frame. In this form, the five engines (one was withdrawn in the interim) were inherited by the SAR to become Class H1. The last of this class was withdrawn from service in 1966.
Read on in part 2