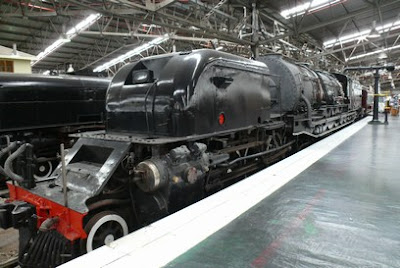 #4070 class GMA/M
4-8-2+2-8-4
A modern successor to the GM class, no less than 150 of these Garratts were delivered 1954-56. The orders were split between Beyer, Peacock, the North British Locomotive Co and Henschel. The extra M indicated when the loco was intended for main-line use - the main-line engine would only differ in having a larger coal and water capacity. 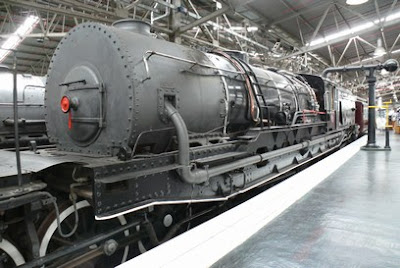 Like the GM's these locomotives trailed an auxillary water tank. These ubiquitous engines saw service on most secondary lines in the country. They were the last class of Garratt in service with the SAR and were being withdrawn from regular service in 1984.

The Class GMA/M is also depicted on a 25 June 2010 stamp release by the South African Post Office. (SAPO). This image is published here by kind permission of SAPO. 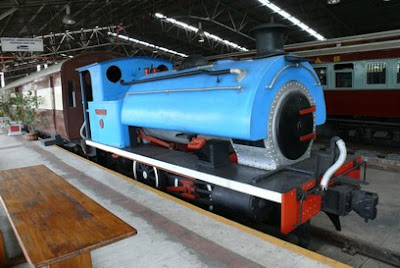 The "Swartkops" 0-4-0ST locomotive with the "ESC" (Electricity Supply Commission) badge. This 3' 6" gauge loco was used by the Port Elizabeth Municipality at the Swartkops Power Station near Port Elizabeth. This locomotive was built in 1951 as works number 7685 by RSHN (Robert Stephenson & Hawthorns Ltd located in Newcastle-on-Tyne) 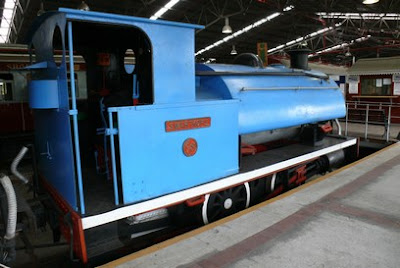 Another view of the "Swartkops" engine. This engine was formerly preserved at the 3'6" siding at the SAR Narrow Gauge Museum at the Humewood Road Locomotive Shed, before she was moved here into the OTM.

Related RSHN engines are George and Elizabeth plinthed in Johannesburg. 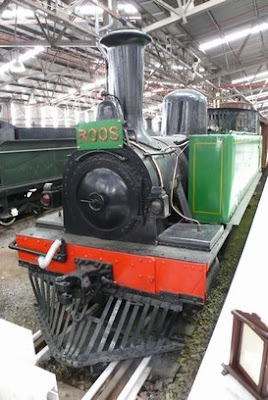 This loco with the surname "ROOS" was one of 175 locomotives build in Germany during the years 1892-98 by the Emil Kessler factory for the NZASM (Nederlandsche Zuid-Afrikaanse Spoorwegmaatskapij). Very few of these locos survived the Anglo-Boer war, after which they later became SAR Class B. 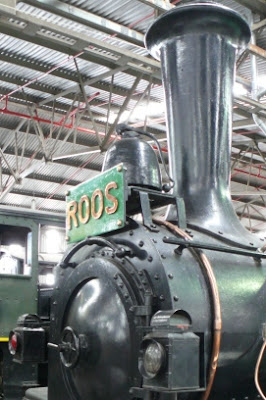 Note the bell assembly fitted behind the name "ROOS" 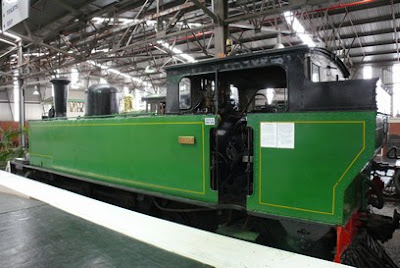 The following information extract about the ROOS was compiled by the late Richard Searle, and published in an article titled "THE STORY OF 'ROOS'" in the NZASM - Memorial Issue (April 1987 edition) of Pretoriana as digitised by the University of Pretoria's Library Service and downloadable here.

The History of the locomotive named ROOS

The 1st loco in it's class, Number 61 in the 46-tonner class of the NZASM, named 'Roos', was built by Emil Kessler of Esslingen, Germany, in 1893. She was assembled in East London and was worked over the CGR lines to the Transvaal. The date of her being placed in service is uncertain, but it seems likely that she was used on the Pretoria - Johannesburg line during 1894.

There is a possibility that she was allocated to the Pretoria - Delagoa Bay line from January 1, 1895, as the 46-tonner class locomotives had been ordered for this line. She was probably worked there until the Anglo-Boer War broke out in 1899.

The NZASM continued to operate during the Anglo-Boer War, until its properties were put under the control of the IMR. 'Roos' is likely to have remained undamaged during hostilities. Although the CSAR assumed control of the Transvaal railways after the war, the NZASM continued in existence until 1908, and 'Roos' was taken into the books of the CSAR for the first time in that year.

The CSAR operated from 1902 to 1910, and placed a number of new locomotives in service during this period, and 'Roos'" is likely to have continued working on the Pretoria - Delagoa Bay line. After the railway line between Waterval Onder and Waterval Boven had been reconstructed and the rack railway demolished in 1908, "Roos was probably brought to the Witwatersrand and used to haul suburban passenger trains.

With the establishment of the Union of South Africa in 1910, the CSAR, together with the Natal Government Railways (NGR), and the CGR were combined into the SAR, but for practical reasons, the CSAR continued to operate until 1914. Roos was not included in the 44 locomotives which came on to the books of the SAR, as the CSAR had sold her to the Simmer Deep Mine in 1911. Simmer Deep, and the adjacent Jupiter Gold Mine, shared the services of 'Roos', where she worked on the lines to these two mines between Jupiter and Driehoek until 1919.

'Roos' was bought by the VFP in 1919 and thoroughly overhauled at the Rosherville workshops of the company. Another ZASM locomotive No. 197, named 'Kracht', and 'Roos' were allocated to the Brakpan Power Station in 1920 to replace the Kitson locomotive 'Kitty' and a Hunslet locomotive, that had been transferred to the Rosherville Power Station. 'Kracht' and 'Roos' hauled coal trains from Modrea Station, over a distance of 4 km, to the Brakpan Power Station. Escom took over the VFP in 1948, and 'Roos' was again transferred to the books of the new owner.

When a portion of the Clydesdale Colliery collapsed in 1960, and 435 mineworkers lost their lives, it became necessary to bring coal in by rail, and 'Roos' was on temporary transfer to the Taaibos Power Station, where she hauled trains from Coalbrook Station to Taaibos, and Highveld Power Stations, until the coal mine was re-opened in 1961. Brakpan Power Station closed down in 1963, and 'Roos' returned to the Rosherville Power Station.

When Escom withdrew the older power stations from service, a number of locomotives were put up for sale. 'Roos' was sold to Geduld Mine - a goldmine, in 1964, were she was used for hauling ore trains from the various shafts to the central reduction works. The main activities of the mine centred on cleaning-up operations at this stage, and when it finally closed down in 1967, 'Roos' was sold to SAPPI, the largest paper manufacturer in South Africa. 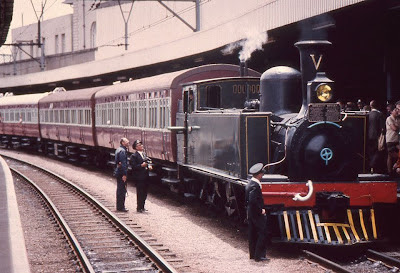 August 17, 1970 witnessed a very special event on the railway line, which had been of such importance, to president Kruger and the Transvalers, in their long struggle for independence. The 75th anniversary of the Delagoa Bay railway line took place that day, and 'Roos' was used to haul a special train from Waterval Onder to Waterval Boven. She was temporarily renamed 'President Kruger' for this commemorative trip. Mr. Ben Schoeman, who was Minister of Railways and Harbours at the time, and who had initially joined the SAR as a fireman, acted as driver over the last part of the journey up to Waterval Boven.

6. Acquired by the SAR

The SAR acquired 'Roos' for the first time in 1971. Although kept on the books of the CSAR, the locomotive had technically belonged to the SAR, for one year, before she started on her long journey from one owner to another. Six months after the commemorative trip on the Delagoa Bay line, the SAR presented SAPPI with a class 10C no. 772 locomotive, and received 'Roos' in exchange. The veteran locomotive has now ended her wandering and is kept at the Germiston locomotive depot in trust for the SAR museum. 'Roos' is the only ZASM locomotive still (in 1987) under steam, and was used from time to time for special journeys or scenes in television and movie films.

Technical details of the locomotive 'Roos' 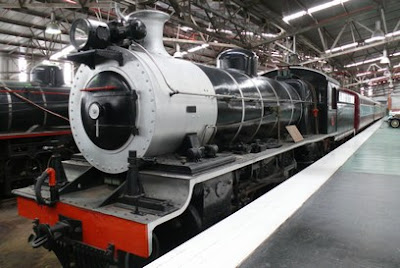 SAR class 16B "Pacific" (4-6-2) No 805 - one of 10 put into service in 1917 after being built by North British Locomotive Co. She was later re-boilered and became a 16BR but, following withdrawal in June, 1972, she was re-fitted with an original style Belpaire firebox and became a Class 16B again. The cosmetic changes to return it to its original appearance involved fabricating a dummy 16B boiler - the original Hendrie cab, which Les Pivnic (then the SAR Museum curator) found in the old Pretoria Mechanical Workshops. She was put on display at Johannesburg Station forecourt.

A former South African minister of Transport (1954-74) - Ben Schoeman - worked as a fireman on this engine from 1931-33 at the Braamfontein Loco shed. 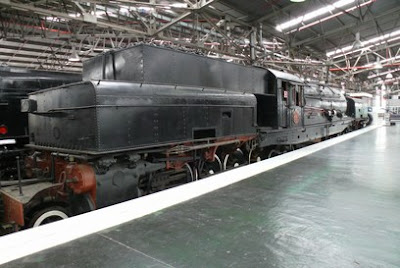 The 8 engines in this class, delivered in 1929 and 1930 by Beyer Peacock, were the most powerful steam locos to operate on the SAR. They were designed for working goods trains on the Natal main line. High axle load limited their service to main lines laid with heavy tracks. Electrification led to their eventual withdrawal in 1972. 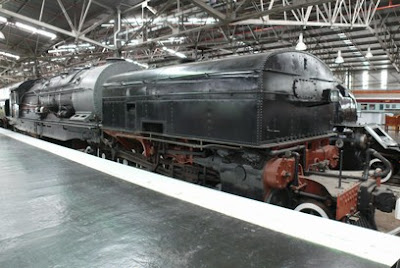 Considerable problems were experienced with fumes filling the cab when passing through tunnels. A blower driven by a steam turbine to suck clean air from ahead of the chimney was tried out, but eventually the locomotives had to be run with the chimney trailing when ascending a gradient in a tunnel.

SUMMARY of items on display in OTM
December 2005

In December 2005 Dylan Knott posted this summary to the sar-l forum of what was to be seen at the OTM and George station:

I did a quick stock-take of the OTM as well.

A somewhat unusual display in the George OTM museum, is this working scale model of a SHAY geared locomotive.  This particular engine has a two cylinder design. American Shay logging locomotives were designed to climb the steepest grades, swing around hairpin curves and negotiate frail temporary tracks. In addition, they had to haul incredibly heavy loads, from woods to mill. Power was all-important. 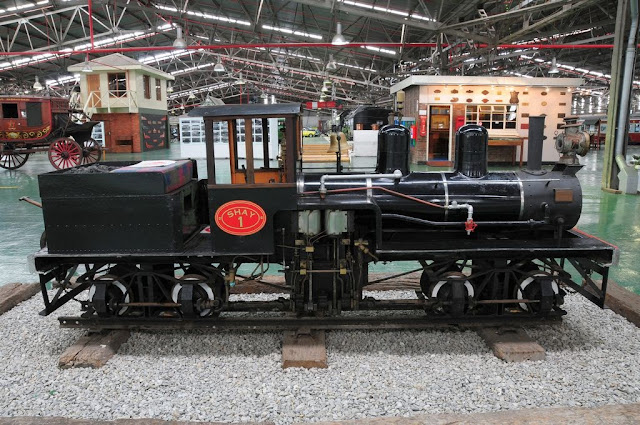 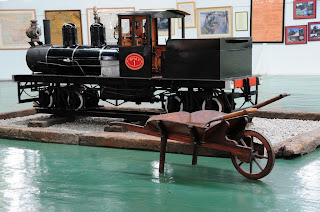 Peter Greeff noted in the sar-L forum: "The Shay was built for the late Jan Hugo, a farmer near Loxton. He donated it to the Lions club who had a track at the end of York Street (George). Trains ran during weekends."


"However, service was a problem and eventually THF had it serviced at Voorbaai. New track was laid at the museum and two qualified drivers operated the train. Ticket money was a problem at one stage. With time, the little railway was abandoned." 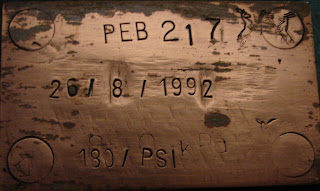 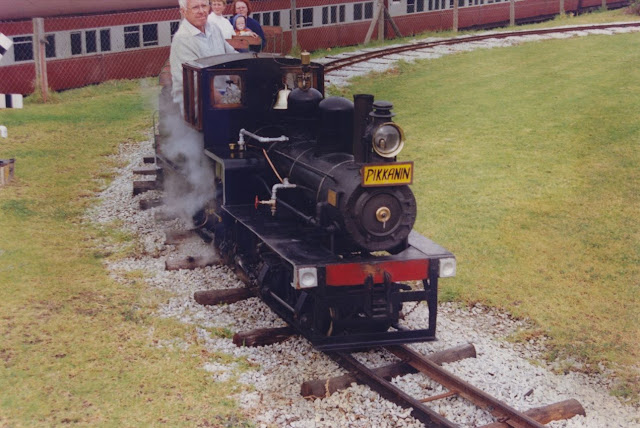 This about 2003 picture (posted in sar-L forum) by Bob shows the SHAY 1 in action in the grounds of the OTM in George. Bob noted: "When I arrived in George in 2003 it was being used on an oval track adjacent to the Railway Museum for childrens rides. It ceased operating around about 2005 and was moved into the museum." 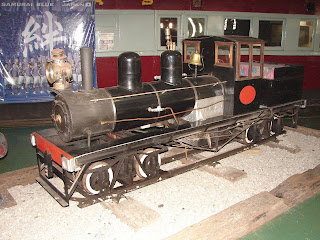 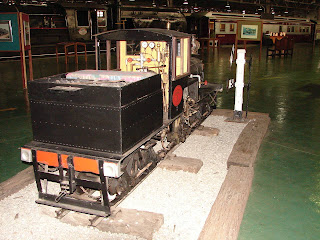