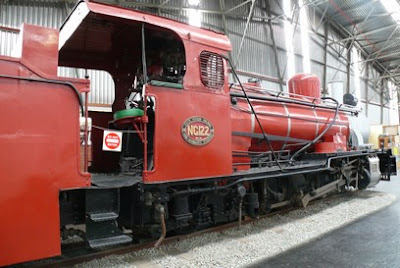 #NG122 of the Narrow Gauge Class NG15 affectionately known as "Kalaharis". NG122 was built in 1950 by the Belgian firm of Société Anglo-Franco-Belge and operated in Southwest Africa on the branch line to Otavi until the conversion of the narrow gauge lines in SWA to Cape gauge. 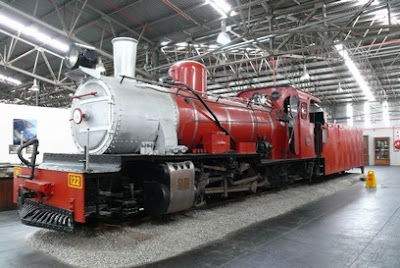 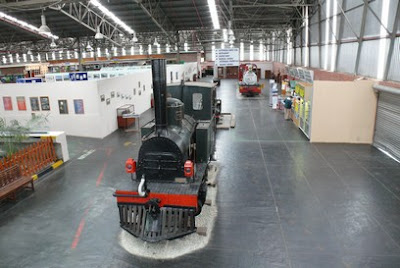 The ZASM loco center in this picture was declared (on 6 April 1936) a South African national monument - it was the first locomotive to operate in the old Transvaal Republic. This event took place on 17 March 1890 when this locomotive hauled the "Randtram" from Braamfontein to Boksburg. 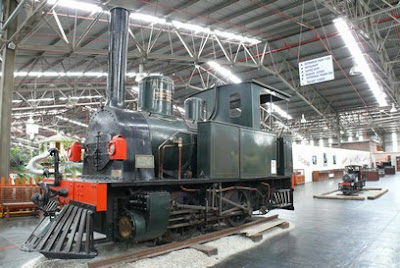 The ZASM 14 tonner Emil Kessler 'Randtram' locomotive was taken out of service in 1903 after having done about 181 000 km of service. The locomotive stood at Pretoria station for many years -- when the museum moved in 1972 to the old 1932 Johannesburg station, this locomotive returned to it original place of service. 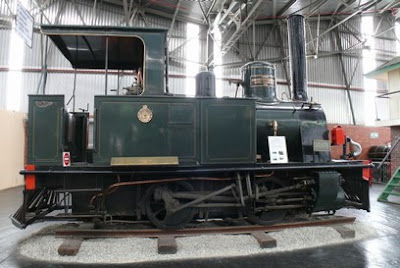 Note the National Monuments plaque on the side of the loco. The engine weighs 12,7 tonnes and was manufactured by Emil Kessler of Esslingen in Germany. It was brought from the coast by ox-wagons and was unloaded piece by piece in the open veld at Elandsfontein (Germiston) where it was assembled in 1889 by A.W.Fohren and two mechanics. 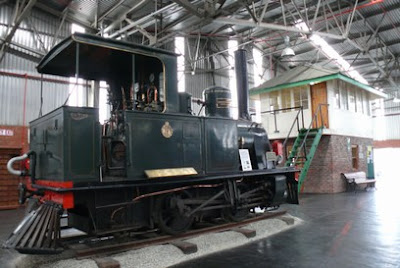 The engine cost R3430. Unlike the other ZASM engines, this one (number 1) has no distinguishing name. [source: Historical Monuments of South Africa] 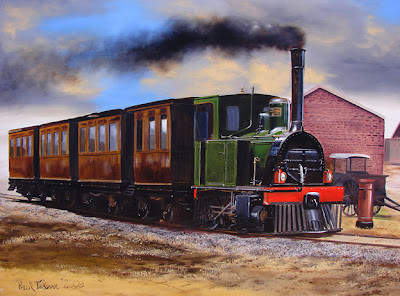 This 2009 painting, made by Paul Treleven, is shown here by kind permission of the artist. The painting pictures the "RANDTRAM" (see above) in steam. For more of Paul's work you may visit his fine arts page at http://www.paultreleven.com/ 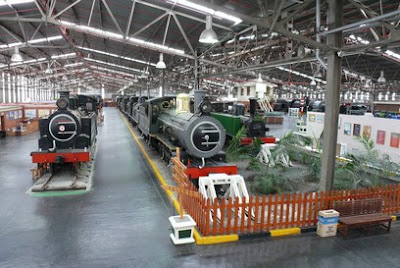 A general view of the Museum display hall made at the top of the green stairs of the signal house visible in the previous picture. 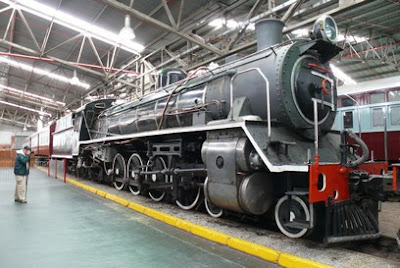 #2439 - a Class 19C loco. 50 were delivered in 1953 by North British Locomotive Co - some worked on the Reef, but during WWII all were concentrated in Cape Town from where they worked on branch lines. All were with drawn from service in 1978 except #2439 which was kept in service and occasionally used for specials. 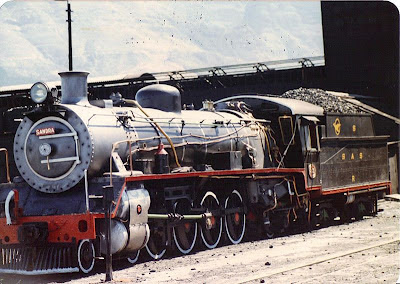 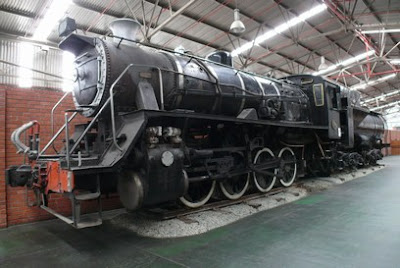 #3706 - a Class S2 shunting locomotive. These were designed for running on lightly laid tracks as were found in harbours. A very small boiler, note the lack of the smaller front wheels, the Vanderbilt tender had a modification to the coal bunker to improve driver vision. These locos were not popular with their crews due to poor steaming characteristics. A 100 of these Krupp locos worked in Durban, Cape Town & PE harbours from 1952-83. SAR engine No 3706 was built as Krupp works no 2971 in 1952, and this particular locomotive left the factory on 06.10.1952 to be delivered to the South African Railways Stores Dept, Johannesburg. 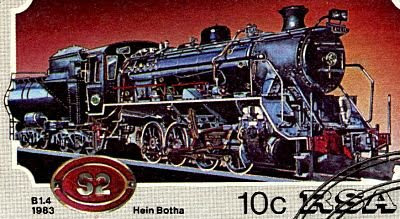 This stamp features South African Railways class S2 light shunting locomotive number 3781 (not the one in the museum!). Designed under the direction of Mr. L.C. Grubb, Chief Mechanical Engineer, for shunting work especially in harbours, these locomotives were built in Essen, Germany, by the Fried Krupp Lokomotivfabrik. [as Krupp factory number 3046/1953]. They were placed in service during 1952-1953. The wheel arrangement is 0-8-0, total mass in working order 170 tons and the tractive force 157 tons.