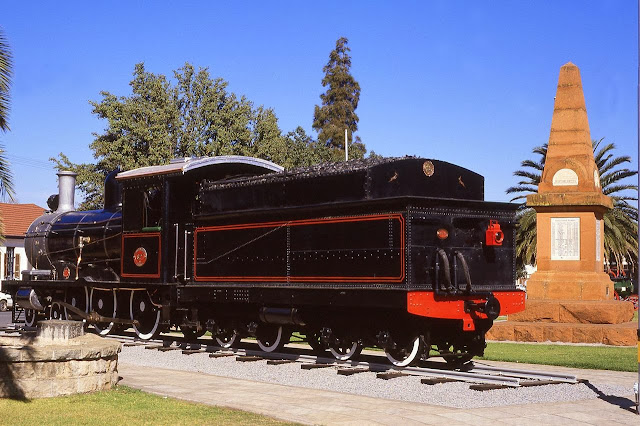 This image, taken at the Mafikeng Museum, of SAR Class 6H no 629, was kindly provided by Phil Braithwaite. The photo dates from the latter half of 1985/first half of 1986 and shows the cosmetically repainted and replinthed engine in all her splendour! 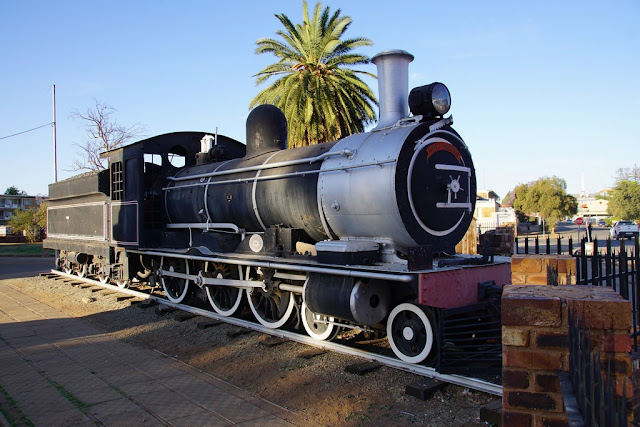 ABOVE: This 2016 image is by kind permission of the photographer Laurie Mulrine, this image was first posted on flickr here: SAR Class 6H: 627, Mahikeng / Mafeking, North West Province. 05.10.2016. 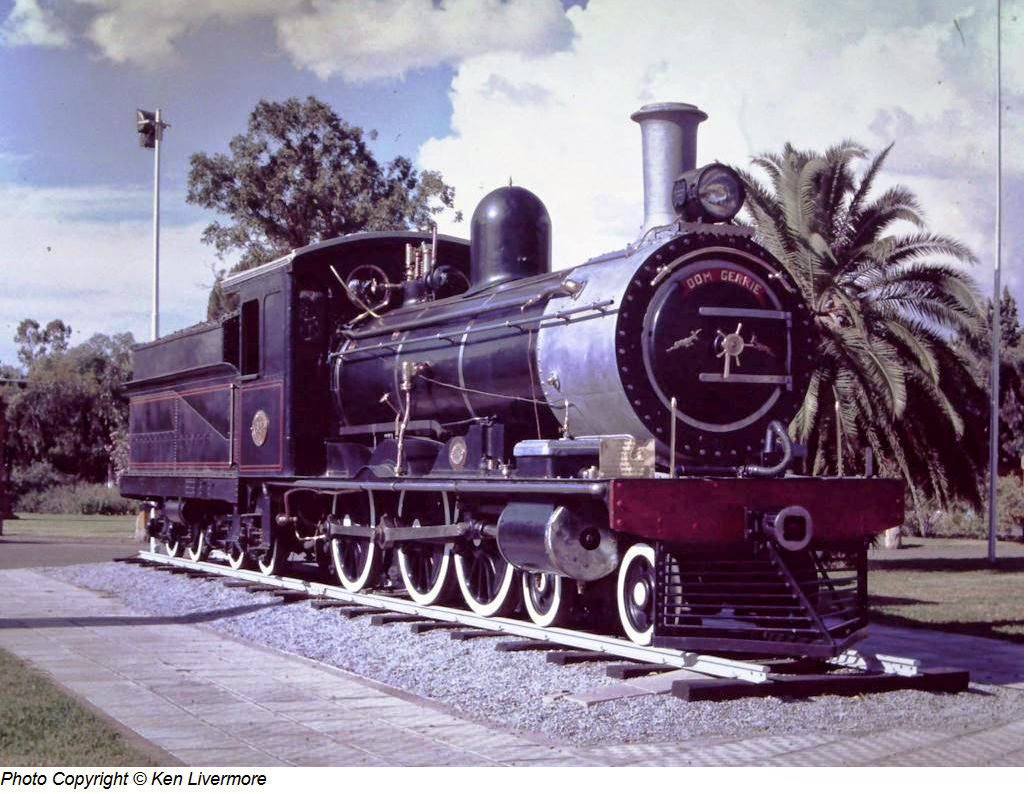 Gerrie Botha used to drive SAR class 19's engines for 30 years. One week he worked the Mafikeng-Warrenton line, the next week he was into Botswana and back. After his retirement from the SAR, he applied by letter on 9 October 1984, to SATS (South African Transport Services) for a class 19 to be made available for the museum in Mafikeng. His motivation that these were amongst the most beautiful classes to have worked the SAR. The reply was negative - no class 19's were available. However, in March 1985 SATS instead provided the rare (only 5 were built) specimen of the Class 6H no 629 for the museum - at the time this locomotive was plinthed at Mafikeng station since 1972. With 2 sets of rail tracks the engine was soon leapfrogged from the station to the museum. Council labour was employed to cosmetically restore the old work horse.

Peter Sinclair wrote this account for the sar-L railway interest group about the days when this locomotive was replinthed at the Mafikeng Museum: 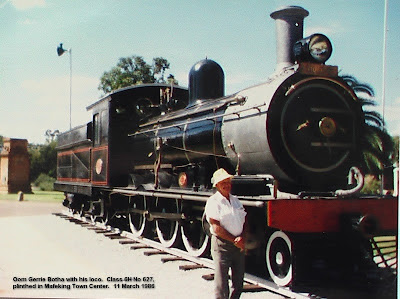 Oom ("Uncle") Gerrie Botha with his loco Class 6H No 627 plinthed in the Mafikeng Town Centre. This 11 March 1986 Photo courtesy of Peter Sinclair.

"The pictures tell the story of one man's dedication to the loco that was once allocated to him during his active working life on the SAR. Retired at Mafeking, Gerrie Botha, was the Superintendent of the Mafeking Sewage Treatment Works when I met him, and I had known him for some time during routine monthly inspections of his plant, one of several in the Western Transvaal." 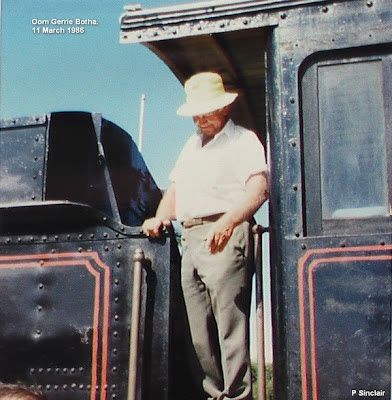 "I had yet to discover the existence of the RSSA at the time, and I tended to hide my interest in railways, and steam in particular, under a bushel, so to speak. People seeing you photographing trains, and hearing of your interest in steam engines, would look at you like some kind of nut." 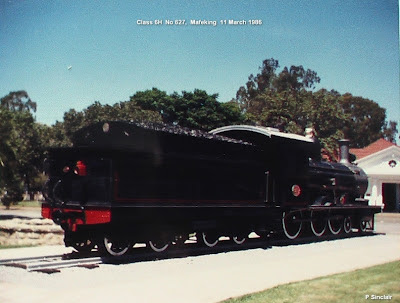 "Seeing some oil cup lubricators lying in his workshop one day. I struck gold when he told of the realization of his dream, and he told me the story of 627. Pulling strings with his connections on the SAR, he had organized two sets of tracks, and they had leap-frogged 627 into position on the authorized spot in town." 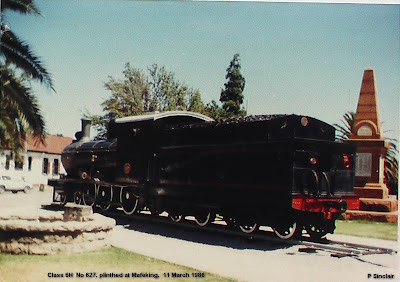 
Thereafter, using Council labour, the cosmetic restoration was ongoing, never satisfied until immaculate in every detail, and he watched over his baby like a hawk. Invariably we would adjourn to his loco to check on progress." 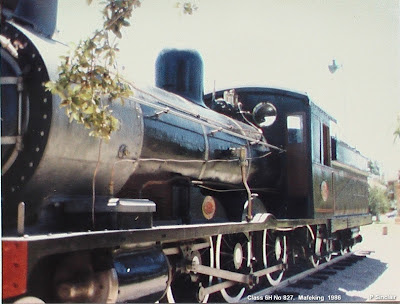 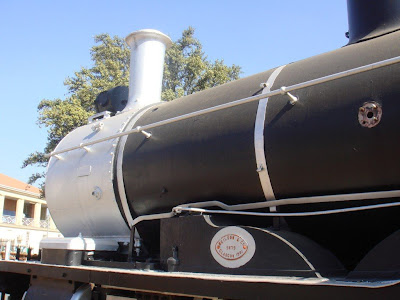 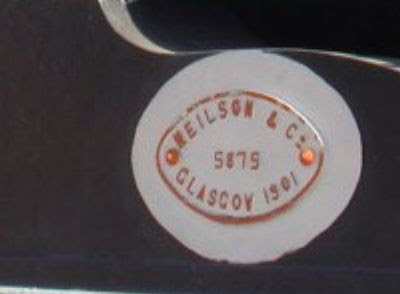 This 1983 stamp depicts No.627 SAR Class 6H locomotive in service. No. 627 is now plinthed in front of the Mafikeng Museum.

Mr. H.M. Beatty, Chief Locomotive Superintendent of the Cape Government Railways (CGR), designed the Class 6H locomotive. Locomotive No. 627 was built by Neilson Reid and Co. as works no 5875 in 1901. It was in service until 1971, and erected as a monument at Mafikeng railway station in 1972. The locomotive has a 4-6-0 wheel arrangement, the total mass in working order is 94 tons, and the tractive force 84 kN. A good place to start a tour of Mafikeng is at the Museum, situated in Martin Street. The displays are superb, and the curator holds the keys to a number of historical sites around the town. The Museum is housed in the former Old Town Hall, built in 1902. This ornate building dominated the centre of the town at the time. With its impressive steel ceiling, old town clock and elaborate architectural style, the museum itself deserves a visit. Outside the museum rests a 6-H class steam locomotive. Its was constructed in Scotland in 1901. This locomotive pulled trains on the route between Mafikeng and Bulawayo until 1971. In 1985 it was moved from the railway station to its present position. The last plate-framed 6th-class locomotives built for the CGR were 21 supplied by Neilson, Reid and Co in 1901. Their boilers were again enlarged, and were fitted with Beatty's large cab. They became the SAR Class 6H. 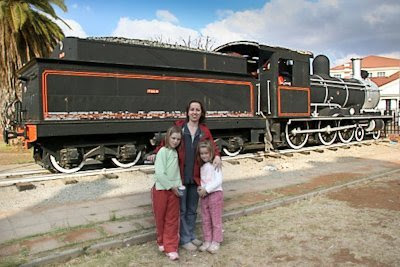 On 13 July 2008 Duncan Burnett visited the Mafikeng Museum, and took these pictures of the locomotive and his family. You may read his journal, and see his original web photos here. 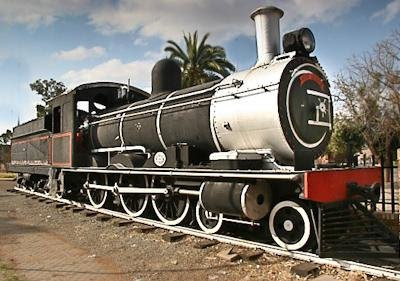 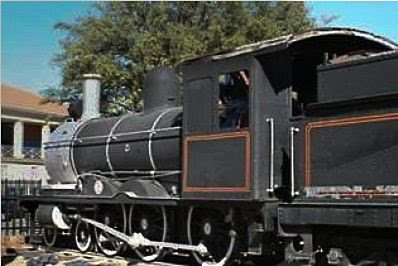 This picture was taken by Piet Redelinghuys and published in the October 2008 issue of the Steam in Action newsletter. 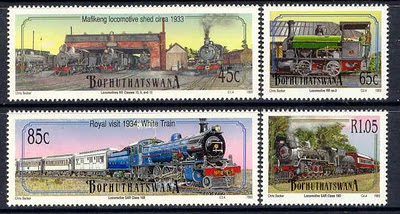 One of these stamps shows the Mafikeng locomotive shed around 1933. 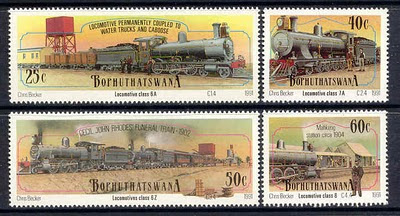