Kerr Stuart & Co Ltd was a locomotive manufacturer from Stoke-on-Trent, England. It was founded in 1881 by James Kerr as James Kerr & Co., and became Kerr, Stuart & Co from 1883 when John Stuart was taken on as a partner. Kerr Stuart were known for producing a number of standard designs with many engines being built for stock and sold 'off the shelf' to customers. The names of these locomotive types were often derived from the purchaser of the first of that type or from the name it was given.

The first narrow gauge railway in the Cape Colony was in territory bounded entirely on the landward side by German South-West Africa. Initially projected merely to connect the jetty with the town, the Walvis Bay Railway was opened in 1899 and ran for twelve miles up north to the German border at Plum. This old photo from the Hunslet archives shows the HOPE with the wheel covers raised. The covers protected the moving parts of the locomotive from the harsh desert environment.

On 6th March 1899 the Agent General for the Cape of Good Hope ordered a "Sirdar" class locomotive named HOPE which was almost as long in transit to Walvis Bay – where it arrived on 22nd August 1899 on board the British barque Primera – as it had been in the building. Because of the extremely light nature of the track (12 lb. rail with sleepers spaced three feet apart) HOPE was provided with an additional pair of carrying wheels at both ends. Thus the standard 0-4-0T type was converted to a 2-4-2T type. Even so the maximum axle load of HOPE in working order would be about 1¾ tons, which is considerably more than today’s suggested figure for this category of track of 1 ton 4 cwt. Within six years the railway was virtually moribund and by 1915 HOPE had been laid aside and forgotten. That was because the Germans preferred to use their own harbour in Swakopmund. [Source: Most of the former paragraph was obtained from the THE INDUSTRIAL RAILWAY RECORD issue No. 37 - p78-85 JUNE 1971.]

Another old Hunslet archive photo showing the HOPE with the wheel covers lowered. 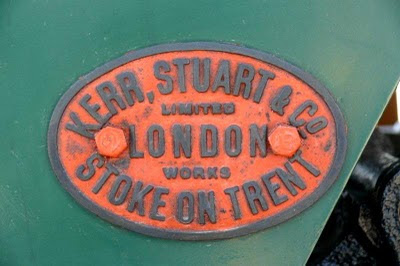 The little 2-4-2 was built in 1899 by Kerr Stuart & Co of Stoke-on-Trent, England. It had inclined cylinders with a diameter of 6 in., placed outside the 0.625-in. plate frames, which where outside of the coupled wheels. D slide valves were operated by Stephenson link motion through rocker arms. The coupled wheels were 24 in. in diameter while the leading and trailing wheels were 14 in. The boiler pressure was 120 lb/sq. in., the total heating surface 102 sq. ft., and the grate area 3.5 sq. ft. There were 36 boiler tubes, each with an outside diameter of 1 3/4 in. The distance between tube sheets was 61 in. and the outside of the boiler was 25 in. in diameter. The capacity of the side tanks was 100 Imperial gallons and that of the bunker 1/4 ton. The tractive effort at 75% boiler pressure was 1020 lb. and the total weight of the locomotive in full working order was 12 tons. 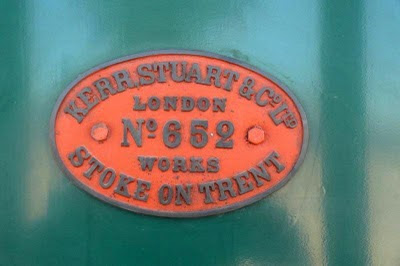 December 2010 photo kindly provided by Louis Conradie.
The construction number of the HOPE was 652. As far as it is known the HOPE never had a road number. [Source: "Namib Narrow-Gauge" by Sidney M.Moir & H.T.Crittenden published 1982.] Photo taken in 1961 by my father, H.D.Conradie, in front of the Windhoek station building.

After forgotten for some time in the backyard of an establishment in Walvis Bay, the HOPE was repaired in the railway workshop at Usakos, given a coat of paint, and turned into a National Monument in front of the Windhoek station building. The HOPE locomotive remained in Windhoek until 1963, when she was moved to the outside of the newly completed Walvis Bay station building - thus returning to the area where she had started her working life 64 years earlier. The locomotive was enclosed in an enclosure to lessen the corrosive effects of the coastal weather.

The previous two pictures were taken in July 1997 in Walvis Bay. 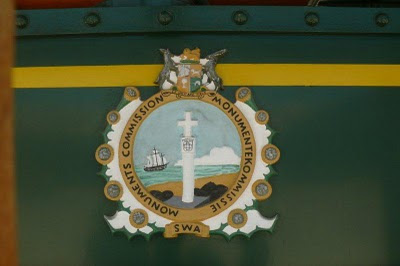