.
This Locomotive is on display near the entrance to the Caravan Park in Barberton. The 4-6-0 locomotive SAR Class 6B engine no 536 was built in 1898 by Neilson, Reid and Co as works no 5321.

We visited the locomotive on 31 May 2004, and these pictures are from that visit. 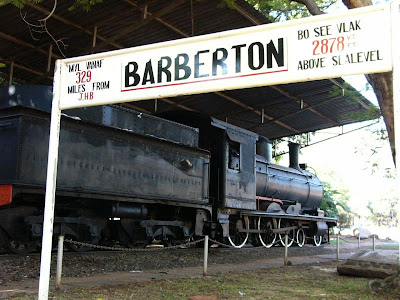 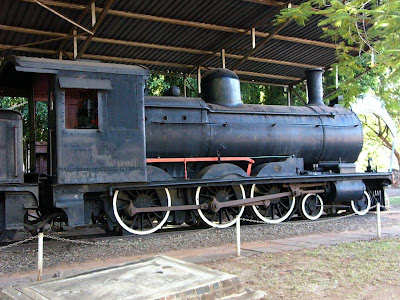 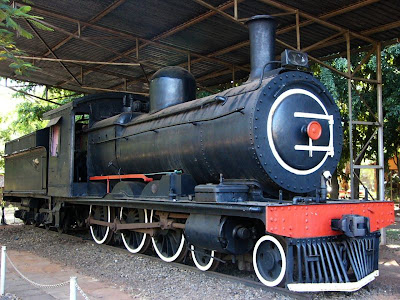 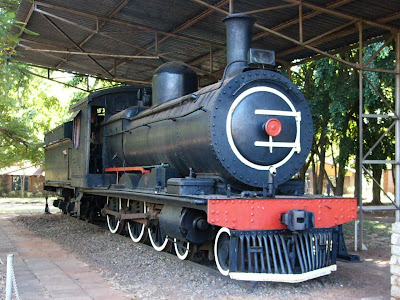 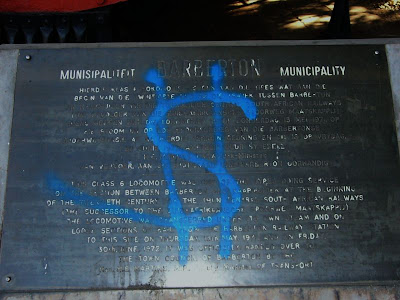 This plaque in front of the locomotive reads:

THIS CLASS 6 LOCOMOTIVE WAS ONE OF THE TYPES DOING SERVICE ON THE SECTION BETWEEN BARBERTON AND KAAPMUIDEN AT THE BEGINNING OF THE TWENTIETH CENTURY FOR THE THEN CENTRAL SOUTH AFRICAN RAILWAYS (THE SUCCESSOR TO THE ZUID-AFRIKAANSCHE SPOORWEG MAATSKAPPIJ) THE LOCOMOTIVE WAS TRANSFERRED UNDER ITS OWN STEAM AND ON LOOSE SECTIONS ON RAIL FROM THE BABERTON RAILWAY STATION TO THIS SITE ON THURSDAY 13th MAY 1971 AND ON FRIDAY 30th 1972 IT WAS OFFICIALLY HANDED OVER TO THE TOWN COUNCIL OF BABERTON BY THE Hon. H.E. MARTINS Deputy Minister OF TRANSPORT. 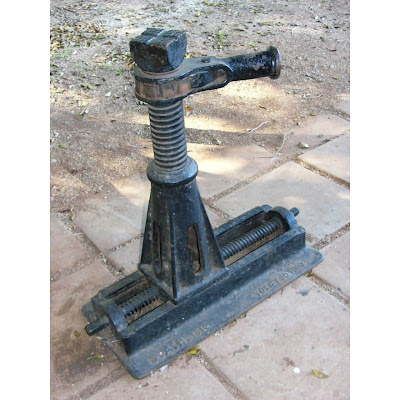 Two of these jacks were part of the display. The lettering at the base of this jack reads:
SAR 1912 TO LIFT 30 TONS. 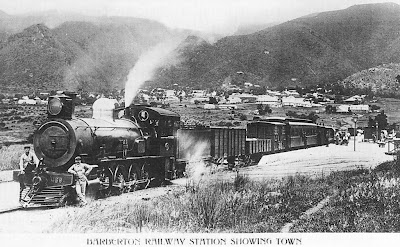 This postcard shows Central South African Railways (CSAR) engine no 468 at Baberton station sometime between the years 1903 to 1910. CSAR 8L-2 engine no 468 was built in 1903 and in 1910 it was renumbered to SAR no. 1159 under the new railway administration and grouped in SAR Class 8B. This engine was works no 15800 from NBL. The picture clearly shows the engine's polished brass dome (and not so clear - chimney caps and boiler bands) introduced by the Imperial Military Railways previous order for Class 8ths. After the Anglo-Boer War the batch of 30 CSAR 8L-2 locomotives were ordered in 1903 to remedy the position regarding the comparative small number of locomotives immediately available for service and to prepare for an expected increase in traffic. 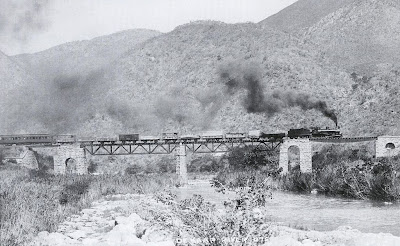 This railway postcard shows a typical train of the period being worked on the bridge over the De Kaap River not far from Baberton. 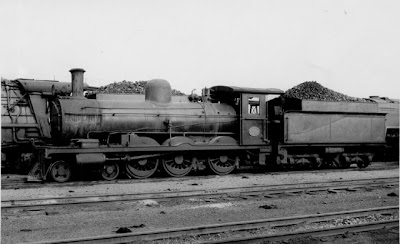 Specifications for SAR Class 6B may be found here.

Sources:
Posted by Piet Conradie (for e-mail addr: see profile plse) at 9:10 AM