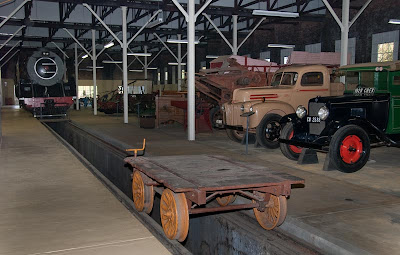 The 4-8-2 locomotive SAR Class 15F engine No. 2994 is stationed over the locomotive inspection pit in the old Locomotive Shed. The locomotive was a WW II wartime delivery - built in 1944, as works no 7109, by Beyer, Peacock & Co Ltd of Manchester, England. It is now preserved in the old locomotive shed at the Worcester Museum (Kleinpl on the outskirts of Worcester, Western Cape.

In the book THE SPIRIT OF STEAM, co-authored by AW Smith and David Bourne in 1983, David wrote:

"The task of servicing engines and preparing them for their next journey goes on around the clock. On arrival at the loco depot, the fireman and driver will book off, and the duty shed man will take over, and move the locomotive. The fire will be cleaned, the clinker being removed with long fire irons."

"At the larger depots, this takes place over water-filled troughs to douse the hot ashes. The tender will be filled with coal and water, before the running motion, and underframe are examined in inspection pits between the rails. If necessary, the smokebox door will be opened, the spark arrestor cleaned and the char which had collected there, removed."

"At regular intervals, the dirt and oily grime which have accumulated on the valve gear and underframe are removed with the aid of a steam lance. When, at regular intervals, the boiler needs washing out, the fire is completely extinguished. If however, the engine is to be used the next day, the fire will be kept alight, albeit at a low level, for firing-up is a time-consuming task."

"Minor repairs were carried out on shed, though for extensive work the engine would go to one of the major locomotive workshops. Several hours before an engine was due to be rostered, the fire would be made up, steam raised and it would wait, simmering." 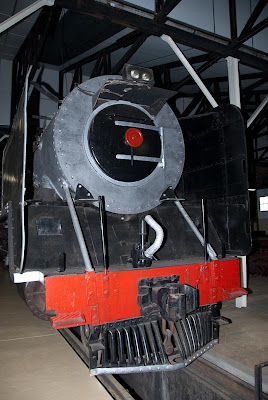 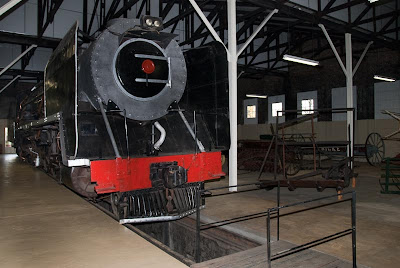 This engine was last serviced in the Germiston locomotive shed, and then came down to Worcester under her own steam, and then under her own power backed in into the Locomotive Shed to this position, before her boiler pressure was finally run down to zero. 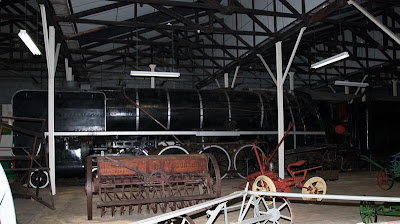 This big engine is a bit difficult to photograph in full in the limited space of the old shed. Her tender still has a full load of coal (not clear in this picture). 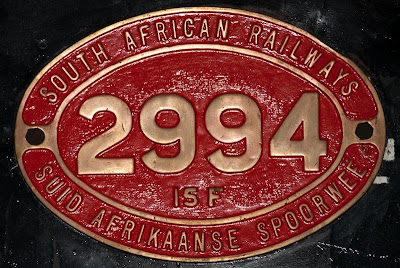 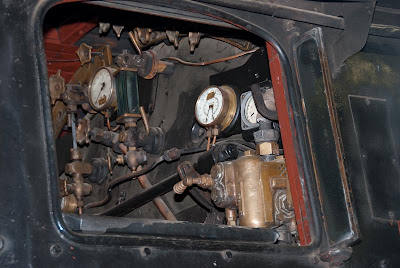 The complete cabin proves that the locomotive has been well protected from vandalism. 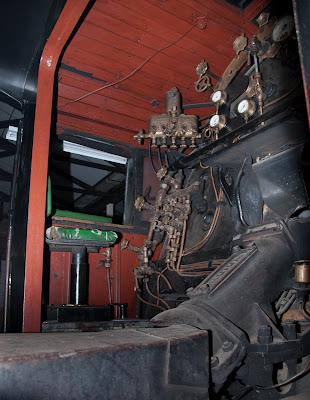 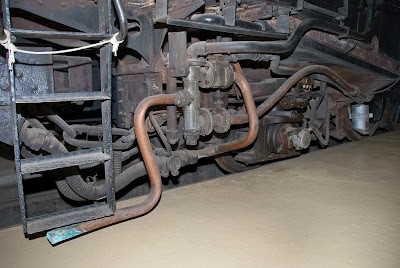 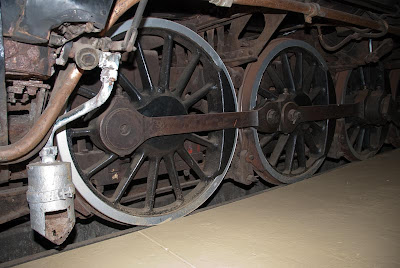 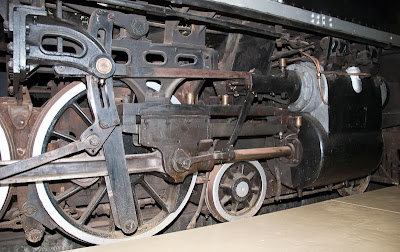 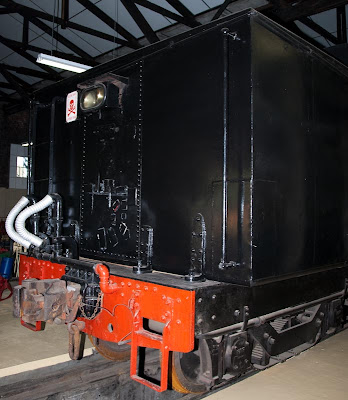 When the locomotive was parked in the shed, no one had a long term thought about the water in the tender. Finally. over years, the rust in the tender worked it's way through at the back of the tender. ( I guess this was a fairly regular occurrence with plinthed locomotives all over South Africa.) Some years ago, the museum had someone in to patch up the holes - this work is quite visible, but this looks much better than the real holes! 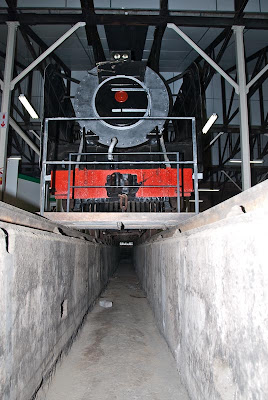 SAR Engine No. 2994 is parked over the work pit in the loco shed, just as she would have been if she came in for a real service. 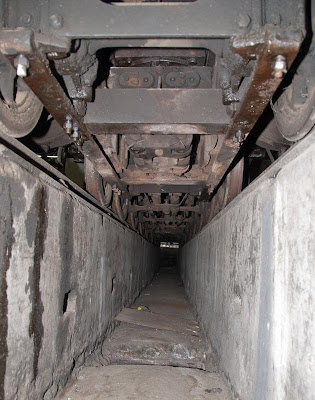 One can inspect (if you have the nerve!) the locomotive from underneath as work shep personnel would have done when servicing a locomotive. Here the 4 wheels of the front bogie is nearest to the camera. 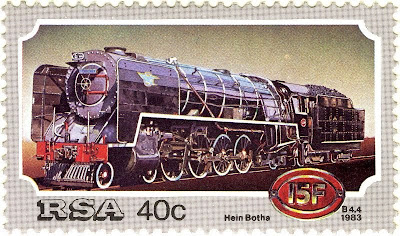 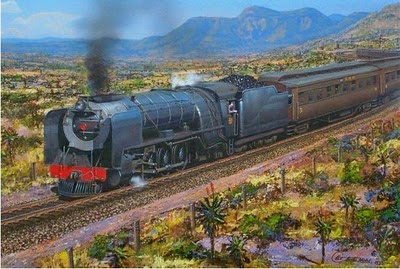 Image: © Patrick C. Höbel. A very fine painting, of a Class 15F at work, titled "Aloes and Steam", as published in the North British Locomotive Preservation Group Newsletter for January 2010. Permission to use this image here, was given in August 2010, by kind courtesy of the artist Pat. C. Höbel. Pat lives in South Africa, and likes to paint in the acrylic medium, and is interested in taking up commissions. Pat also sells prints of the originals. Currently he does not have much on the S.A.R., mostly overseas trains. He is about to start new paintings of the local steam scene, and will do subjects of famous name trains, like the original Orange Express. Last year he was commissioned to paint The Queen of Scots pullman for a person in Edinburgh. At the moment (August 2010), he is awaiting the go-ahead for two more train paintings from the U.K. One for the same gentleman in Edinburgh, & the other from someone in Cheshire. He also paints aircraft, airships, boats, landscapes, seascapes, wild life, spiritual themes etc. If you would like to see more of his work, Pat may by contacted at pat.art@telkomsa.net.

In his book "Steam Locomotives of the South African Railways" vol 2 (1910-1955) - D.F. Holland offers the following information about the SAR Class 15F :

"In 1938 further main-line locomotives were required and orders were placed for twenty-one, similar to the SAR Class 15E, but fitted with Walschaert's valve gear in place of the RC gear. Because of this modification they were classified SAR Class 15F. They were ordered from the Berliner Maschinenbau, who built Nos 2902 to 2908, works numbers 10820 to 10826, and Henschel & Sohn, Nos 2909-22, works numbers 23932-45."

"The boiler, which was of the standard class 3B type, was arranged for hand firing but provision was made for fitting mechanical stokers. A number of orders were placed at different times for these locomotives as may be seen from the table below, and they became the most numerous class for main-line working to see service on the SAR."

"In 1944 a modification was made to the brake gear of these locomotives, and they were fitted with vacuum brakes to work in conjunction with the train brakes in place of the more usual steam brakes. SAR drivers have always been reluctant to make use of steam brakes, for fear of skidding the engine wheels. The trigger on the steam brake attachment, for isolating the proportional device for admitting steam to the brake cylinder automatically on the application of the vacuum brake, was invariably wedged down with a wooden peg which was carried by the drivers, and this eliminated the steam brake entirely. This arrangement of fitting vacuum brakes to the locomotives became standard practice from 1944 onwards. It was thought to be a completely new departure for South Africa, but the two tandem compounds introduced by the Cape Government Railways in 1902-3, Nos 804 and 839, were both fitted with vacuum brakes to the engine wheels."

Below are copies of the pages of a reprint of an article titled '4-8-2 "15" Locomotives for the South African Railways' published in the Sept. 20, 1946 edition of "The Railway Gazette". 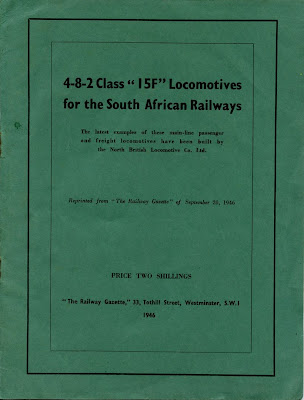 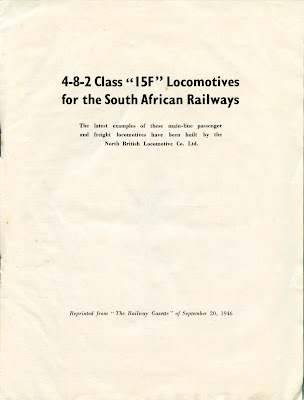 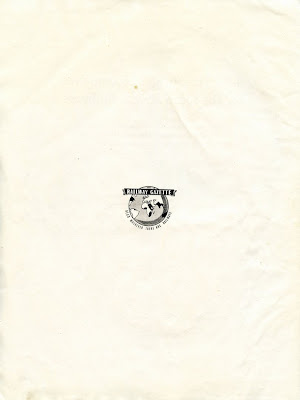 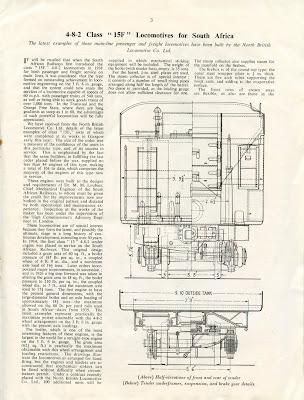 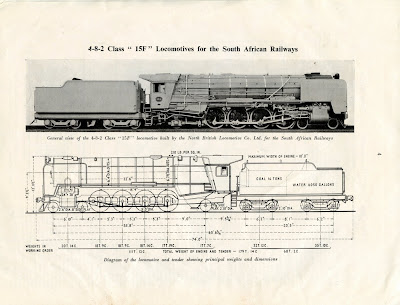 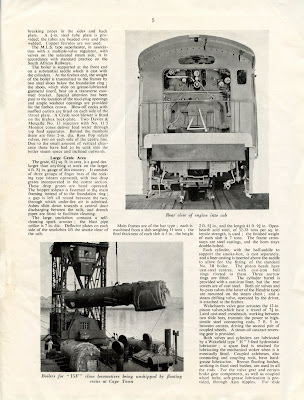 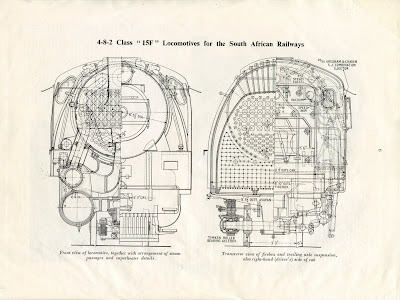 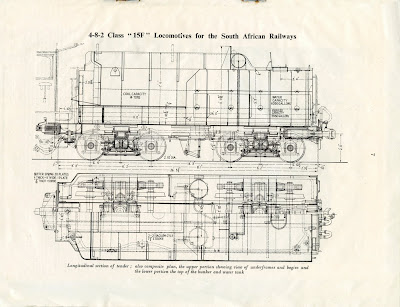 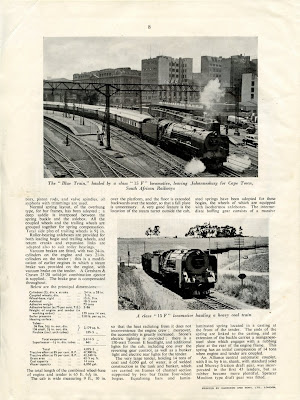 From the past: This same engine when it was still in steam. 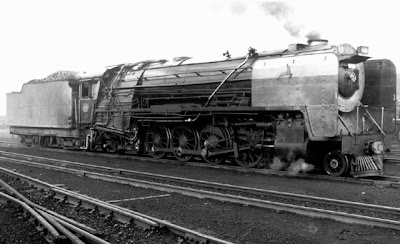 A Class 15F sister engine, SAR engine No 3007 found it way back to a Museum in Glasgow - it can be seen here.

Sources:
Return to first entry: Exterior of museum
Posted by Piet Conradie (for e-mail addr: see profile plse) at 9:26 AM