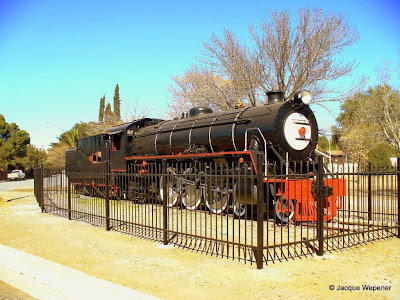 1 August 2012 Image courtesy of Jacque Wepener - rectangular (rust) holes have been left in the tender - the progress of this may be followed in many of the images below. 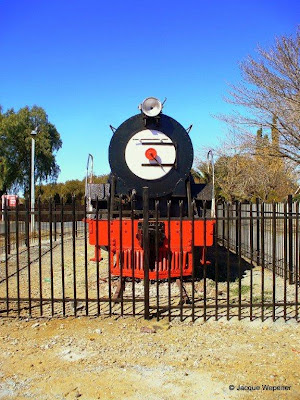 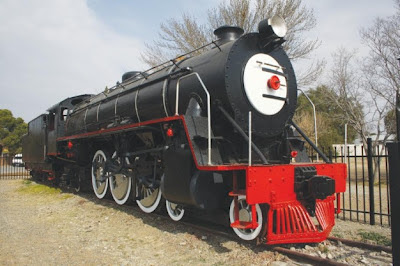 This image was published in VOLKSBLAD in August 2012. (holes in tender seems to be filled?)

VOLKSBLAD of 22 August 2012 reported that the locomotive had again been repainted after about a decade in the former red coat as provided by the Land Service Movement - see images below. This time the initiative was taken by the Outdoor School Knoppiesvlei located outside the town. The school received various donations from the community - the locomotive was sanded down, rust holes were repaired, and an undercoat was applied before two final layers of paint were given. Special consideration was given to restore the locomotive in its original plinth colours. 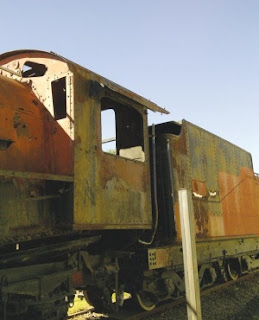 2012: Before repainted recently, the locomotive was this sorry sight. 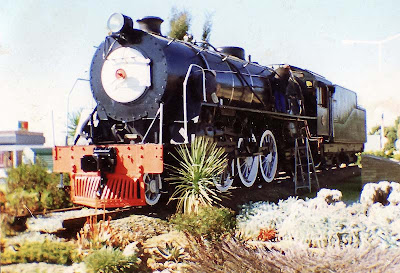 THEUNISSEN 1989: The locomotive shines! Photo kind courtesy of Jacque & John Wepener. This picture shows the locomotive on its original plinth, as a town guard and tourist attraction, at the northern entrance to the town of Theunissen.

This proud locomotive belongs the SAR Class 16DA, which often headed the likes of the Union Express and the Union Limited - both forerunners of the Blue Train. The locomotive worked fast passenger trains between Braamfontein and Kimberley and also between Braamfontein and Kroonstad. Locally it is said that this locomotive was retired after having done 2 800 000 kilometres, and that it holds a record for once running the distance of 185km between Harrismith and Warrenton without taking on water. The water tender's capacity is 27 276 liters.

All the class 16DA's were withdrawn in 1973. This locomotive no 850 was brought to Theunissen in 1976, and plinthed at the northern entrance to the town. 18 years later - in spite of meetings and protest by locals - in 1994 - the locomotive was moved to a less prominent site in town - because it was said to be spoiling the view in front of a certain business.

Since this move, the locomotive was damaged quite a bit and stripped of many fittings.

Philip Braithwaite posted this post-1994 image in the Atlantic Rail "Return to Steam" Class 16DA No.879 Appeal on facebook. 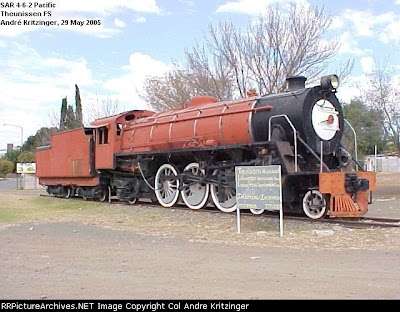 André noted: She now serves as town guard at Theunissen. On my previous visits there, she was still black, but when I took this picture, the local high school had decided to do some maintenance on her, hence the red coat, somewhat faded here already, and the sign.

In April 1999, VOLKSBLAD reported that the local school's members of the Land Service Movement had started a fundraising project to repaint the locomotive. The fundsraising was expected to run for three years. This project resulted in the locomotive being painted red like shown in these images. 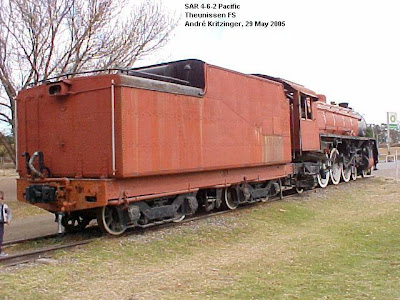 The red paint job must have happened in 2003 or before, as it's quite visible in the Google Earth view. More schools should adopt these forgotten engines ... it would do a lot for their engine and the town's image!!! 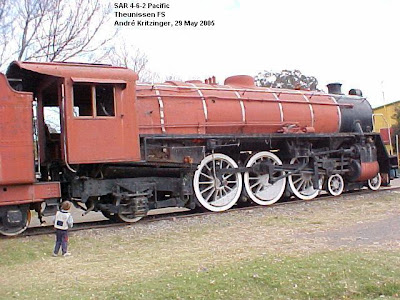 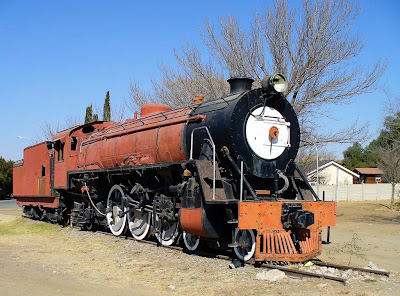 A sister engine No 878 is plinthed at the Transwerk Workshops in Bloemfontein. 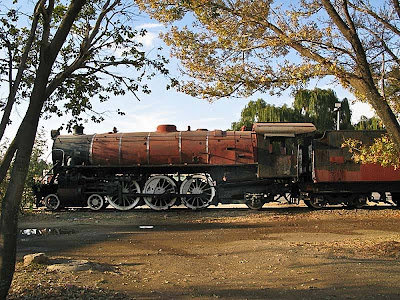 This photo and the one below were taken in June 2010 by Paul Ash - these photos appeared on the web pages (here and here) of the "Times Explorer. Paul noted: "The locomotive was a gift to the town from the South African Railways back in the 1970s. The SAR gave a lot of its surplus locomotives away, as reminders of the one thing that had once put these towns on the map – the railway. The plan was that each municipality would get the locomotive for free, including the installation on a plinth – as long as it was kept clean, and painted. These engines arrived with all their brass fittings, copper piping and heavy brass number plates intact. Today, most have been stripped by scrap metal thieves, and the hulks vandalised, and used as toilets. Theunissen’s – a class 16DA, built by the Baldwin Locomotive Company in 1928 – is rusted through, and its red paint job is long faded. Kind of like the town itself." 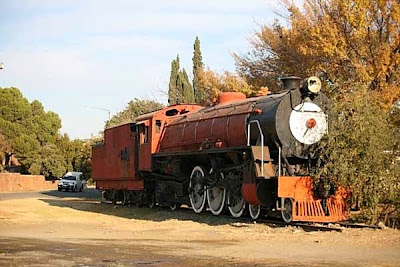 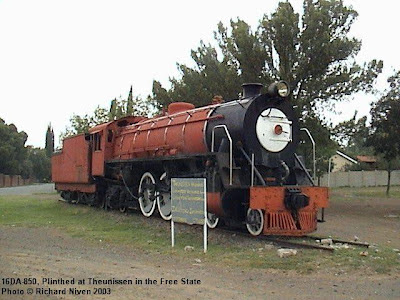 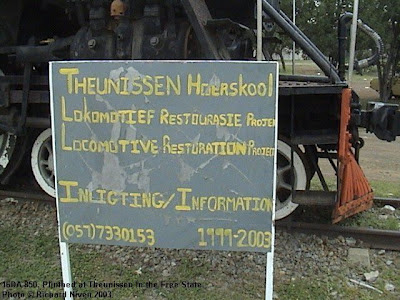 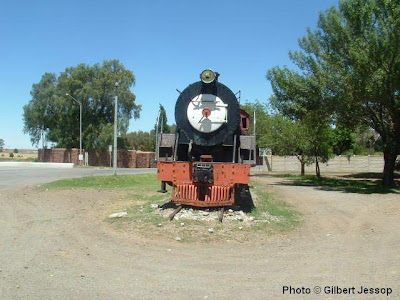 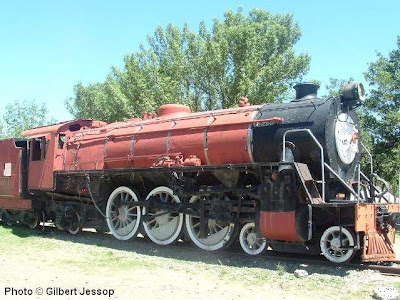 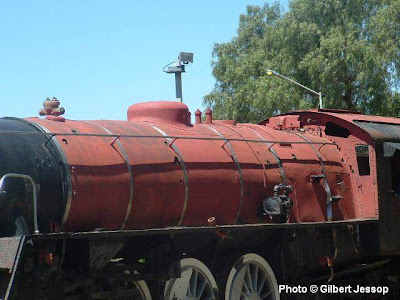 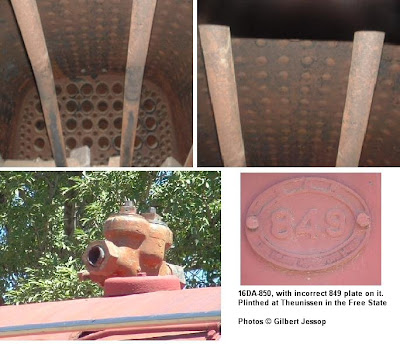 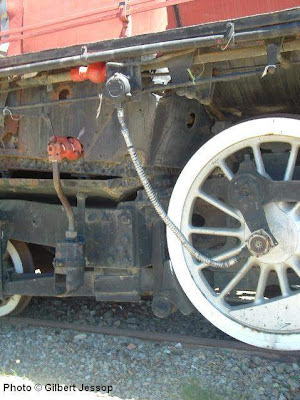 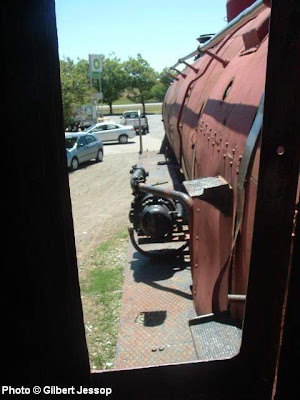 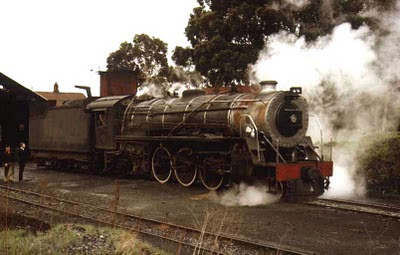 This picture shows sister engine 16DA 844 which retired into industrial service. Here it was on test from Dunns at Witbank Colliery on 16.10.1972: photo courtesy of Roger Griffiths.

From the Past: A sister engine No 870 when still in steam. 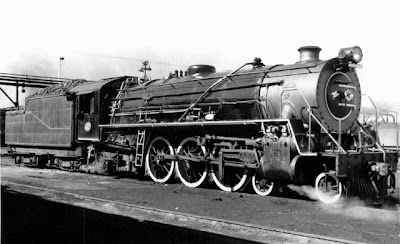 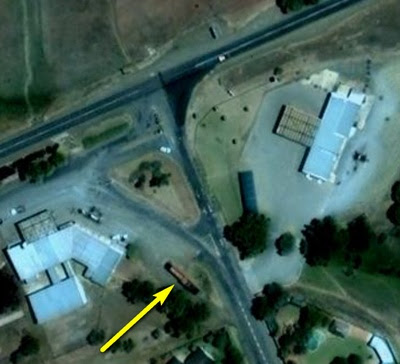 The town of Theunissen has a SAR Class 16DA N0. 850 steam locomotive on display, and this 2003 view of Google Earth shows the position of the locomotive. 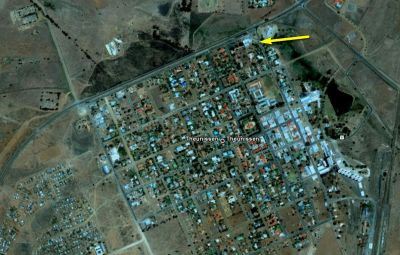