.
All the colour photos in this entry are courtesy the photographer Harry Van der Schyff who took these pictures on 18 July 2009 - the photos are published here with the kind permission of the Sasol Synfuels Communication Department. 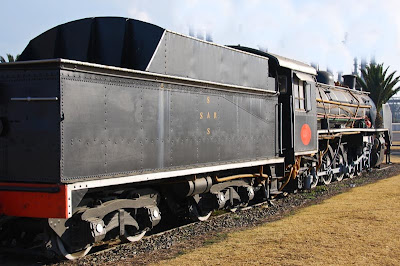 This locomotive is an ex-SAR Class 19B which used SAR engine No 1413. It is now plinthed at the main entrance to the Sasol Synfuels East coal-to-oil plant [formerly known as " Sasol 3"] at Secunda. The locomotive was built new for the SAR in 1930 as works number 9839 by Berliner Maschinenbau in Berlin, Germany. 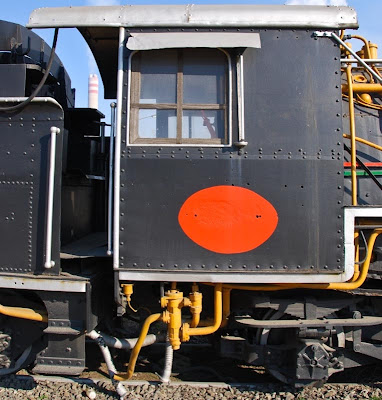 The Class 19B could be discerned by the cab, which sloped slightly inboard above the waist rail. 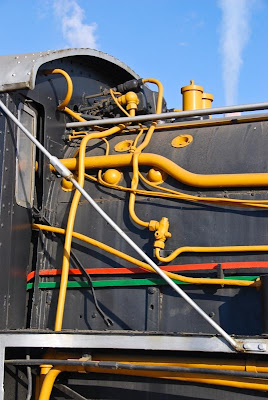 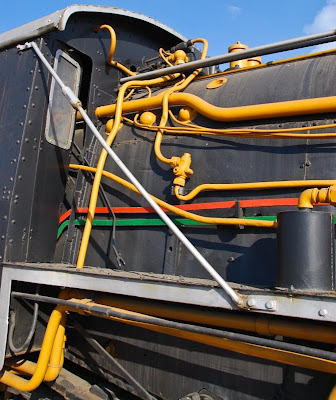 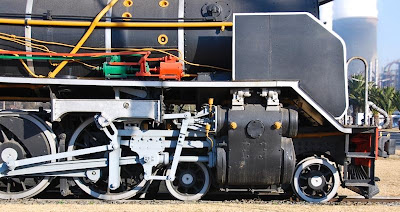 Technically, the Class 19B differed from Class 19 in having a slightly longer leading bogie wheelbase, due to the original's wheels fouling the cylinder covers on sharp curves.

Besides working around Cape Town and between Kimberley and Vryburg, much of their lives were spent on the Graaff Reinet-Rosmead section. The 19B/19BR version were used almost exclusively over the Lootsberg Pass, between Rosmead and Graaff Reinet, until replaced by 19D's. One or two were stationed at Sydenham, and these sometimes appeared on the Grahamstown branch. They were all withdrawn by 1977. 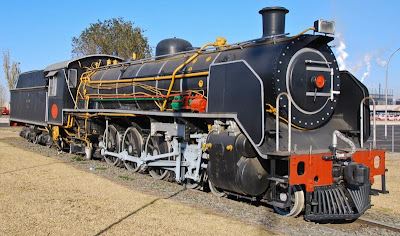 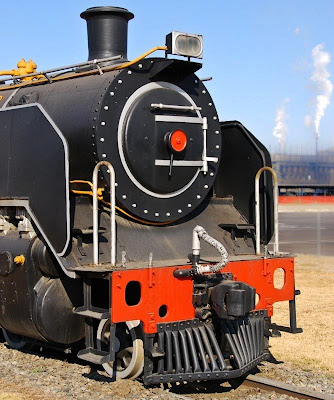 SAR Class 19B no 1413 was sold to the Fluor company for use at the Sasol oil from coal plants. 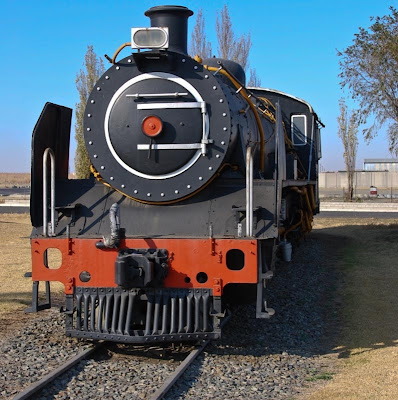 The then owner of this locomotive - Fluor SA, is a wholly-owned subsidiary of Fluor Corporation, a Fortune 500 company listed on the New York Stock Exchange. Fluor provides services on a global basis in the fields of engineering, procurement, construction, operations, maintenance and project management and has been present in South Africa for over 45 years. Some of Fluor’s most notable projects include the construction of the Caltex refinery, Natref, Sasol II and III. 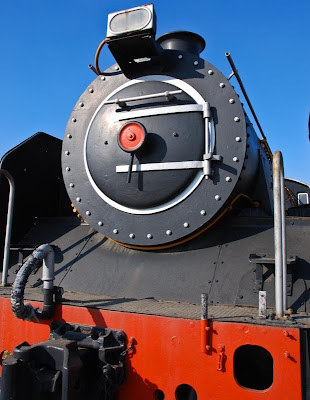 The Sasol loco's worked from the coal to oil plant on a 10 km branch to the SAR at Trichardt on the Springs-Bethal line.

ex-SAR Class 19B engine No 1413 is plinthed at the entrance to the Main Offices of the Sasol Synfuels East coal-to-oil plant at Secunda. The locomotive is in a beautiful condition and is cosmetically well cared for. 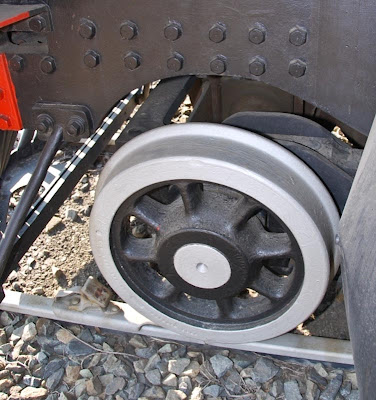 The Class 19 series were designed as 4-8-2 branch-line locomotives. Class 19 contains only 4 locomotives. In 1930 a further 14 engines (SAR no's 1401-1414) were built to the Class 19 design. Because the wheel base of the front bogie was increased to improve clearance with the cylinders and bogie wheels, it was decided to classify them as Class 19B. 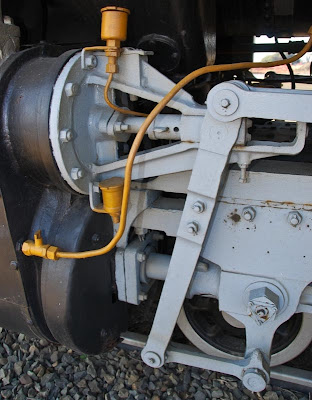 To match the concept of a bar-frame 4-8-2 (classes 15CA and 15CB) for heavy maine line duties, a lighter version was developed for secondary services over light track of 60lb/yd, the basic design being developed steadily over the years to become the standard type for secondary and branch lines. There were four main variants plus several sub-varieties, making quite a complex group of essentially similar locomotives.

The first four Class 19 locomotive no's 1366-1369 to the design of Col. F.R. Collins were delivered by Berliner Maschinenbau in 1928 and placed in service on the Kimberley-Vryburg line. They were superheated with bar frames and Walschaert's valve gear and proved extremely successful, having spent most of their working lives at Empangeni on the Natal north coast. 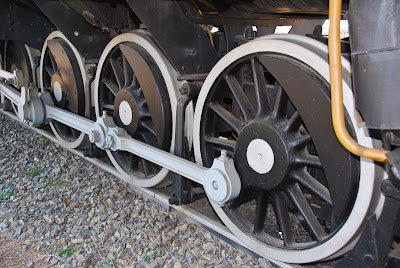 The original Class 19 amounted to only 4 locomotives, no doubt considered as a pilot project, and after purchasing the smaller 19A version, a slightly modified 19B variant appeared. 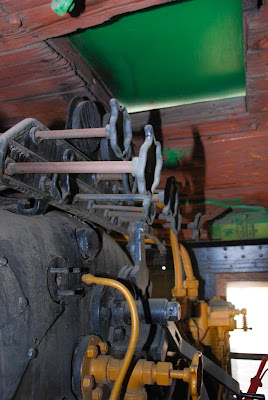 Technically, the Class 19B differed from Class 19 in having a slightly longer leading bogie wheelbase, due to the original's wheels fouling the cylinder covers on sharp curves. The Class 19B could be discerned by the cab, which sloped slightly inboard above the waist rail. 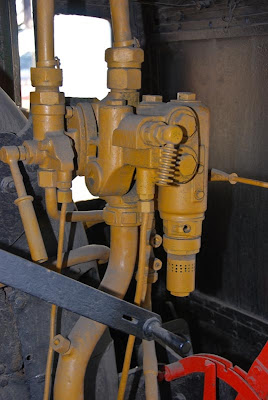 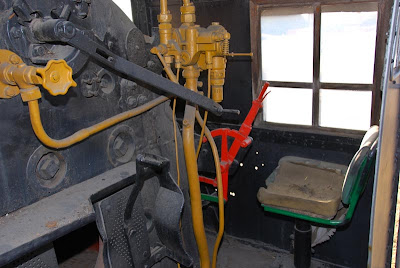 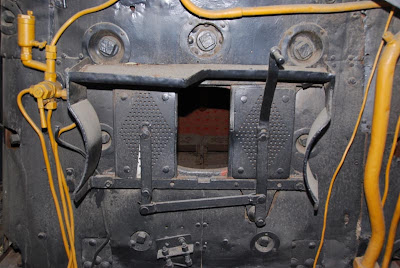 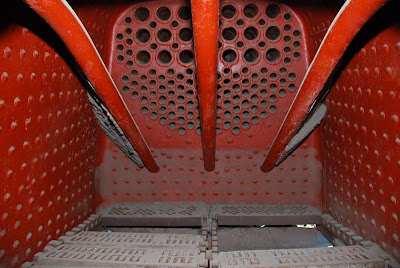 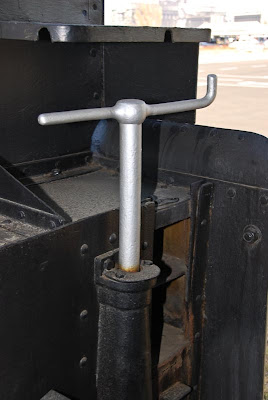 The mechanical brake on the coal tender. 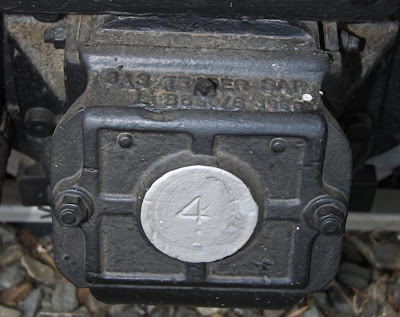 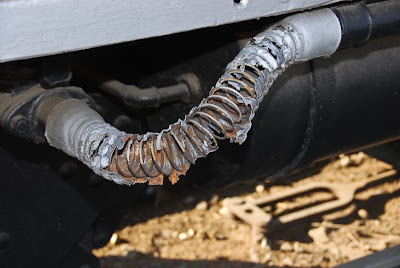 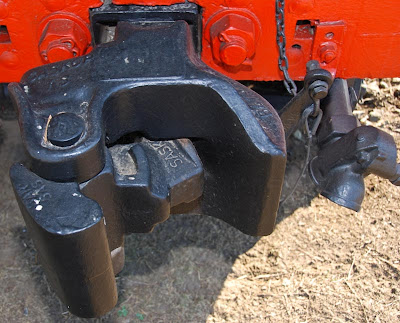 Below are two pictures of sister locomotives when still in steam. 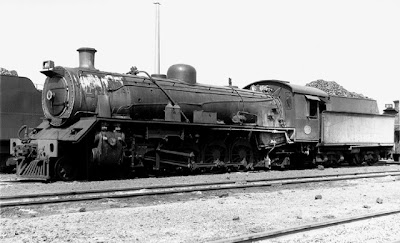 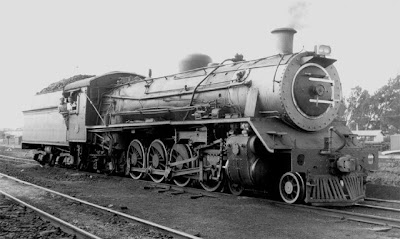 The Google Earth photos below show the position of the plinthed locomotive. 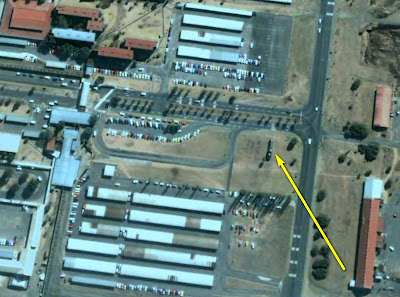 It would appear that the locomotive is accessible from the public parking lot before the security gate. 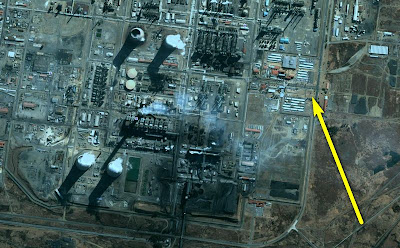