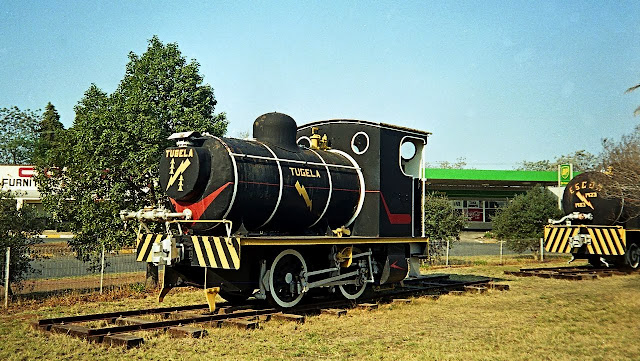 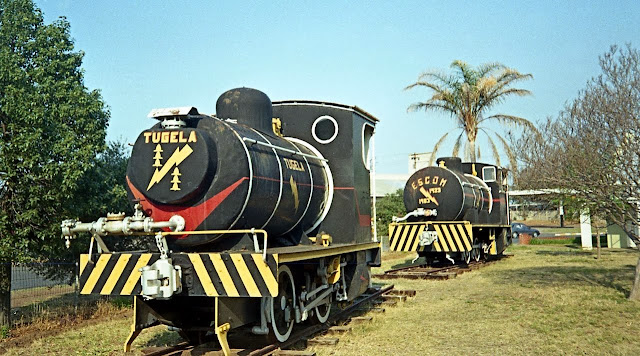 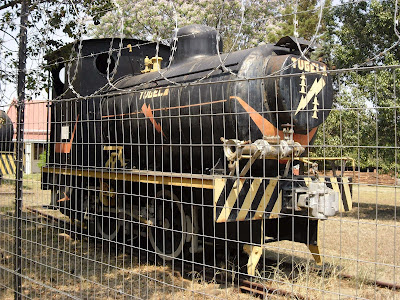 This image taken by Jacobus Marais on 28 Sept 2011. It was posted to the Atlantic Rail fb page. 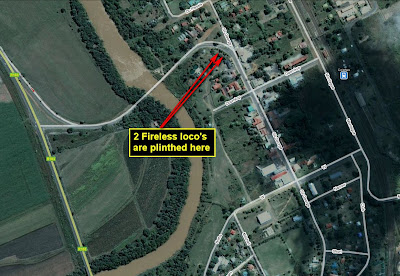 This March 2008 Google Earth Map shows the location of two fireless steam locomotives in Colenso. Click on Map to enlarge.

NOTE: THE FOLLOWING INFORMATION HAS BEEN COPIED FROM THE ESKOM MUSEUM HERITAGE PAGE AND MERELY SERVES TO BACKUP THE INFORMATION IN CASE IT DISAPPEARS:
+++++++++ 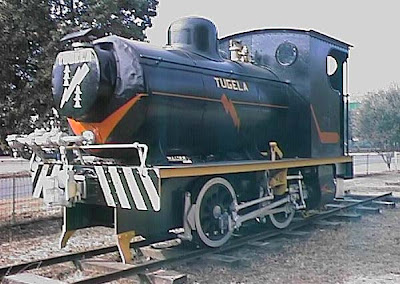 TUGELA is a fireless-type steam locomotive. This means that it has no boiler to generate steam. Instead, it has a large insulated pressure vessel holding steam under pressure. These locomotives were suitable for short trips in areas where large steam generating plants were available to recharge the pressure vessel.
Trains hauling coal were brought by the railways to points near the power stations. Each power station was then responsible for the haulage of the coal trucks to its coal staiths.
ESKOM, formerly known as the Electricity Supply Commission (ESCOM) was the second largest user of fireless locomotives in South Africa. The Iron and Steel Corporation (ISCOR) was the largest user of this type of locomotive. ESKOM employed fireless locomotives at its power stations for almost sixty years.
TUGELA was bought from R W Hawthorne, Leslie & Company of the United Kingdom in 1935. It saw service at Colenso power station until the station closed in 1984. It is rather appropriate that the locomotive was named after the river on whose banks the station was built and from which the station obtained its water. In 2000, it was still on display at the municipal offices at Colenso, KwaZulu/Natal.
TECHNICAL DESCRIPTION
Type: Fireless
Work’s No: 3858
Wheel Formation: 0-4-0
Tractive Force (lbs): 11950
Year of manufacture: 1935
ACKNOWLEDGEMENT
This information on TUGELA comes from research material compiled by Mr. Rick Searle, a retired ESKOM employee.
Posted by Piet Conradie (for e-mail addr: see profile plse) at 11:15 AM