NOTE: THE FOLLOWING INFORMATION HAS BEEN COPIED FROM THE ESKOM MUSEUM HERTITAGE PAGE AND MERELY SERVES TO BACKUP THE INFORMATION IN CASE IT DISAPPEARS:
+++++++++ 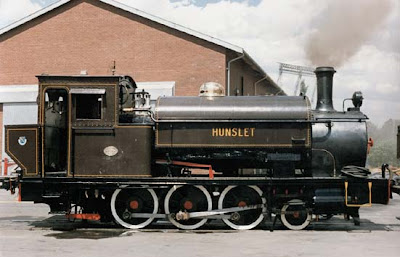 HUNSLET was built by the Hunslet Engineering Company, Leeds, England in 1902. It is not known who ordered the locomotive. However, it is known that she was shipped from the factory to Durban for Roger Jenkins, a firm of mechanical and electrical engineers acting as agents for Hunslet. The Victoria Falls and Transvaal Power Company Limited (VFP) bought Hunslet in 1912. It is not known from whom the VFP bought Hunslet.

Originally, Hunslet had coal boxes on each side of the cab. But as these proved to be inadequate, a new coal-bunker was constructed at the rear of the cab in 1946. The old coal boxes became tool-boxes. In summer, as the water in Hunslet’s saddle tank became heated, it caused the two injectors to dribble. This indicated that the water did not condense the steam quickly enough. No such problem was experienced in winter.

Hunslet is on permanent loan from ESKOM to the South African National Railway And Steam Museum also known as SANRASM in Krugersdorp. A ride on this steam locomotive is still possible. Enthusiastic volunteers operate the museum. Their efforts ensure that Hunslet "steams" for the public approximately twice each year.

Posted by Piet Conradie (for e-mail addr: see profile plse) at 11:16 AM