On 23 August 2009 we visited the old narrow gauge station at Humewood Road in Port Elizabeth. We knew that this was a locomotive graveyard, and that the place is patiently waiting for the last scene when the final scrappers and wreckers arrive.

The locomotives at this site are generally described as "abandoned". However, the Garratt NGG 13 no. 79 in the shed does not fall in this category and still appears in lists.

So I rather played with the camera and experimented to see what sort of images I could take away. So this is just a record of what Humewood Road looked like on the day of our visit.

"Humewood Road. The site is being cleared, but certain of the heritage items are being moved to the nearby diesel depot. Effectively Humewood Road is no more, and the buildings are going to be demolished".

Please look at this web page created by Ralph Timmermann about his visit to Humewood Road on 4 November 2006 - there you may find some leads to my pictures .... I have identified a few items by using Ralph's page as source.

The remains of two locomotives are parked under the single line shed. The boiler on this end belongs to an unidentified no NG15 locomotive.

On the other end of the unidentified "boiler" loco, is this Garratt NGG 13 no. 79. [Hanomag 10631/1928]. I don't think this locomotive is considered "abandoned" yet, even though it might appear so!

Ralph Timmermann noted: " Finally, I found a diesel loco that did not carry any sign of origin and identity. It turned out to be the ex Eastern Province Cement Co. 6wDM (Hunslet Taylor 6357/1964), which was purchased with the two Funkeys by the Ffestiniog Railway after Spoornet had taken over operation of the branch from Chelsea to the factory around 1986. As it was not needed by the FR it remained in PE and probably was eventually donated to the Apple Express Society."

"The Row" From left to right:

Ralph Timmermann noted about the cab-less loco: "Assuming that it's not #144, it may be NG15 148. Anyone care do agree or disagree?

photo: Elna Conradie
.... the fore and aft tanks (of NGG16 No.154) are perched on a nearby flatcar. As there was only one NGG16 on site, it must be this one, also standing in The Row"

NGG16 No.154 - Ralph Timmermann noted: " There is also the remains of NGG16 No.154 - with boiler, but no cab and the fore and aft tanks are perched on a nearby flatcar.As there was only one NGG16 on site, it must be this one, also standing in The Row" 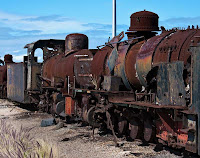