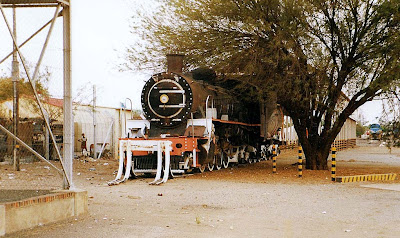 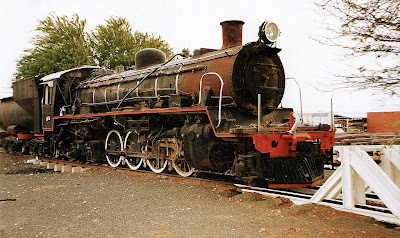 Two SAR class 24 engines, no's 3611 & 3612, are spending their days stored in a railway shed at Keetmanshoop. From the South West African Working Table Book dated Nov. 26, 1956 (please see information at the bottom of this entry), it is clear that both these locomotives were working in SWA in 1956.
The Class 24 locomotives, built in 1948, were specially designed for the light tracks in South West Africa (now Namibia). In 1960/1, when the SWA system was dieselised, the Class 24 locomotives were all transferred back to South Africa and deployed on suitable branch lines.

SAR no's 3611 & 3612, however, were in later years handed over, as a gift, to the National Transport Corporation (in Namibia) [later renamed to Trans Namib Ltd]. 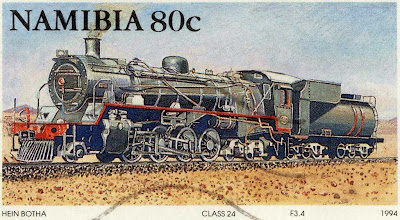 On 5 August 1994, the Class 24 appeared as one of a special set of 4 stamps commemorating "TRAINS" in Namibia.

My brother Louis Conradie, who lives in Windhoek, on my request, kindly took these pictures for me on 2 September 2009. His wife Therése had to patiently wait in the car, a gesture which I greatly appreciate!

It is assumed that one of these locomotives last headed the "Diamond Train", to Lüderitz, in July 1991. See the Afrikaans newspaper report at the bottom of this entry. 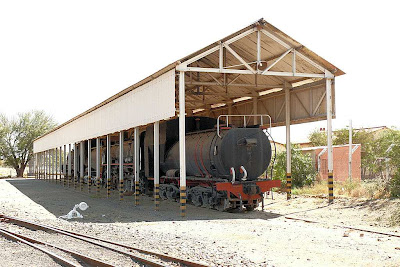 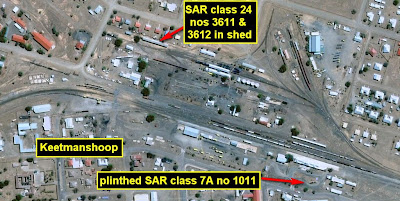 This map shows where the two engines are now (2010) stored in a shed. (Click on image to enlarge) On this google earth view the two engines are still positioned outside of the shed - one hidden underneath a large tree near the shed, but the white cab of the 2nd loco to the left is clearly visible from the sky. The October 2003 photos at the top of this blog entry show the engines as per this google earth view..

The locomotives may not always have been stored in the shed. In this Google Earth (2005?) view, a locomotive is visible to the west of the shed, on an uncovered track, ending at the dirt road along the fence. One of the locomotives also has evidence of having stood under a tree shedding leaves on it for many years.

Louis was on site readily granted permission to view the locomotives.

The staff on site said that some items belonging to these locomotives, like the road numbers plates, were stored at the Railway Museum in Windhoek. Apparently there had been a recommendation to the authorities that these two locomotives be scrapped. This has yet to be confirmed. 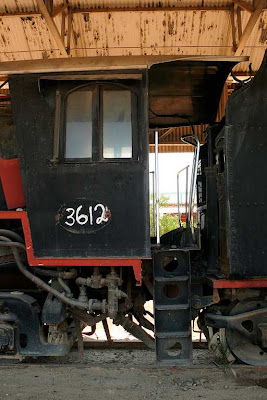 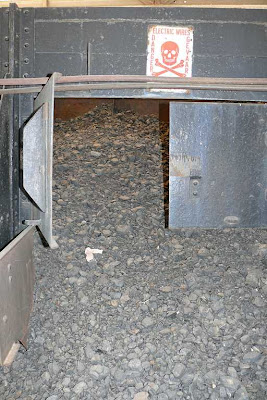 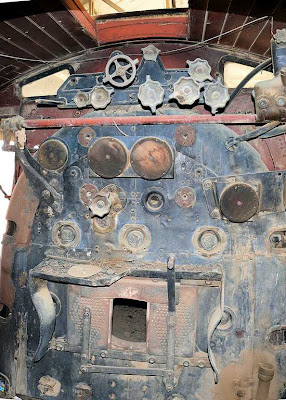 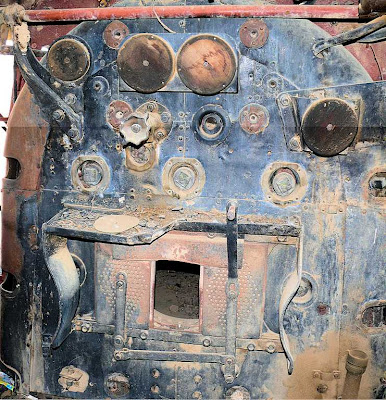 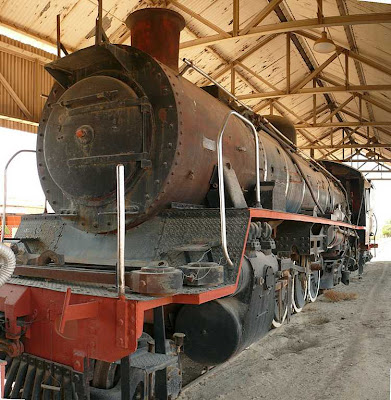 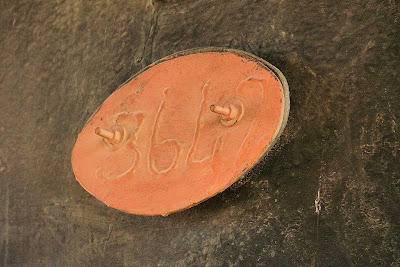 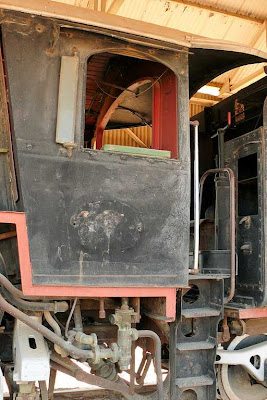 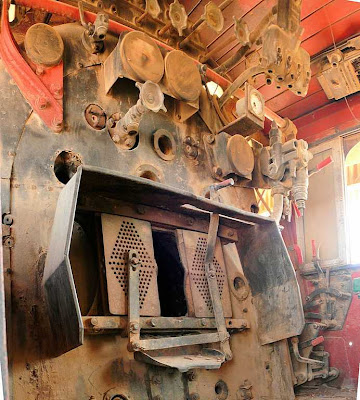 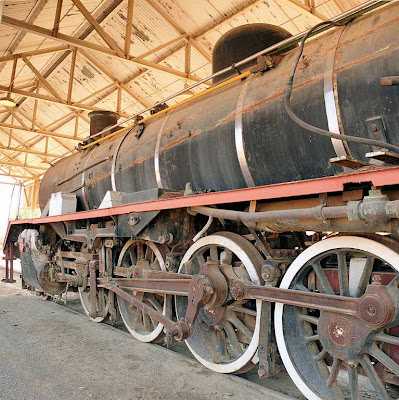 As is usual elsewhere, these locomotives have also been stripped of many essential parts. 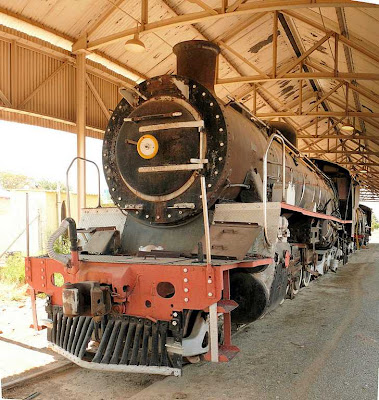 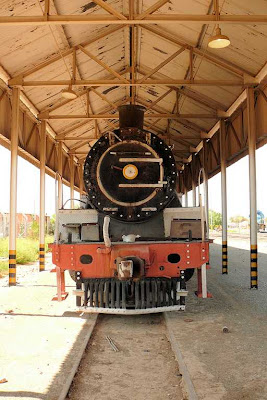 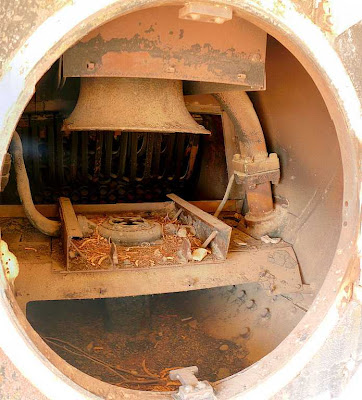 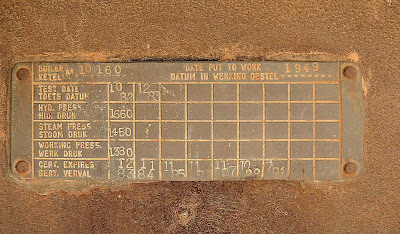 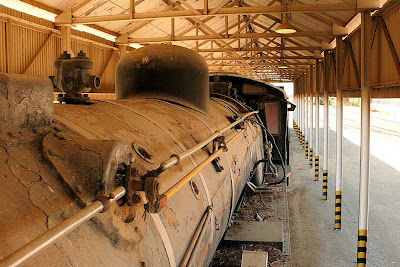 This locomotive must have spend quite some time under a tree for many years, and this caused a lot of rust damage, before the locomotive was moved into this shed. 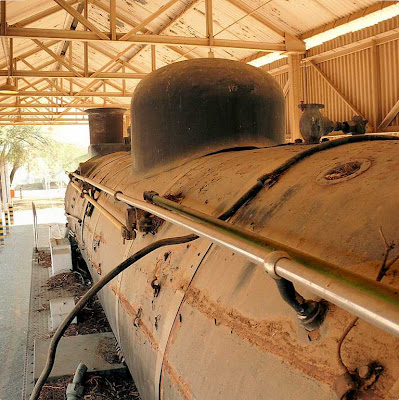 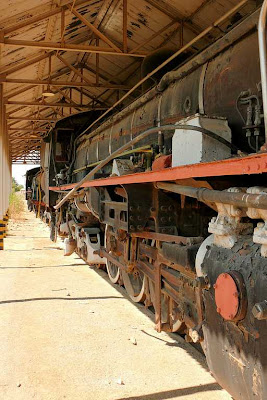 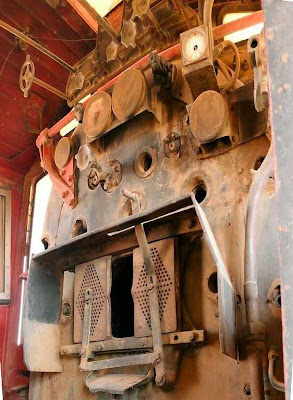 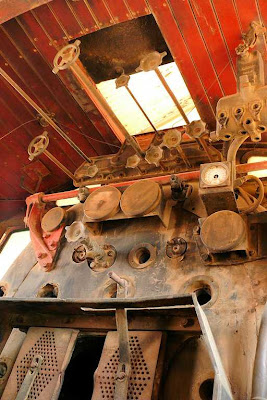 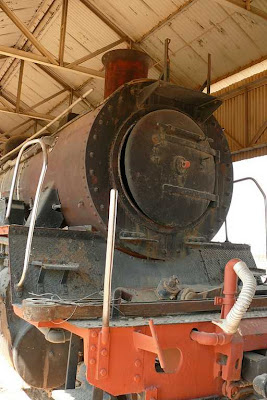 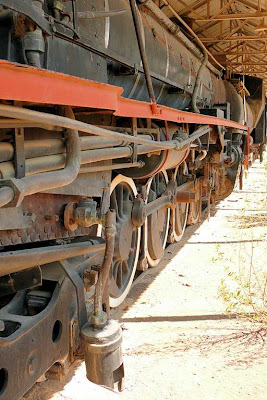 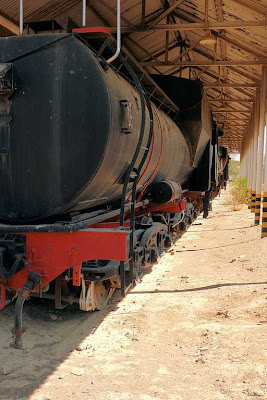 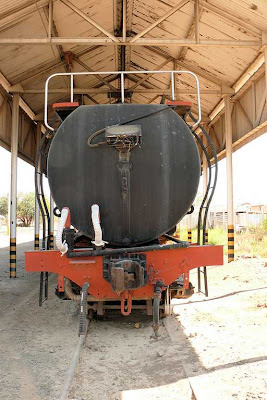 The Class 24 is a branch-line locomotive, designed by by Dr. M.M. Loubscher, former chief engineer of the SAR, introduced in 1948 for operation on track as light as 40 lb, much of which was laid in SWA. They were intended to displace the old Class 6, 7 and 8 locomotives still in service there.

The 100 locomotives of this class were constructed by the North British Locomotive Co. One of these, No 3675, was named 'Bartholomew Diaz' to commemorate the fact that she was the 2 000th locomotive built by the company (and its predecessors) for South Africa.

The locomotives have a one-piece steel main frame cast integrally with the cylinders - the first application of this technique on the SAR. They were fitted with the standard No 1 boiler (similar to those fitted, for example, to classes 5 and 10B) and Walschaert's valve gear. The tender is of the 'Vanderbilt' or 'barrel' type with cylindrical water tank and 'Buckeye' bogies.

Besides SWA, they were also placed in service on various selected branches in South Africa. With the dieselisation of SWA, this class was sent to join those already in service here, particularly in the Cape and Transvaal and a few in the Free State.

It appears they saw very little service in Natal.

By 1985 this class was being withdrawn. 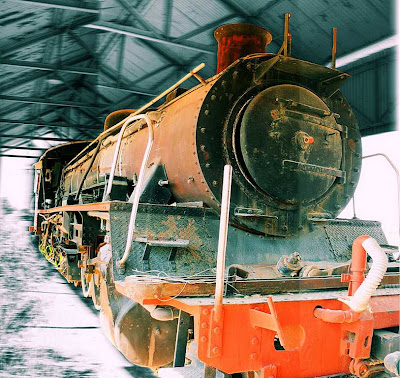 A somewhat artistic rendering by Louis! 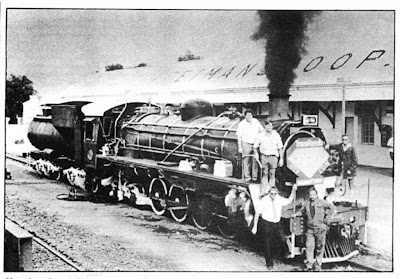 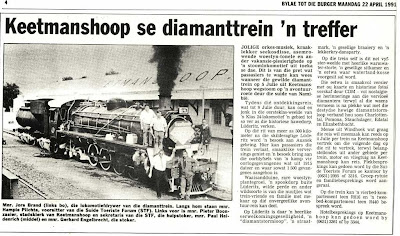 Click on image to read the newspaper article in Afrikaans.

Some years ago Stuart Grossert had the good fortune to be given a copy of the SWA WTB of November 26, 1956. Below are some details and numbers of locos listed in this book as working in SWA (presently named Namibia) at that time: