photo: Elna Conradie: The plinthed Class 7 no 982 with the old Aliwal North station buildings, made of sandstone, in the background.

We visited the old Station area of Aliwal North late on the afternoon of Friday, 28 August 2009. The buildings appeared to be used by private businesses, and the area had already been locked-up, so that we could only view the locomotive from some distance. 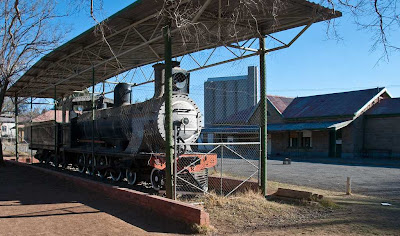 The locomotive is under a roof, and itself has been fenced-in in a kind of chicken coop, however, as usual, this had been long since broken into, and the usual things have been removed to be banked with scrap metal dealers. 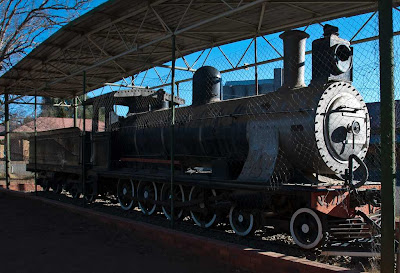 A closer view shows the less often seen tender type behind the locomotive. 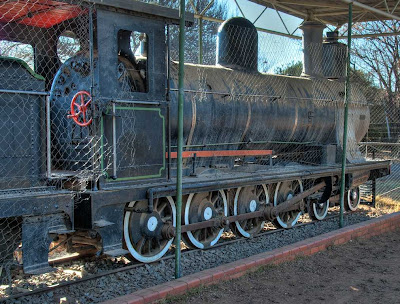 All the locomotives in this series originally used saturated steam, had plate frames and Stephenson link motion.

Specifications for the SAR Class 7 are here. 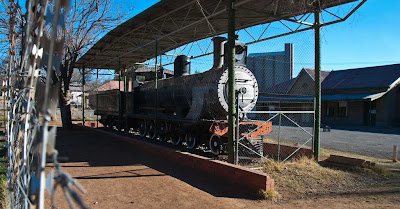 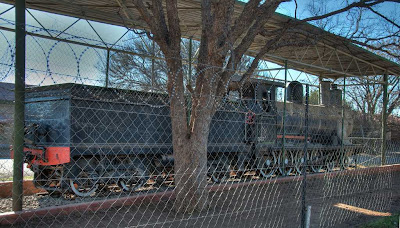 Dusty Durrant, author of at least 11 books, emigrated in 1967 to South Africa, to live and work near working steam locomotives. As a photographer his years in South Africa was the most rewarding. Sadly Dusty passed away in 1999. In 1989 he noted in Twilight of South African Steam of the Cape 7th Class: They were the Southern Afican "pioneer" locomotives, light enough to run anywhere. The Cape 7th series comprised the low-wheel 4-8-0's, with plate frames, possibly conceived as a freight version of the 6th class 4-6-0, but truly taking the rôle of pioneer power, being highly suitable for rough pioneer tracks. In various forms they were supplied to much of Africa, for example Rhodesia, Angola, Congo, in pure form, and developed with superheaters and piston valves, to other countries. Their design stemmed from the successful application of eight-coupled power, in the shape of 4-8-2T, in Natal, and was virtually a 'tenderised' Natal tank design. 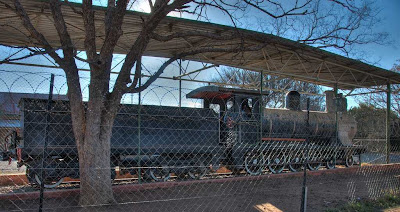 Al last view of the engine and tender .... 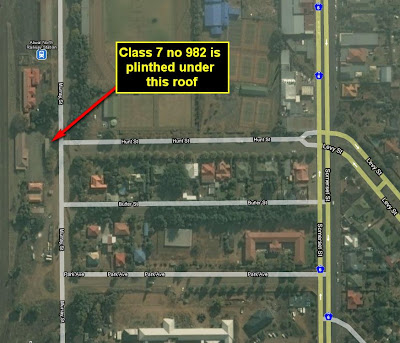 Click on image for directions to the plinthed locomotive.