Around 1970, the SAR Class H2 engine no 314 was plinthed on the platform at the Estcourt station. It was removed again in later years, and stored at the Natal Railway Museum at Hilton, and latest word (2009), was that there were plans to move the engine to the Masons Hill site, which falls under the Umgeni Steam Railway.
On 12 Feb 2010 Vaughan Mostert wrote to the sar-L group:

"Others will give you more technical detail than this, but few of them will be sitting typing this with tears running down their cheeks. It was H2 no 314. It was the shed pilot at Greyville and I would park my bike and sit for hours on Argyle Road bridge watching the comings and goings of locos. One of 314s tasks was to push coal up the incline. It would set back under the bridge and then come hammering through - on a vicious reverse "s" which only straightened out at the foot of the bank. This required skill on the part of the driver, especially in wet weather. Too much speed and the whole lot could go overboard into the Somtseu Road compound. Too little speed and - well, you just had to try again! When it went in for servicing, 227 would be the stand-in. I loved that little engine. I'm not even sure if I want to know its fate." 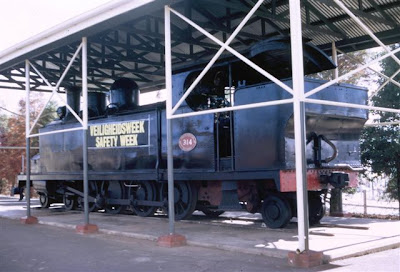 This engine, SAR no 314, was built in 1903 by Dübs & Co. of Glasgow, in Scotland, as their works number 4324, and started its life as NGR engine no 239. It was originally built as a long wheelbase 4-10-2T "Reid Ten Wheeler", but in later years, when under SAR administration, converted to a 4-8-2T arrangement, to make it more suitable for branch line and shunting duties.

"I am very interested in the locomotive that was plinthed at Estcourt Station, and I believe you are going to write an article shortly. I had just arrived in South Africa with my parents in 1969 after emigrating from England. We settled in Estcourt in about April of 1969. My father and myself were keen steam enthusiasts having been present at the demise of steam in the UK. We spent many hours at the steam sheds in Estcourt chatting to drivers & foremen, when one day a lonely tank loco was shunted into the yard and left in a siding for a few months. This was the engine to be plinthed on the station platform in 1969 , an H2 no 314, I believe." 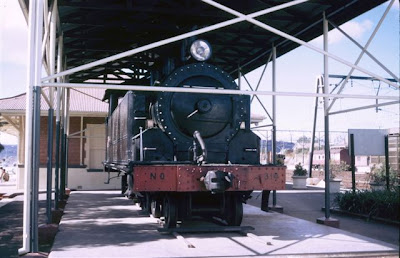 "It was a most interesting operation getting the loco off the tracks and onto the plinth using hydraulic jacks with a central controller and shifting the weight inch by inch. At one stage one of the jacks started to sink into the tar surface of the platform causing quite a panic."

"We left Estcourt a few years later for Johannesburg. I passed through the town about 2 years back and saw the plinth now empty & forlorn and was of course wondering where she has gone?. Could you possibly shed some light on the mystery for me Piet ,as well as any history you might have. I believe that she might be at the Hilton Railway Museum in KZN if so what of her future." 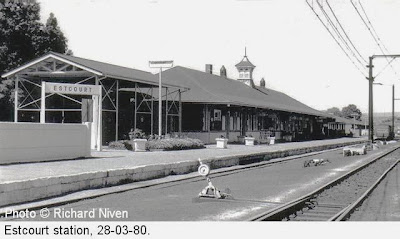 General 1980 scene of the station at Estcourt. The roofed plinthed H2 is located towards the left of the picture.

28-03-1980 photo provided by Richard Niven. Note that the engine had already lost its headlight by that time. Also a change to the coupler. 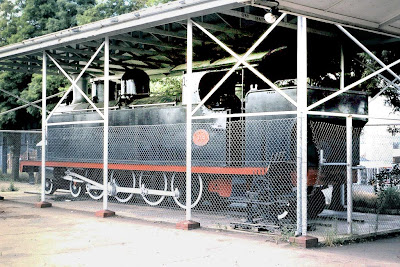 Feb 1994: The H2 was fenced in, and had a spotlight on it, but alas of little help - the fence was merely an eyesore. Photo provided in 2010 by kind courtesy of Ken Livermore, Hon. Secretary of the NBL Preservation Group.

4-8-2T
Originally these locos (when still SAR Class H) had 10 driving wheels; when later relegated to shunting work, these "Reid ten-wheelers" were prone to derailment in many goods yards. Accordingly, they were converted between 1910 and 1922, to a 4-8-2T configuration by simply removing the trailing coupled wheel, and closing off the frame opening, to become SAR class H2.

This class was used extensively for shunting in many parts of the country. The last ones to be in service remained on the Bluff (Durban harbour), until 1977, because of their light axle loading.
The problems of designing a tank engine, to haul at least one-and-a-half times that of the 'Dubs A' (SAR Class A), on the Natal main line, led G.W. Reid, locomotive superintendent, to the 4-10-2T wheel arrangement. In order to negotiate sharp curves, both the front and rear driving wheels were flange-less. They used saturated steam, and the 'D' valves were controlled by the Allan link motion. Between 1899 and 1903, 101 engines were built for the NGR (Natal Government Railways) by Dubs and Co, and later the North British Locomotive Co.
Known on the NGR (Natal Government Railways) as the 'Reid ten-wheelers' they were employed extensively on the lower section of the Natal main line. Even after more powerful locomotives arrived, they continued to be used on this section, while some were sent to De Doorns, to do banking duties in the Hex River Pass. When acquired by the SAR, they became the Class H, until conversion to 4-8-2T (see Class H2 #330 as shown earlier in this entry).
During the South African War in 1902, the Imperial Military Railway ordered 35 locomotives of the NGR 'Reid ten-wheeler' type. To ensure rapid delivery, the order was split between Dubs and Co and Neilson, Reid and Co. Under the CSAR many of the Class Es, as they were known on this railway, were converted to tender engines, becoming SAR Class 13, while the six remaining were converted to 4-8-2T by the removal of the trailing driving wheel and blanking-off of the opening in the frame. In this form, the five engines (one was withdrawn in the interim) were inherited by the SAR to become Class H1. The last of this class was withdrawn from service in 1966.
Posted by Piet Conradie (for e-mail addr: see profile plse) at 8:58 PM