NOTE: This page should be read collectively together with the other Sugar Cane tramway pages on this blog as general information is scattered across the different pages:
_____________________________________
This loco was dug up from the Umfolozi river bed in 1980 after being lost in the 1925 flood. The remains of the locomotive has not been restored.

This information still needs to be confirmed.

The locomotive was used by the Umfolozi Co-Op Sugar Plantation at Mtubatuba when lost in the flood.

The Co-op had three 0-4-0T engines at the time of the flood:

The relic could be any of these engines. 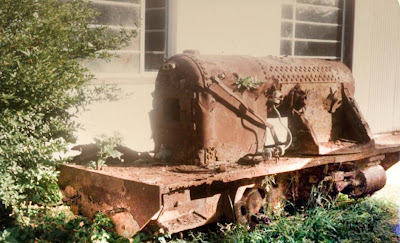 After being dug up, the relic was stored for sometime in the care of Mr. A.B. Wessels at the "Zulutrac" Garage in Umfolozi Village.

By the end of 1993 it was reported that the relic has been moved to the private house of a Mr Preen in Umfolozi Village.

Currently the whereabouts of the relic is unknown.

If you know what happened to it and where it is now, please contact me, thank you.

Sources:
Posted by Piet Conradie (for e-mail addr: see profile plse) at 10:11 AM