A commemorative issue of 10 stamps to celebrate the 150th anniversary of the 1st passenger train to be hauled in South Africa, was released on 25 June 2010. 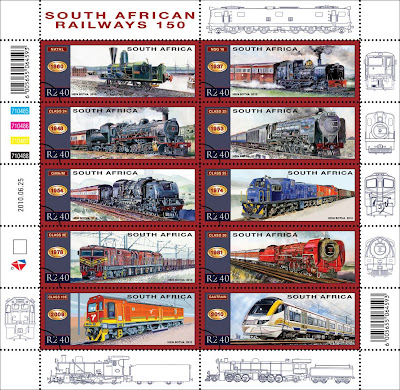 Click on image for a more detailed picture. This image provided by kind permission of the South African Post Office via Boon Boonzaaier (My special thanks to Boon).

Permission is hereby granted to use the mentioned stamp images in your magazine article on the following conditions:
South African Railways 150 Anniversary - Stamp Issue on 25 June 2010

Boon Boonzaaier’s proposal to South Africa’s Stamp Advisory Committee – that there should be a special issue to mark the 150th anniversary of the first train trip in South Africa – has been officially approved. Boon’s specific suggestions were as follows -

1860 “Natal” – the first locomotive to run in South Africa. (Preserved on Durban station)

1937 Class NGG16 Garratt – the most important class on numerous narrow-gauge lines, with 34 built between 1937 and 1968. Many are running today in Wales, Australia and the USA, following closure of South Africa’s once extensive narrow-gauge empire.

1948 Class 24 – the ultimate power on branch lines all over South Africa (except Natal).

1952 Class GMAM Garratt. South Africa was the largest user of the Garratt principle and these engines were the ultimate development of this concept.

1954 Class 25 Condensor. These 90 engines – the largest non-articulated steam locomotives in the world – were designed to re-use their water and savings up to 85% were recorded. No other country employed condensing engines on a scale as large as this.

1981 Class 26. The only example, a rebuilt class 25 4-8-4 known as the “Red Devil”, was used as an experiment to modernise steam traction. Although some 30% saving in water and coal use was recorded, no other conversions were made but the knowledge gained was used in China where steam engines were still being built as recently as 2002.

1981 Class 35 diesel-electric. These units spelled the end of steam traction on branch lines.

2009 Class 19E. These powerful dual-voltage electric locomotives are the latest development of traction power on the Transnet system.

2010 The Gautrain high-speed train running on brand-new, standard-gauge track represents the latest milepost in the development of railways in South Africa.
.
[ Boon’s motivation described Gautrain as “the first high-speed railway development in South Africa”. This achievement, Les Pivnic has pointed out, was actually accomplished 25 years ago by the “Metroblitz” express, connecting Pretoria with Johannesburg in 42 minutes. This is the same timing aimed at by Gautrain, even though the Blitz, running on conventional Cape-gauge track, had to go by way of Germiston. – editor, Railways Africa.