WHAT WOULD HAVE BEEN a priceless steam locomotive on display in a Museum in Port Elizabeth, was, in the mid-1970's, inexcusably sold off to scrap metal merchants - unbelievably by the Museum authorities themselves, after the relics of the Port Alfred 0-4-0ST standard gauge engine named "AID", built by Fox, Walker and Co as works no 352/1878 had been "safely" stored in the museum grounds for several years. This had happened even after the good example set by the restoration the historical NATAL locomotive - which like the AID, was also dug up, after being buried under sand for years. 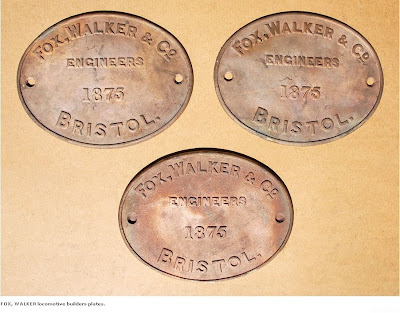 These maker's plates are 12 inches across.

A total of 410 steam locomotives were built by the Fox, Walker company. Today only 3 specimens are preserved. There could have been 4 and one of them could have been in a museum in South Africa. But we lost it all sadly ... read on. 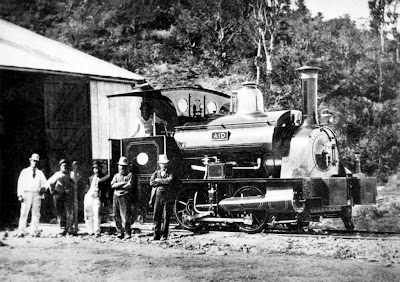 The "AID" shortly after erection in 1878. The Fox, Walker steam locomotives has a characteristic chimney with copper top, the brass dome and safety valve cover and spring balance safety valves and the shapely cab. The copy of this photo was kindly provided by Leith Paxton. The original photo was held by the then South African Railways & Harbours Board.

For this entry, I thought it wise to let the various experts tell, in their own words, what they know about the History of the "AID" locomotive which was built in 1877 by Fox, Walker as their works no 352 (not 325!) for use on standard gauge (4ft 8.5inch) on the eastern side of river at Port Alfred harbour.

THE work on the harbour at Port Alfred, being on the Kowie river, necessitated ferrying Blackie [Hawthorns Leith 162/1859] from one bank to the other as pressure of work demanded it and, to do away with this, it was decided to obtain another engine.

An order was placed in 1877 with Fox Walker & Co of Bristol, through the Crown Agents for the Colonies, and this engine was ship­ped to Port Alfred in two sections on the brigs Frieda and Lena, arriving on 1 January 1878. This was the locomotive named "Aid", works number 325, a saddle-tank of the 0-4-0 wheel arrangement.

Like No 9, Blackie [Hawthorns Leith 162/1859], it was for 4ft 8.5in gauge and was assembled on the east bank. It remained at Port Alfred all its life, and when the harbour construction work came to an end around the turn of the century, the AID was left standing in a shed until shortly after World War I, when it was stripped and buried. [one unconfirmed source suggests 1918 as a burial date - Piet]

In January 1960 the remains were dug up and sent to the museum at Port Elizabeth, where they have lain until the present time. Now drawings have also been traced and will be used by the museum auth­orities to rebuild the engine and place it on exhibi­tion. The writer is indebted to Leith Paxton of Port Elizabeth for information enabling him to obtain the full story behind this engine, which has con­founded locomotive historians for many years.

The story of AID is one of the sadder and more infamous ones in the annals of SA preservation.

The Kowie Harbour Works at Port Alfred were started and then abandoned about 1870. In 1874 they restarted on the West Bank and standard (4'8.5") gauge tracks were laid on which "BLACKIE" [Hawthorns Leith 162/1859] worked although in Port Alfred it is now known to have been named FRONTIER, it arrived in July 1874, and was withdrawn in 1883 on completion of the works and lay around for some years before being exhibited in Grahamstown in December 1897 and January 1898, it was then stored until 1913 before going to Cape Town.

Standard Gauge lines were also laid on the East Bank of the Kowie in 1877 and for these a second locomotive was required, this was AID an 0-4-0ST built by Fox Walker in England, works number 325 of 1877, it was built new for the Kowie Harbour Works. It was used on these works until their completion in 1893 (ten years after the West Bank side was completed).

This loco lay around derelict for many many years until finally it was buried in 1931. In January 1960 it was dug up and the remains taken to Port Elizabeth by the PE Museum for preservation, the parts were stored at the Port Elizabeth Oceanarium. For reasons which I have never been able to fathom, in about 1974 these remains were sold for scrap to Chicks Scrap Metals, an act which must verge on the criminal.

THE question about AID sparks off a very sad episode in SA railways history and one that I was very involved with when I was much younger. AID was exhumed in the early 1960's and brought to PE and dumped on open land in front of the newly completed PE Museum in Humewood. 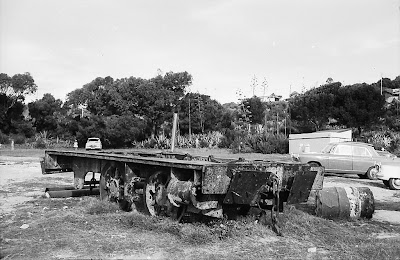 The then local railway historian, Frank Neave was called in to identify it. Searching through the only documented history of locomotives in SA (Day and Espitalier) he stated in was an ex Port Elizabeth Harbour Board engine that was sent to Port Alfred in 1903. This would have been a 3-6 gauge engine. 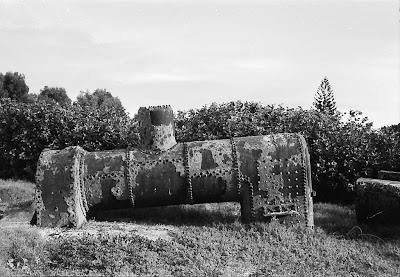 As a spotty face teenager, I cycled across town armed with my tape measure and clip board (something I still do) with the idea of making a drawing of her. One of the sizes I casually took was the gauge, and realize this was a 4-8 engine and not a 3-6. I was in correspondence with Frank Holland in Johannesburg at the time and wrote to him about what I had found. I think I heard him fall out of his chair all the way in PE. This came as a shock to all concerned and Frank Holland gave me the task of identifying who in fact built it. This I duly did after writing to the various specialist in their field in the UK. The SAR bought a drawing of her from Pecketts (who took over Fox Walker) but it has since disappeared. 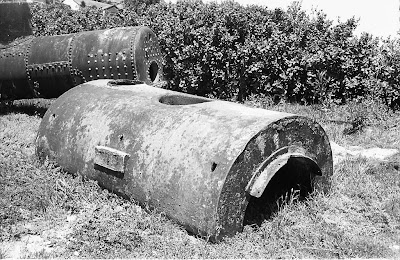 The PE Museum under Dr MacGloughlan had a very adventurous programme to depict transport through the ages. They intended to build a Transport Hall where a 4 wheel tram, the first Ford assembled in SA, etc. would be displayed. Aid was intended to be part of that exhibition. 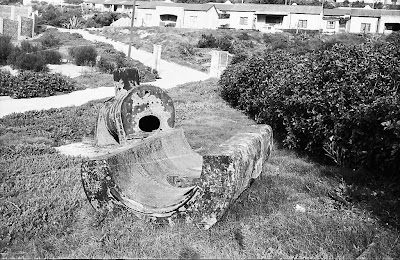 Some time in the 1970's a decision was made by the museum board that it be a Natural History museum only, and the transport wing would be abandoned, and all the exhibits were disposed of. When I heard about it, I phoned the Museum to ask what happened to AID and was told that it sold to Chicks, the local scrap merchant. I immediately phoned Chicks who said the engine had already been cut up. It was a bitter blow.

Many thanks for the confirmation of the details regarding AID. I thought that this may have happened. I am afraid railway history has many instances of historic engines being scrapped. Incidentally Frank Holland gave the works number of this loco as 325. This was actually a loco for the Great Western Iron Co., Soudley, Gloucestershire.

I have on loan extracts made from Fox Walker records in the early 1950s when held at Pecketts.

With regard to the missing drawings I will make some enquires as to where the originals are held.

I had a look at a friend's copy of the second Volume of Frank Holland's work and expected to find it under the chapter on Harbour Board locos but without success though I was a bit pushed for time so may have missed it. Any ideas on this one?

Fox Walker commenced building steam locomotives at the Atlas Engine Works in St George, Bristol in 1864. The firm supplied industrial four-coupled and six-coupled tank engines, mainly saddle tanks. The early records are very incomplete and Lowe stated that little is known about the first ten years trading. They also built a number of stationary engines and were amongst the pioneers of steam tramway propulsion. The first steam tram was tried out on the Bristol tramway in December 1877 and it is probable that the tram engine patented by James Matthews was built Fox Walker & Co. In 1878 0-4-0 tram engines were sent to Rouen to the order of P. Harding, and classed TE and in the same year 0-4-2 tram engines were built for the same customer, type SWTE. Six TE type and twelve type SWTEs were built between 1877 and 1879.

An interesting order was from the Admiralty, Chatham for six 1ft 6in gauge 2-4-2Ts. They were designed for trench engines with Handyside's steep gradient apparatus.

A number of home railways were supplied with six coupled tank locomotives for shunting and goods train duties including the Eastern & Midlands, Whitland & Cardigan, Gwendraeth Valley, and Midland Railways. Nine powerful inside cylinder 0-6-0STs were supplied to the Somerset and Dorset Railway.

The last building that took place by Fox Walker was the Class SWTE tram engines in 1879 followed by four semi-portable horizontal high pressure engines. The last works number was 424 and from 1862 to 1880 approximately 410 steam locomotives were built.

Fox Walker started building steam locomotives in 1864, mainly for industrial requirements and were mostly 0-4-0 and 0-6-0 saddle tanks. The last works number was 424 of 1880, 410 steam locomotives were produced. In 1880 they were taken over by Thomas Peckett and became Peckett & Sons, Atlas Engine Works, Bristol.

There appear to be only 3 preserved Fox Walkers.
SOURCES: