Alfred County Railway (ACR) is an abandoned narrow gauge railway in South Africa, which ran from the southern transport hub of Port Shepstone on the Indian Ocean, via Izotsha and Paddock for 122 kilometres (76 mi) to Harding, KwaZulu-Natal.

You may want to look up the often very confusing! history of the ACR here on Wikipedia.

ACR was finally shut down in 2008 because extensive flood damage to many of the railways bridges along the Hibiscus Coast put these beyond economic repair, and most of the Izotsha rail bridge was washed away.

Thanks to Norman Swart for the following set of pictures taken at Paddock on 5th June 2010. 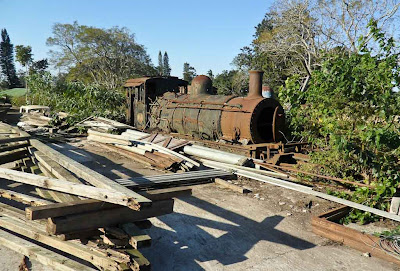 At the small town of Paddock some distance inland from Port Shepstone, a number of forgotten ex-SAR NGG16 Garratts may be found. These rusty engines may be found to the north of and just outside Paddock at "Claasen's Siding" next to an old derelict saw mill. 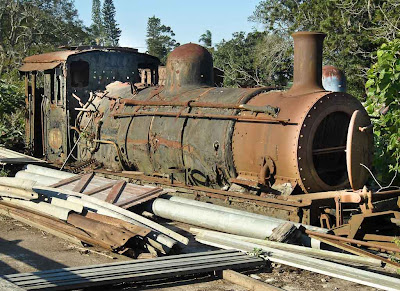 In this, and other pictures, a dome of a hidden locomotive with blue liivery is visible - a photo of the engine from the other side was not possible.

ACR apparently had about 17 NG loco's based at Port Shepstone, and some of these were stored at Paddock. The engines currently at Paddock may have been kept as spares for the few actual running engines. A few of the ACR engines were on loan from Transnet Heritage Foundation, (THF) the others were owned by ACR. 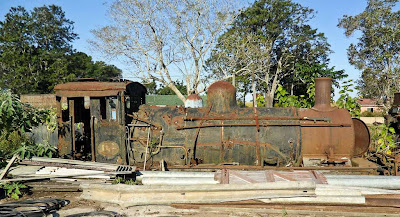 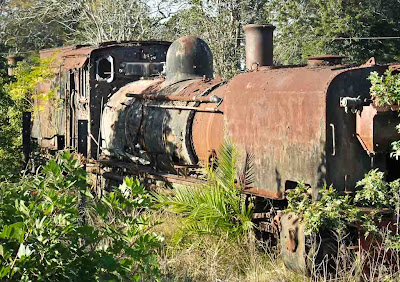 These Garratt locomotives are in a very bad state of deterioration and will need hard work to restore - the term "locomotive graveyard" seems fit at the moment. 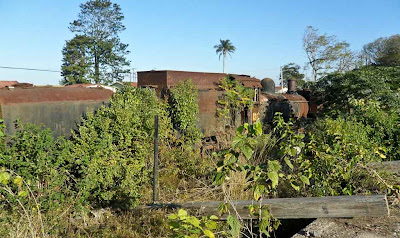 Norman Swart has discovered this sad scene on the 5th June 2010. 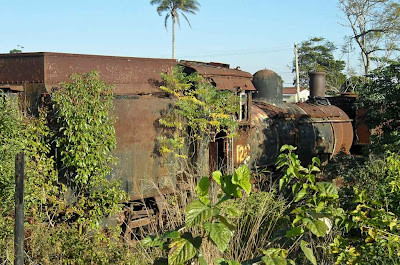 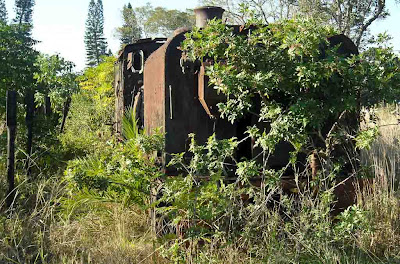 Norman said that because of the thick bush it was nearly impossible to photograph all of the locomotives. 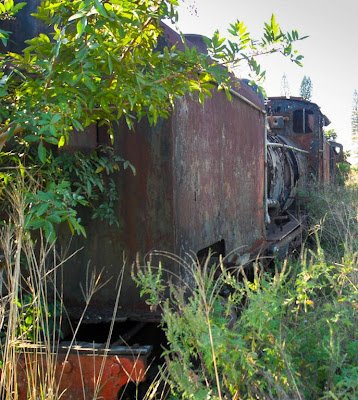 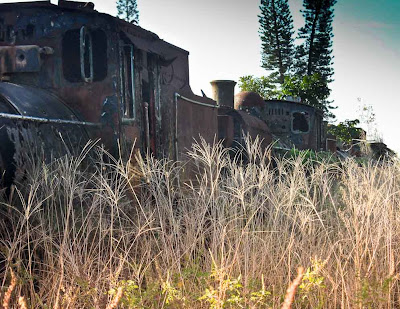 Norman thought that there are about 5 or 6 engines. These are all ex-SAR class NGG16's. 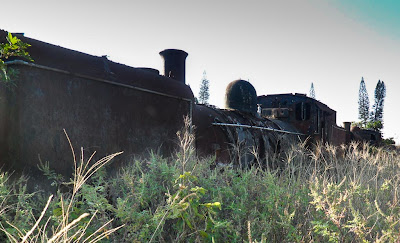 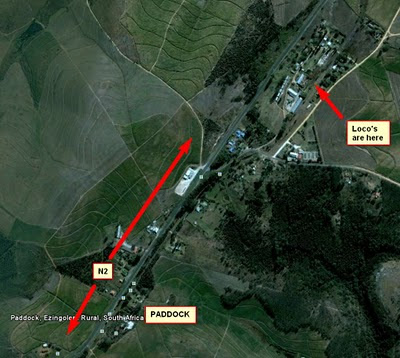 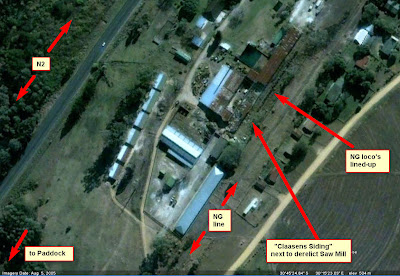 Map 2: Google Earth View indicating position of locomotives next to derelict saw mill siding named "Claasen's Siding". This view is from 2005; by 2010 most of the saw mill's roof had been demolished - evidence visible in locomotive photos above ... 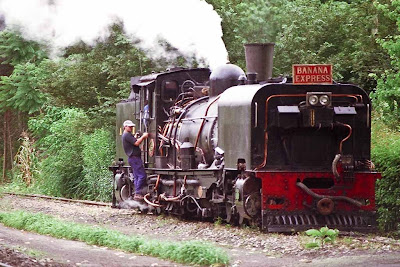 The Banana Express in better days - photo by hinchliff uploaded to Panoramio.

You may find some references on the web to Alfred County Railway:

Below are some YOUTUBE videos showing the Banana Express in action.


BANANA EXPRESS (Alfred County Railway)
Length: 00:02:09, Sept 1999.
Part 2 of 2
COMMENTS: nickblewitt — March 16, 2008 — Part 2 of 2 - We ride the full length of the Alfred County Railway attached to the rear of a freight train from Harding to Port Shepstone in South Africa. The previous day, we had done the southern part of ther line on the steam hauled Banana Express. Part of a trip by Ffestiniog Travel to South Africa in September 1999.

The following two videos do not run "embedded" and you need to keep on clicking to watch them in a new window directly on YouTube.


BANANA EXPRESS (Alfred County Railway)
Length: 00:09:13, Aug 1991.
COMMENTS: Sowerbylads — November 16, 2008 — The Alfred County Railway in Natal, South Africa that ran from Port Shepstone on the Natal Coast to Harding in Kwazulu. This now closed line was the source of motive power for the Welsh Highland Railway in the UK. NGG 16 class Garratts 155, 139 and 141 are seen at work on the Wednesdays passenger mixed from Port Shepstone Beach to Paddock and return. Coaches were added as required on the goods trains that ran to / from Harding. Filmed in August 1991 the week after the Brush with Steam railtour, with David Shepherd. I also met the late Dusty Durrant on that tour. Pic of derelict 141 in current Steam Railway.