NOTE: Information about the Namaqualand Copper Mine Railways is spread over these entries:

A total of 19 locomotives are known for the Cape Copper Company.

Initially two locomotives were employ between the years 1871-1876, but then scrapped and cheaper and more dependable mule traction were used instead.

After completing the coastal section of the Namaqualand line, Richard T Hall was soon tempted to try steam traction on the little railway. He recommended to the directors of the CCC to send a light locomotive, to be tried as an experiment. Hall wrote thus in an article published in the April 1871 issue of the Cape Monthly Magazine:

"The engine - named 'John King', after the head of the late firm of Phillips & King, now (1871) King & Son, Cape Town, (who originated the working of the present productive mines, and but for whose energy and skill Namaqualand would probably have lapsed into destitution and barbarism) arrived here in January last (1871), and on 1st February (1871) commenced its work, and has steadily continued to the present time, and has successfully proved that even with light material and sand ballast, steam power may by used economically in South Africa."

"The great drawback to railways in the country is the scarcity of water, especially in Namaqualand. Our supply along the line is very limited, and necessitates a tender being attached to the engine to carry water sufficient for a twenty mile run. This entails a dead weight of about three tons, which in a more favoured country might be dispensed with."

Later in 1871 another locomotive named "The Miner" was put into use.

The two locomotives ran regularly between Port Nolloth and Abbevlaack, drawing a gross weight of 20 tons up and 35 tons back to Port Nolloth.

When the Swedish naturalist Gustaf de Vylder traveled from Port Nolloth via the copper mine line on 9 April 1873 he wrote in his journal: There are two locomotives imported from England but these, as well as everything sent to the colonies from that country, are of such a bad quality, that when they have been used for a day, it takes 2 weeks to repair them. Because of that, the mules are used instead.

When Sir Henry Barkly traveled around in early August 1873 from Port Nolloth to Okiep via the copper line railway, both locomotives ("John King" & "The Miner") were still operational.

With Sir Henry Barkly's visit, "The Miner" was decorated with rosettes.

Over time the two locomotives proved to be subject to many breakdowns and were more expensive than mule traction. They were scrapped in 1876, when mule transport was reinstated along the entire length of the line.

However, 10 years later, steam was re-introduced - and a futher list of 17 locomotives followed.

In the Industrial Railway Record of April 1968 David Cole gives a list of the 2ft 6in gauge Cape Copper Company steam locos:

Names noted for the locomotives were:

NOTE: It is unsure that the 2 Bagnall loco's ever saw service in Namaqualand - the editor of the IRR noted: "The inclusion of Bagnall 1894 and 2038 is interesting for we have always understood (vide page 268 of Pocket Book 6) that these were at the Cape Copper Company’s Jersey Marine Works near Swansea, Glamorgan, along with six similar Bagnall locos (1963, 1978, 2004, 2010, 2039 and 2056). Is there any positive record of delivery of any of these Bagnalls to either Jersey Marine or South West Africa? - IRR Hon Eds.")

Interestingly Kitsons had the technology to provide the Copper railway company locomotives No's 1-3 [T198, T220 (1886) and T234 (1887)] fitted with steam condensers on the roof, as they were a supplier of steam tram locomotives since 1876. 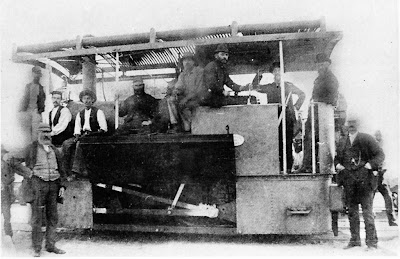 Photo: This is one of the three Kitson locomotives with the condensing apparatus of steam tramway linage - an overhead series of arched transverse tubes. These engines No's 1-3 were supplied in 1886/7. 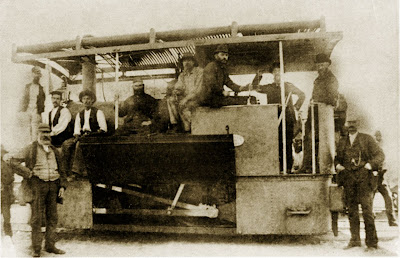 The first of these condensing engines were introduced on 1 August 1886 on the 35km section from Port Nolloth to Abbevlaack station. On 1st June 1887 steam traction was extended to Anenous (a point 2,5 miles beyond the original terminus at Muishondfontein) using the condensing locomotives.

The condensing apparatus consisted of a large number of coils forming an atmospheric radiator over the top of the engine for its whole length. However, the arrangement did not prove satisfactory due to the high ambient temperatures. The condensers were later dispensed with and the engines transferred to shunting service between the Okiep and Nababeep mines.

NOTE: Kitsons entered the steam tramway locomotive field in 1876 building some combined steam cars to W.R. Rowan's design. In 1878 they built three to their own design with vertical boilers, four coupled wheels and inclined outside cylinders. Motion was by means of a modified version of Walschaerts valve gear. All was enclosed in bodywork and the wheels and motions were surrounded by protective plates. The condensing system was placed on the roof and consisted of a series of copper tubes through which the exhaust steam passed, the surrounding air cooling the steam and the condensate returning to the feed water tank. After many trials it was decided to replace the vertical boiler by a horizontal type and this was standardised for future steam trains. Various types of condensers were tried and the final type was a series of arched transverse tubes which were a great improvement.

More than 300 units were built and besides supplying many to the tramway systems of the British Isles, others were sent to New Zealand. Australia and the continent. The last one built was in 1901 for the Portstewart Tramway (Works No. T302). Work numbers for tram locomotives were kept separate and bore a prefix T. (Source here)

These "mountain locomotives", with a working weight of 42.5 tons, were required for the rapid ascent of about 2000ft about 35 miles inland from Port Nolloth. The Anenous Pass at this point was very steep. A very steep gradient was present in "Dick's cutting" and at "Hopkin's cutting it was 1:19 uncompensated.

Initially the mountain locomotives started their work on the most difficult section of the route - between Anenous and Paddagat. 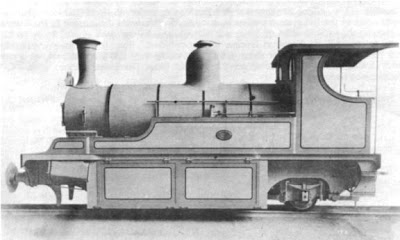 G. Alliez continued: "The official Kitson photograph reproduced here is of Cape Copper Company No.5 (Kitson T258/3486 of 1891); the tank-like structure above the footplate is a shield to protect the J. Hawthorn-Kitson valve gear which had working parts above footplate level."

Below the footplate were dust covers to protect the wheel motion gear from sand blown by wind.

The is a photo of "Clara" all ready to work the Namaqualand Copper Railway. 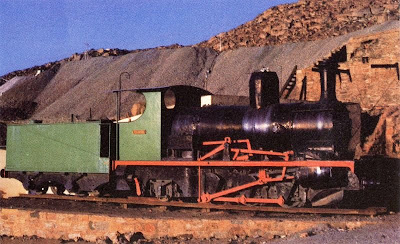 photo A.A. Jorgensen abt. 1980 - Clara as plinthed earlier at the Nababeep Mine. The original tank-like structure above the footplate was used as a shield to protect the J. Hawthorn-Kitson valve gear which has working parts above footplate level - clearly shown it this photo. 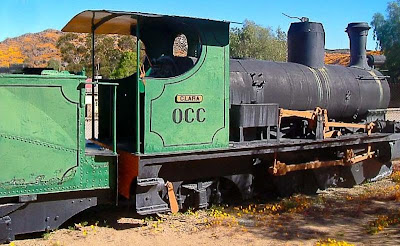 From the junction the Cape Copper locos took over. In 1905 the Namaqua Copper Company had four locos in operation. (source: Frank Jux in his "Rails to the Well" article in the Industrial Railway Record of April 1969) 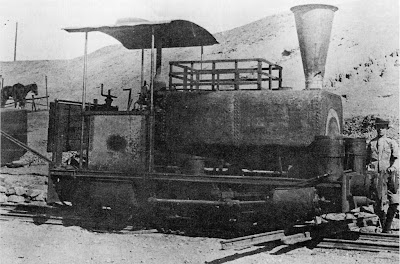 This locomotive, said to be the "Pioneer" from Concordia, was reputedly the engine which the Boers sent into Okiep, in April 1902, with a truck load of dynamite.

Concerning your editorial comment on page 59 of RECORD 24, I would like to say that Kitson's practice of giving works numbers to tenders ceased long before 1890. According to my records Kitson 1980-1985 of 1874 were the last numbers allocated to tenders and were in fact for Taff Vale 43, 44 and 92−95. The batches allocated in the main list for tram engines as quoted by you are agreed, making a total of 292, whereas the Txxx list runs from 1 to 302. I believe the difference of ten numbers may be accounted for as follows:
Although this "T" list commenced with street tramway engines, it also included examples such as the Cape Copper Company's 0−6−2 tender locos, and even a 2−6−2 tender engine of 3ft 6in gauge for an Australian timber firm. From 1900 onwards the Txx series was discontinued although Kitson still recorded engines under the tramway category, as for example the 2−6−4 tanks for the Leek & Manifold.