Sir Liege Hulett had been largely responsible for the extension of the Government railroad from Verulam to Stanger, and then preceding the settlement of farmers in Zululand, he had been instrumental in taking the railroad further into Zululand. In addition, he had developed his own private railway line from Stanger to Kearsney. This railway line was constructed for a total cost of some 18 500 pounds which included all the station buildings, houses, engines, rolling stock and fencing. The line was cheaply constructed with 30lb rails, and had a ruling gradient of 1 in 30. The line from Stanger was brought into being for the conveyance of supplies from the coast to the tea factories, and also for the transport of finished goods, as well as farm produce, to the railhead. 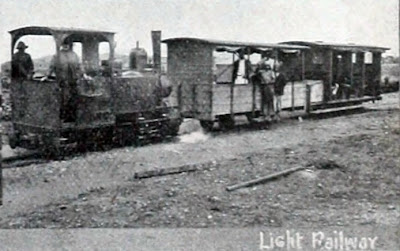 This rare photo, which was published in 1903 in a book titled "NATAL - An Illustrated Official Railway Guide & General Handbook", shows the Kearsney Light Railway in action. The locomotive is clearly an Orenstein & Koppel design if one takes the cab roof design as a clue and compare it with this beautifully restored O&K 173/1896 locomotive in Spain. The Kearsney O&K's are said to be works numbers 723 and 724 built in 1900.
NATAL - AN ILLUSTRATED OFFICIAL RAILWAY GUIDE AND HANDBOOK OF GENERAL IN FORMATION; compiled & edited by C. W. FRANCIS HARRISON.

The above mentioned Guide reported in 1903 as follows on the Kearsney Light Railway:

"THE tea plantations of Messrs. J. L. Hulett & Sons. Ltd. form one of the leading features in the industries of the Colony. They are situated at Kearsney, to the northwest of Stanger, and a light railway runs from Stanger Station to the factory, a distance of eight miles [12,8km]."

"The construction of this admirable little line was undertaken on the initiative of Messrs. Hulett, and a laudable enterpise it is. The total cost was £18,5oo, which sum includes all station buildings and houses, engines, rolling stock, fencing, etc. It is built on the 2-feet gauge, and is splendidly laid with the 30 lb. type of metals. The country through which it passes is undulated and picturesque. The ruling gradient is one in 30, and the locomotives employed are respectively 50 and 30-horse power, the larger of which can haul with ease a load of 20 paying tons."

"The railway was opened with great eclat on the 2nd January, 1901. It is worked by Messrs. Hulett's own staff of station-master, platelayer, and train men. and is equipped with two engines, two carriages, and five trucks, together with all necessary buildings and appliances. First and third-class passengers are conveyed at a throughout rate each way of 1s. first-class, and 6d. third-class."

"The line enters a very productive country, and, besides proving an immense advantage to Messrs. Hulett's businesses, and to the planters and farmers in the Kearsney and neighbouring districts, it attracts a considerable native passenger traffic." 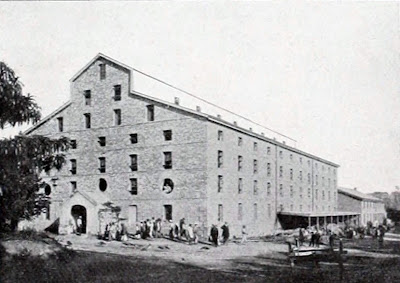 The Tea Factory at Kearsney around 1902.

"The wagons carry a net weight of five tons, being principally used for conveying the heavy tea traffic from the mill, and returning with coal and stores. Passengers and goods are of course transferred at the Stanger Station to the Government trains. The Kearsney train makes connection at Stanger with the passenger trains to and from Durban."
NOTES
Article on Kearsney-Stanger Light Railway
from Darnall Library webpage
Author unknown
This little railway of 24 inch gauge, and the two small trains using it, were originally organised by Sir Liege Hulett and his sons, of Kearsney, Natal North Coast. It was Natal's only private passenger-carrying railway, opened by the estate in 1901, and connecting with the main-line trains at Stanger.

The train rails (at least) first saw service in East Africa: Nairobi to the Coast of East Africa. The book, "the Maneaters of Tsavo" was written about man-eating lions attaching and devouring people working on this railway and train, in 1898. The Huletts somehow managed to get it all across from East Africa, and re-set it up, first as one little train, later as two short trains, to run backwards and forwards between their tea estates, later sugar, at Kearsney and Stanger town.

The Colonial Governor, Sir Walter Hely-Hutchinson, officially opened the Hulett's railway on 2nd January 1901. It set off from the old Tea Factory of Sir Liege Hulett, at Kearsney. It crossed the road which now runs between Stanger and Grey Town, and stopped at a little station about 3 miles further on down the line, about behind where the Kearsney Post Office now stands, near the store there.

It then meandered down through the Balcomb estates, over or beside "Doctor's Kop" Farm. There is a distinct dip in the land there, (between the Old European school hostel, the Assembly of God Church and the road which goes up the hill to Lot 14).

It then looped down through what is now referred to as "New Town", the European residential area of Stanger Town. Before there were any houses there. It ran through Lot. 327, Curtis Smith Street, and Lot 584, 1st Avenue. Carrying on to across Theunissen Road, across the old main road which runs between Stanger and Shakaskraal.

It then bypassed where the new electrical transformer is standing, outside the Borough, Lavoipierre Buildings, and on down to come into the side (Durban side) on the main Stanger to Durban railway line, and into the side of the Stanger Railway Station.

Eventually, there were two little trains, both with it's own small high chimney, Puffing-Billy-type mounted on two pairs of wheels each, semi open cab and barrel­type front horizontal tank changer.

The one train consisted of the engine and 4 open trucks, for haulage purposes of tea etc. This was driven by Mr Adams and then Mr Williams.

The other train consisted of the engine and 3 carriages, built of Burmese Teak wood. The first carriage ferried Indian passengers about. The second carriage ferried European people about, and the last carriage was for postal services, mail and parcels etc.

The Guardsman stood in the last carriage. He used to wave a red-glassed Acetylene gas lamp about, so that they driver could see, to guide him when it was safe to move the train. This lamp (what is left of it) is in the Stanger Museum, 10/1 323.

The first Guardsman was an Indian man called Juganatham. Mr Brandon was the driver of this passenger train.

The fare was 6 pence per person for a single journey.

The journey took 1 1/2 hours up to Kearsney and 1 hour down to Stanger.

It left Kearsney at 9am daily and the last return journey from Stanger was at 5pm. Uphill, the train travelled extremely slowly, 10 miles per hour or less, which gave passengers who needed to, the opportunity to jump off the train, relieve themselves and run to catch up with it again!

This historical old train service ceased to operate after about early 1942. It is probable that the rails were lifted in the early 1950's, to make way for the building of the houses through "Newtown" suburb. The rails were used in the cane fields around the Darnall and other Hulett estates, to run the small cane carrying trucks from the fields to the Darnall Sugar Mill. Some were used for fence posts.

Off Reynold Street opposite the side of the Borough Lavoipierre Buildings, lies the remains of an embankment, upon which is a sign "Kearsney to Stanger Railway embankment. Last used in 1944".
REPORT of possibly a 3rd Locmotive used on the Light Railway.
In the Industrial Railway Record of June 1971, article writer K.P. Plant speculated that a 3rd locomotive - Kerr Stuart 764, may have been acquired for the Stanger-Kearsney tramway:

On 19th September 1903 J. L. Hulett & Sons Ltd of West Street, Durban – one of the major sugar producers in South Africa – ordered one of the earliest of their many locomotives. Kerr Stuart 764, a "Waterloo" class 0−4−2 side tank, was painted in "standard" colours and shipped to Durban for the all−in price of £1,038; construction costs were estimated at £776. Its most likely destination was the Kearsney Estate. This was linked to the main line at Stanger eight miles away by the Stanger-Kearsney Light Railway which had been opened in 1901 (2nd January or 13th March? – authorities differ). It was cheaply constructed with 30lb rails and had a ruling gradient of 1 in 30. In addition to the normal traffic of sugar and tea, passenger trains were operated until about 1930.

The railway was closed at an unknown date and although a lot of the track has been lifted some was incorporated into the Darnall Estate system. Kerr Stuart 764 seems to be unknown to South African enthusiasts, and it would appear to have been scrapped many years ago. In 1911 and 1915 spare parts were sent out and ‘K.Y.’ in the shipping mark for the former consignment (‘J.L.H., K.Y., DURBAN’) could indicate that the destination was Kearsney.