In July 2011 Rick Turner sent me a photo with these comments: Saw your web site and thought that I'd contribute this - a tank loco that we used to use on Loraine Gold Mine in Allanridge (north of Odendaalsrus) in the Vrystaat during the 1980's for hauling ore cars on the surface from the #3 shaft to the plant at #1 shaft, where this picture was taken. 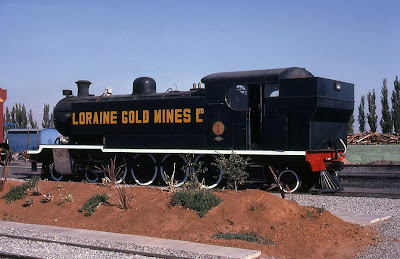 It dates from 1983 some time - looking at the clear blue sky and light it would seem to be winter, so around the middle of that year. I don't have any more info on the loco unfortunately, nor do I know where it now is.

During its working life, it would have hauled reef over a distance of 8km between 3 shaft and 1 shaft at Allanridge, where the offices, workshops, loco shed and reduction plant were located. At 3km there was a 4km branch which lead to an exchange siding with the SAR.

The Loraine Gold Mine was popular with photographers as a dirt road along the mine's railway provided many vantage points. Also the locomotives were kept in immaculate condition!

21 July 2011:
I consulted with Jacque Wepener, who is the specialist on things railways in the Free State, and he in no time provided me with photos and information about the whereabouts of this locomotive: Currently it is plinthed at the old Mine Club House at Allanridge, and had been there for more than 10 years - it was moved there when access roads were re-built.

The following four photos, which were all taken on 10 January 2008, are courtesy of Jacque Wepener. 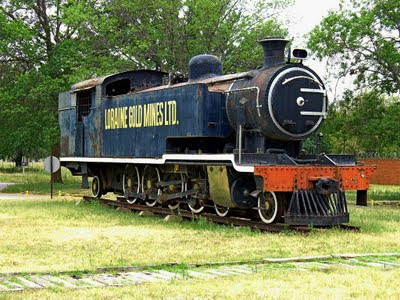 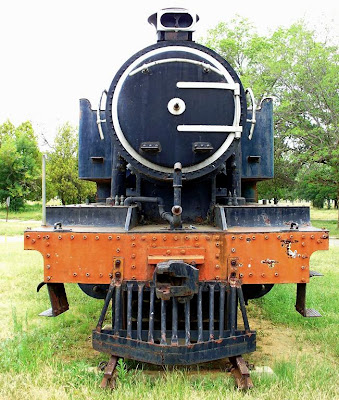 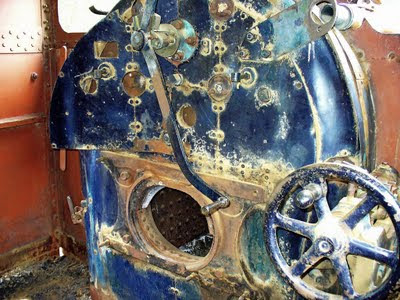 This builder's plate appears on the locomotive's cab, and actually belongs to the original Loraine Gold Mine No 2 NB locomotive built 3 years later in 1954. 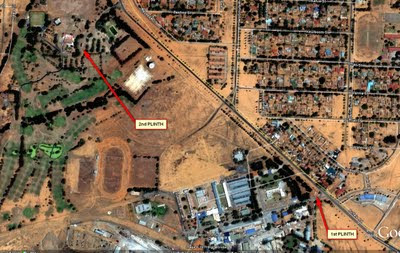 11-08-2003 Google Earth view of the old mine's club including the golf course, the town on the right, at the bottom of the image the workshops and offices of the old mine can be seen.

Posted by Piet Conradie (for e-mail addr: see profile plse) at 10:26 AM