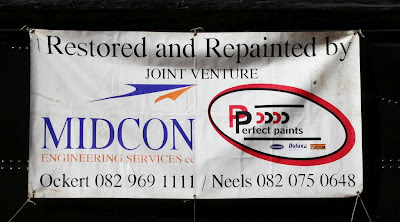 The locomotive has been restored cosmetically by these generous firms. 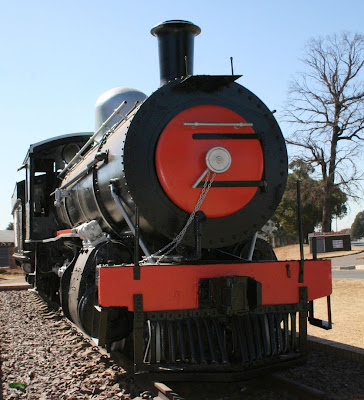 A monument to our past - Looking nice again after many years of neglect. This 15 July 2012 image courtesy of Gert Beetge. 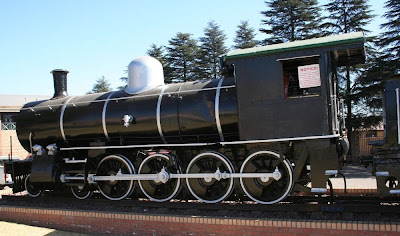 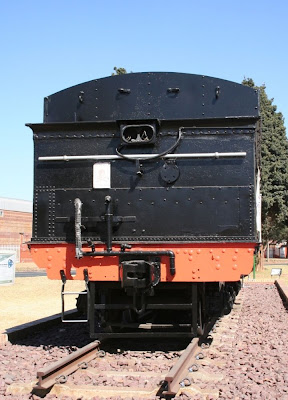 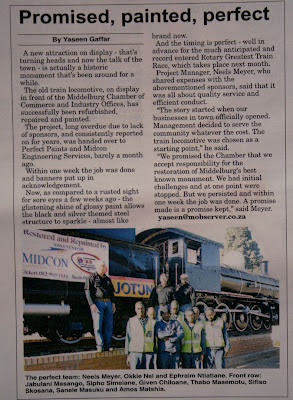 2012 Report in the Middelburg Observer courtesy of Gert Beetge 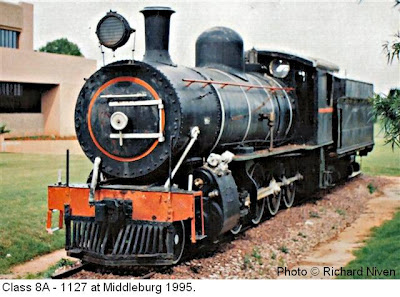 Earliest photo of this locomotive as taken by Richard Niven in 1995. 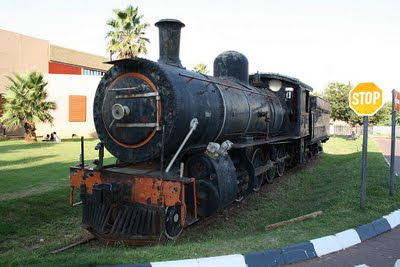 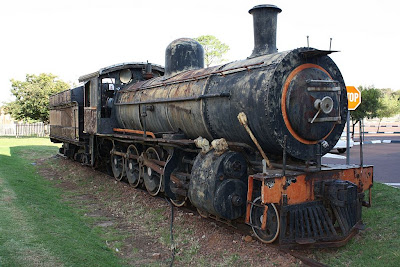 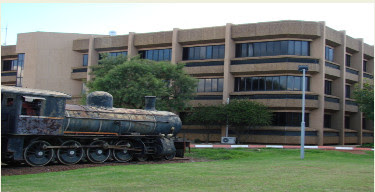 By August 2011 I was not sure if the locomotive, donated by the Transnet Heritage Foundation to Middelburg municipality, was still plinthed at the municipal offices - even though the picture above appeared on their main webpage slideshow - Google Earth seemed to have no record of the engine, and I feared that it was likely to have been relocated or even scrapped?

Fortunately Gert Beetge came to my rescue with good news: The locomotive had been relocated a short distance away to a more visible position along Walter Sisulu Street, and plans are underway to restore the locomotive cosmetically - hopefully around November 2011 - if sponsors can be found soon enough.

Unless indicated otherwise, all the following photos were kindly taken and provided by Gert Beetge: 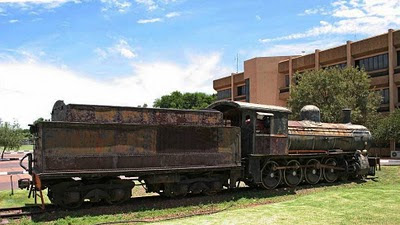 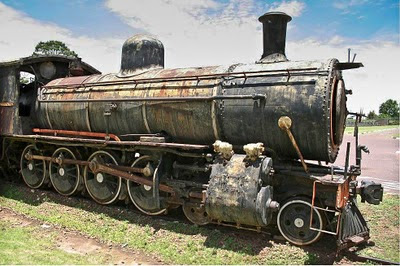 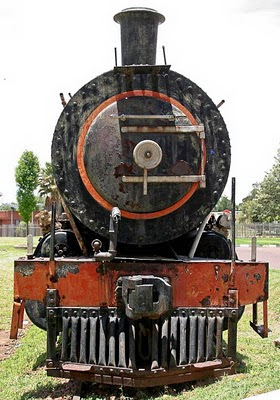 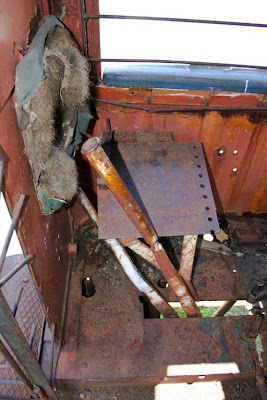 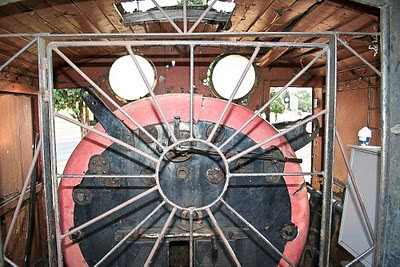 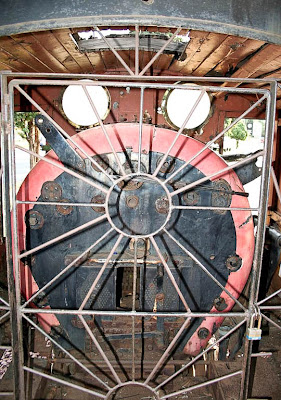 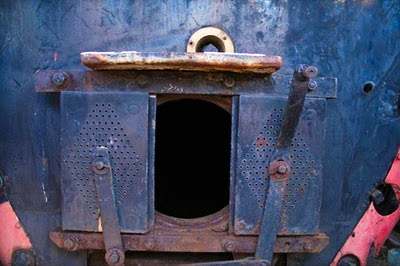 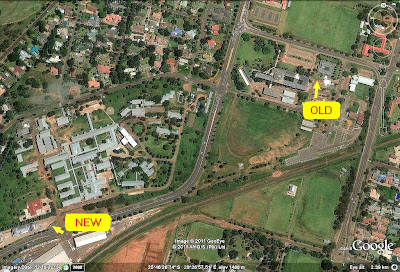 This Google Earth capture shows the old location of the plinth at the Municipality and also the new plinth at the Middelburg Information Centre along Walter Sisulu Street. 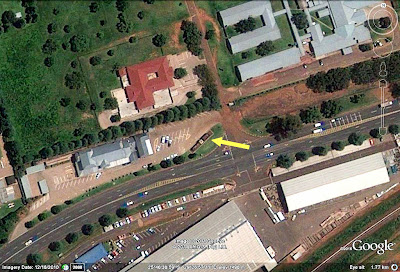 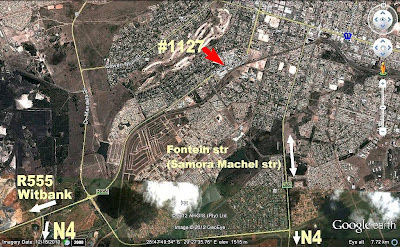 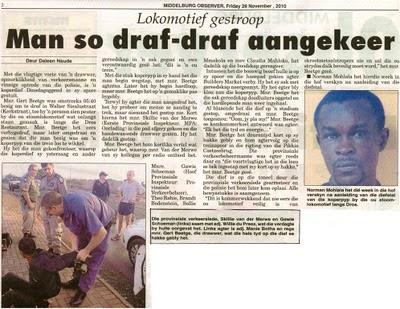 This article (in Afrikaans) printed in the MIDDELBURG OBSERVER, tells how Gert Beetge, while doing an early morning jog, was instrumental in the arrest of a scrap metal thieve who was caught red-handed collecting copper pipe off the old locomotive. His excuse? "It's just an old Train!" This happened in November 2010. 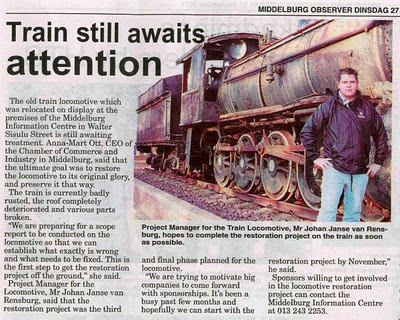 Latest status as reported in the MIDDELBURG OBSERVER dated 27 Sept 2011. 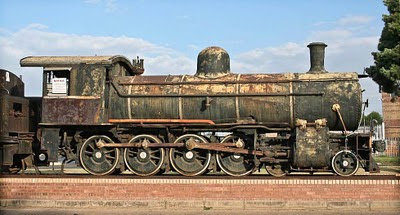 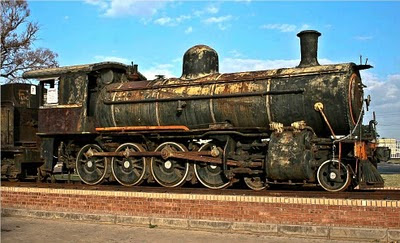 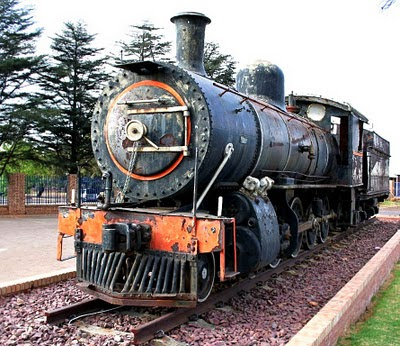 The locomotive dates from 1902, however the boiler plate shows that this boiler had been in use since 1929, and that the last boiler certificate expired on 8 June 1973.
A sister engine #1097 is plinthed at Potchefstroom station.


SAR Class 8 4-8-0 "Cape 8th"
The Cape Government Railways (CGR) 8th class was conceived as a mixed-traffic locomotive equally suitable for goods or passenger work. They were designed by H.M. Beatty and had larger driving wheels than the 7th class. The 4-8-0 examples were actually based on a pair of 2-8-0 engines imported by the CGR in 1901 from the American Locomotive Co, which later became the SAR Class 8X. While they retained the bar frames of these engines, Beatty added a bogie to improve the ride. The first order from the CGR consisted of 23 locomotives delivered by Neilson, Reid and Co in 1902 and 1903 and were placed in service throughout the colony. They became SAR class 8.
In 1902, 40 engines of the CGR 8th-class design were ordered by the Imperial Military Railway from Neilson, Reid and Co, and Sharp, Stewart and Co. These became the 8L-1 on the CSAR and later Class 8A on the SAR.
Under AG Watson, chief mechanical engineer of the SAR during 1929-35, many of the front ends of the 8th classes were redesigned, using piston instead of slide valves, and the engines were superheated.
The 8th class had fine engines, and saw service on every system of the SAR, becoming the mainstay of motive power on many branch lines in the 1920s. They ended their days on shunting service until 1972 when all were withdrawn. 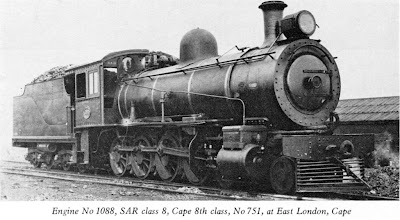 This photo of SAR Class 8 no 1088 showing the locomotive in the form which the class 8 was originally built. The Class 8A would appear identical. Of note is the Stephenson slide valve gear visible in the photo. In the years 1929-36 when AG Watson was chief mechanical engineer of the SAR, many of the class 8 locomotives were upgraded with piston valve gear, such as is visible on the locomotive plinthed at Potchefstroom station. (The original photo above was taken by SH Carter and appears in DF Holland's Steam Locomotives of the South African Railways.)
ex-CSAR No's 401 - 440.

JULIEO – THE TRAIN OF FAME

(Original source of this article is HERE) 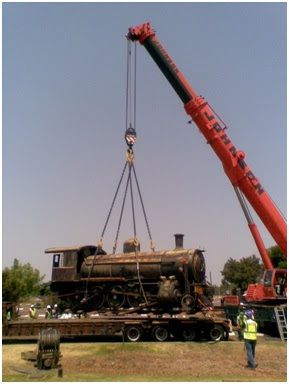 The famous ‘Julieo’ alias Eleven Twenty Seven train was donated to Middelburg in 1972 where she rested for 26 years at Steve Twshete Local Municipality in Middelburg Mpumalanga.

The train was rescued by Mrs. Anna-Marth Ott, CEO of Middelburg Chamber of Commerce

Then the imaginative BIG move started for this 61 ton Locomotive. Months of planning to get the timing 100% for this move to the Busmid Building at the Chamber of Commerce. The big day was on the 6 October 2010, the town was filled with Riggers, Safety Managers, Managers CEO’s of the sponsors, 71 ton Crane, and Lowbed Trucks, it seemed like Middelburg was moving.

The moving action took a full 12 hours to complete. Julieo had to be treated for some serious ‘einas’ that happened as a result of a lack of maintenance over the 26 years at the municipality. 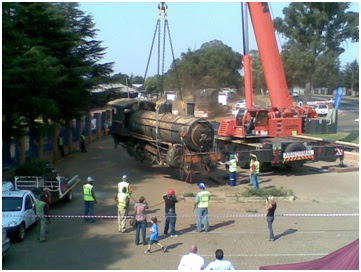 Nothing ever runs smoothly. During the lifting process to place Julieo on her new laid tracks at the Busmid Building in front of Dros, the crane had to put her down because the ground was unstable and the huge crane’s feet started sinking into the ground. 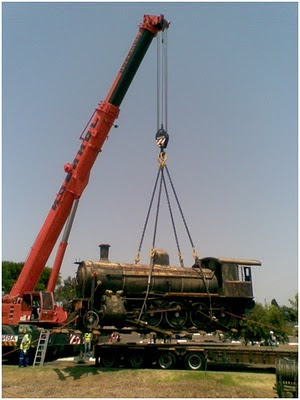 At 18h18 Julieo was placed on her new honored tracks for a well deserved rest and renovation that will be driven by the Middelburg Rotarians. 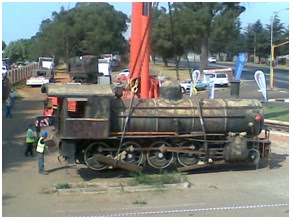 This day would never have been possible without the generous sponsorships from:

Posted by Piet Conradie (for e-mail addr: see profile plse) at 11:57 AM

Email ThisBlogThis!Share to TwitterShare to FacebookShare to Pinterest
Labels: * Middelburg MP, = Sharp-Steward and Co 4863 /1902, Information Centre, SAR Class 8A no 1127