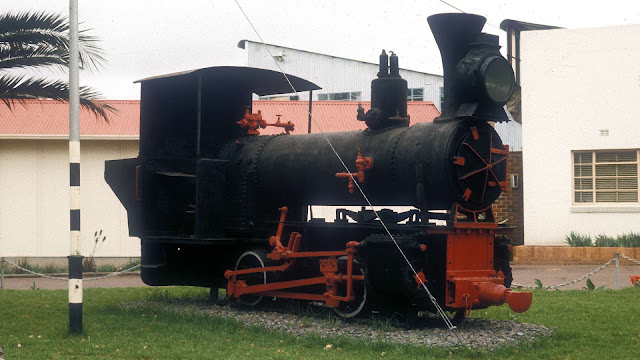 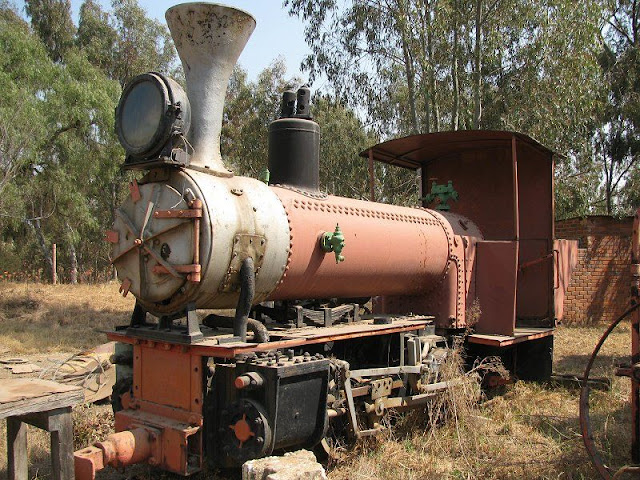 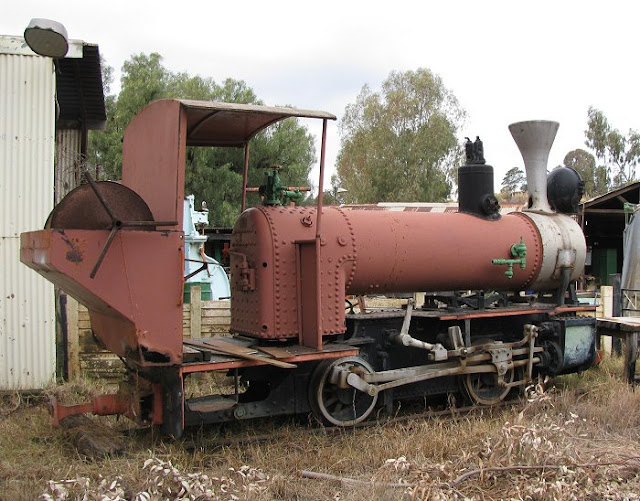 Derek Walker spotted this strange little engine plinthed somewhere in the yards of the SANRASM at Krugersdorp. Indeed a contraption! Looks like someone had fun welding together bits and pieces from all over !!! What a disfigurement! An immense challenge for any restorer.

Fortunately, with the clues Derek gave - namely that the boilerplate is from Orenstein & Koppel, and that he assumed the watertank was located below the boiler, this was enough to identify the loco with the help of John Middleton & Huw Williams publication "Industrial Locomotives of South Africa 1991" plus amendments up to Sept 1995. 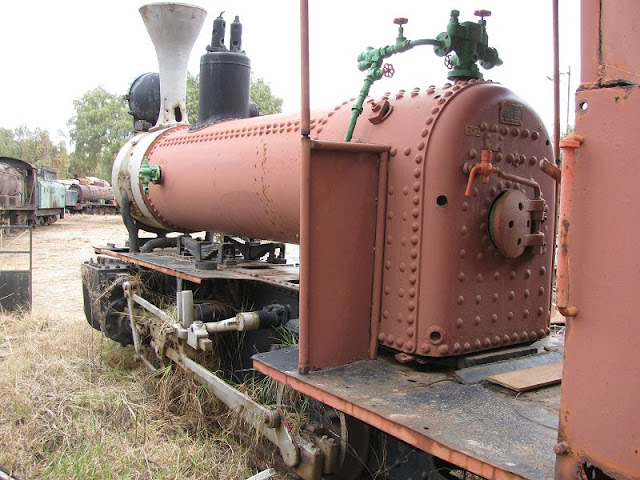 The "boiler on wheels" looks so queer because:
This locomotive is built for 2 feet 0 in gauge by Orenstein & Koppel A.G., Berlin, Germany; it was built in 1936 as works no 12691. It has a 60HP design and is a 0-4-0WT type; "WT" indicates "Well Tank" as the water tank is located below the boiler, and between the wheels, in order to lower the center of gravity on the narrow gauge.

The locomotive O&K 12691/1936 started life as No 2 at New Machavie Gold Mine Ltd, at the Buffelsdoorn Mine near Klerksdorp, where she joined No 1, her sister O&K 12689/1935 at the same location. New Machavie also acquired a 3rd 60HP O&K no 12993/1937. The mine closed in 1945, after which  O&K no 12691 was sold to Dominion Reefs Ltd, also near Klerksdorp. The fates of the sister locomotives are unknown. By at least 1973 no 12691 was plinthed in front of the offices of Dunns Engineering in Witbank. After Dunns went bankrupt in  Aug 1994, the remains of the little engine was stored at SANRASM Krugersdorp until that  site's demise and clean-up around 2010. Sandstone Estates rescued the "scrap" and the undertook the mammoth task of practically completely rebuilding her into a beautiful working steam engine which was proudly presented at the 2015 Stars of Sandstone event. 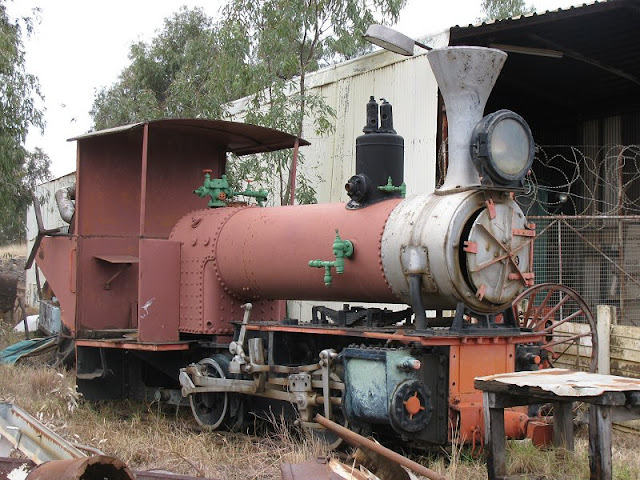 At least since 1973, the locomotive was "preserved" outside the main offices of Dunn's Locomotive and Boiler Engineering Works (Pty) in Witbank. 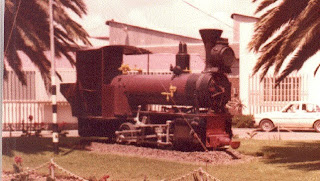 Photo courtesy Hannes Paling showing the O&K plinthed in Witbank at Dunn's. The oversized headlamp was obviously later swopped with another non authentic one ... not a problem with locos coming and going all the time at Dunn's! 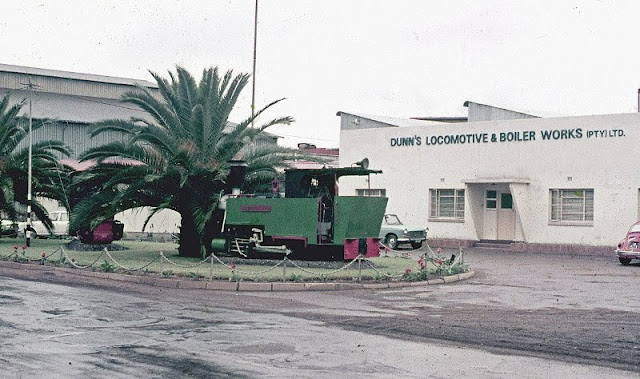 This photo was taken by Dennis Mitchell in Nov 1974. Zezela no 3 is plinthed in the middel of the picture, the O&K loco is barely visible to the left.
The Dunn's firm went in liquidation and finally closed down in August 1994. Subsequently the O&K locomotive was moved to SANRASM at Krugerdorp - where she still was in 2009. With the demise of the SANRASM site the remains of the little engine was rescued by Sandstone and lovingly restored in Bloemfontein at the Sandstone facility. Many images of the restoration process may be found on the Sandstone Heritage site by entering the number 12691 into the search box.

The next series of 2015 images have been sourced from Sandstone Heritage pages, 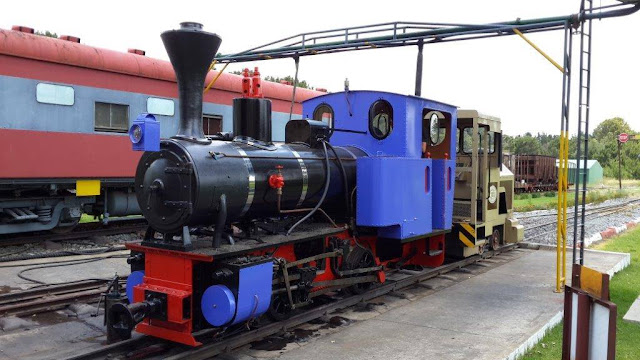 Resurrected in Bloemfontein at the Sandstone facility by Lucas Nel and his team, O&K 12691 shortly after it arrived at Sandstone. Image: Sandstone Heritage 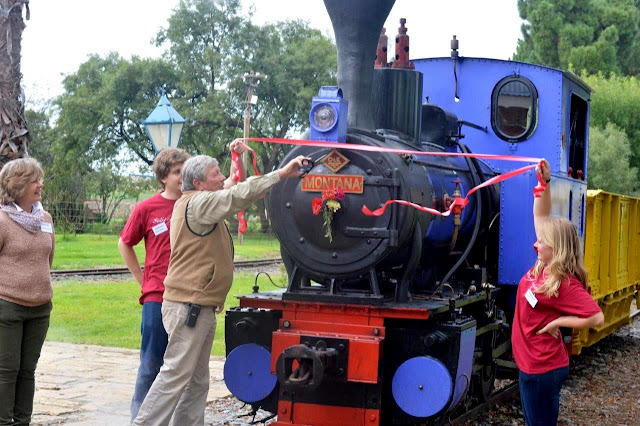 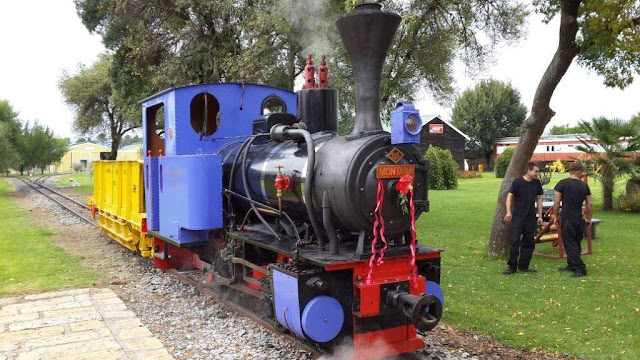 MONTANA with a mine hopper in tow - the hopper also carries the name NEW MACHAVIE GOLD MINE LTD CO where Orenstein & Koppel 12691/1936 was first put into service. Image: Sandstone Heritage 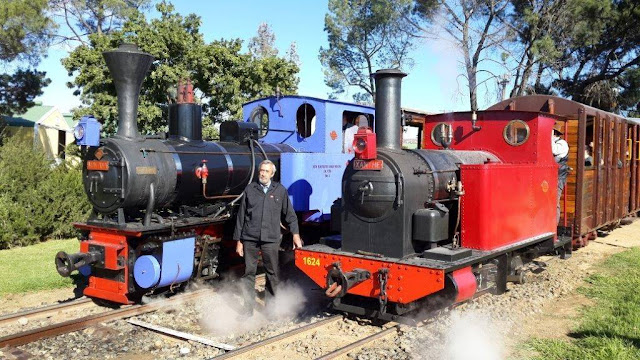 Orenstein & Koppel 12691/1936 "MONTANA" on the left with master locomotive restorer Lucas Nel in the middle. On the right is Avonside 1624/1913 "IXANTHE". Both engines were rescued in extremely poor state from the SANRASM site at Krugersdorp, and truly tested the determination and skills of Lucas and his team in Bloemfontein to revive these current beauties back to life!!! Image: Sandstone Heritage 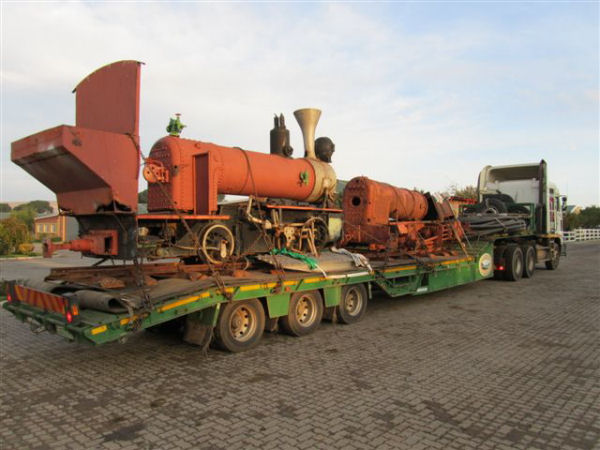 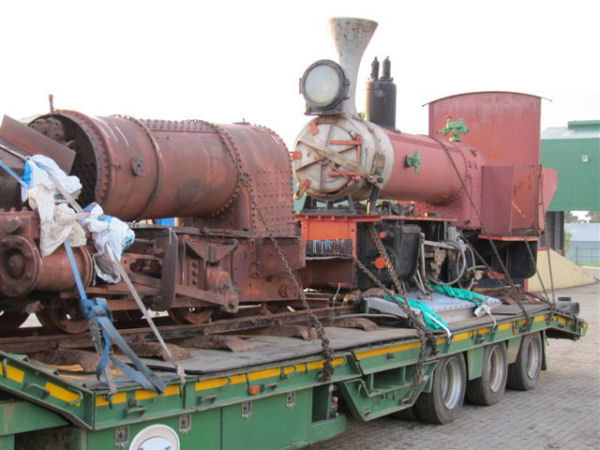 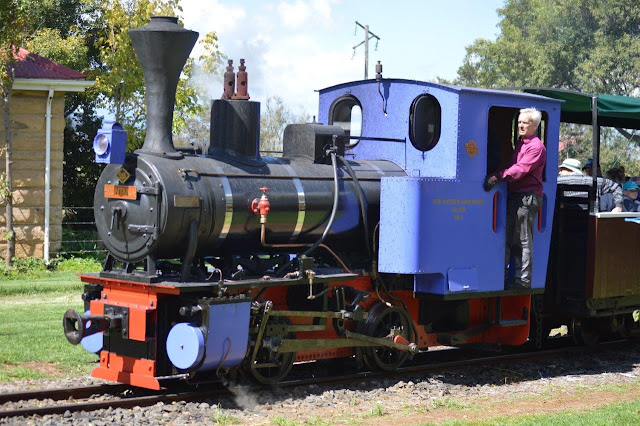 The 60 horse power steam locomotive has cylinders with 230mm diameter x 325mm stroke length. The wheels have a diameter of 650mm, and the distance between the 2 axles is 1,6 meter. Below the boiler between the wheels the water tank capacity is 750 l, while the engine could carry 600 l of coal. The empty weight of the loco is 8,4 tons, and the working weight 10,6 tons. The maximum speed of the engine is 25km/h. 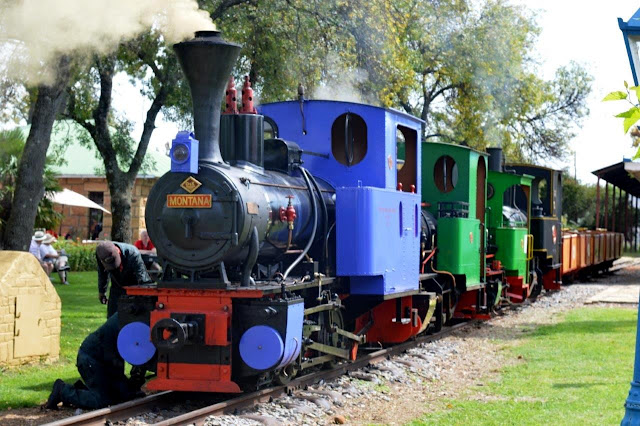 
In the less than 5 minute Youtube video above you will get several brief glimpses of O&K 12691/1936 "Montana" steaming at the Stars of Sandstone 2015 event.


From the O&K Catalogue

Peter Ziegenfuß, from Cologne in Germany, has kindly provided a copy of a relevant O&K catalog page, with specification details about the 60HP 0-4-0WT locomotive: 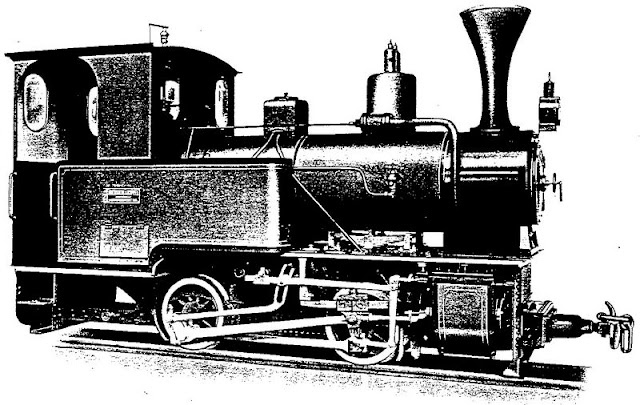 The 600mm gauge locomotive was available in various power versions: 50, 60, 90, 160 and 180HP. The catalog stated that in the lower powered versions a "good working" spark arrestor was installed in the conical chimney. (For the higher powered locos the arrestor was placed in the smokebox.)

The engine has cylinders with 230mm diameter x 325mm stroke length. The wheels have a diameter of 650mm, and the distance between the 2 axles is 1,6 meter. The water tank capacity is 750 l, while the engine could carry 600 l of coal. The empty weight of the loco is 8,4 tons, and the working weight 10,6 tons. The maximum speed of the engine is 25km/h. 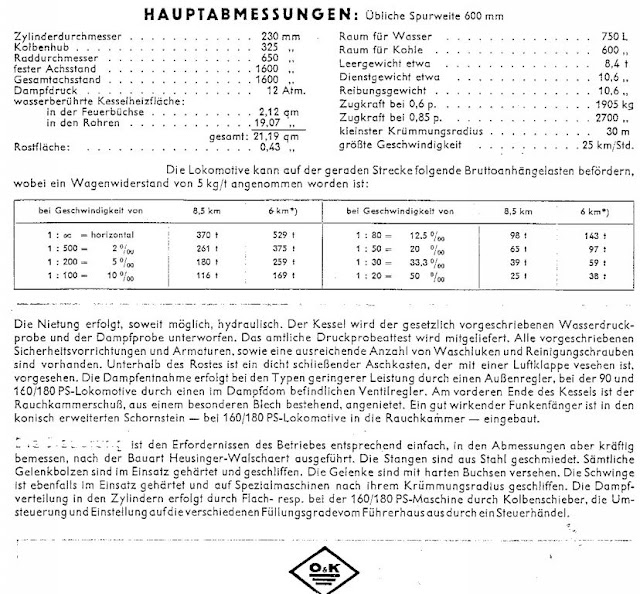 This image, with text in German, contains some details about the specifications of these locomotives.

QUESTION - Are there any photos of the original engine?

We currently do not have a picture of this engine in the days when she was still in operation at the mines. Perhaps someone can dig up a picture! The following pictures have been sourced from Martin Murray's web page "Preserved Orenstein & Koppel Steam Locomotives" and these give some indication what the 60HP 2ft gauge O&K locomotive at SANRASM may have looked like in her earlier life. These little workhorses consisted of fairly standard designs, which did not change for much many years, and some of the engines were built in advance to be available "off the shelf" when the customer wanted one or more.

Bear in mind that the two 600mm gauge engines below were 30 and 50 HP designs, where as the loco at SANRASM is a 60HP design, so some small differences are to be expected. 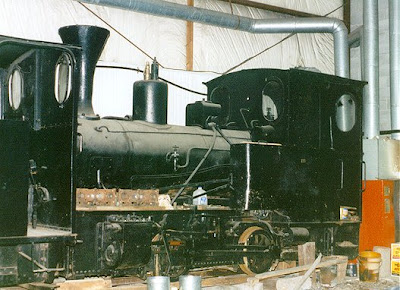 1998 photo by Martin Murray - showing O&K 12721/1936 - 50HP 2ft gauge design; this engine worked on the Carl Brandt railway at Bremen in Germany and was later sold to a private buyer in the USA where this picture was taken - picture sourced here.

Some O&K locomotives which have worked in South Africa:
Orenstein & Koppel brief Notes:

First founded in 1892 in Schlachtensee, in the Zehlendorf district of Berlin, and known as the Märkische Lokomotivfabrik, the O&K factories expanded to supply the Imperial German Army under Kaiser Wilhelm II with field service locomotives or Feldbahn. All manner of railway equipment were supplied to the Army. Feldbahn locomotives were built by other manufacturers too. Because of strained capacity at the Schlachtensee shops, work transferred in 1899 to a site in Nowawes, later Babelsberg, near Potsdam. Around 1908 the firm of Gerlach und König in Nordhausen was taken over, and petrol and diesel locomotives were built here under the trade mark Montania.

About 14000 O&K locomotives were built between 1892 and 1945. Many of these were of the light Feldbahn type for 600mm gauge, and quite a few of these found their way to Southern Africa. Unfortunately most of the units have been scrapped long ago.