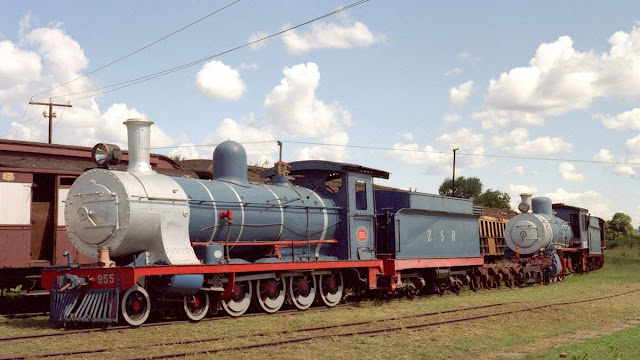 The Zambezi Sawmills company was founded in 1916 to exploit forests of Rhodesian Teak on the north bank of the Zambezi above Livingstone.

The timber is hard and strong and termite-resistant and found a ready market as railway sleepers, parquet floors and door and window frames in all parts of Britain’s Rhodesian colonies (including what is now Zimbabwe).

Initially the timber was dragged to the river by oxen and transported by river barge downstream to a point near Livingstone from where it was hauled the few kilometres to the town in wagons running on wooden rails drawn by traction engines modified so that the front wheels ran on the tracks and the large power wheels ran outside them.

In 1917 Zambezi Saw Mills installed new machinery in Mapanda Forest, 48 km west of Livingstone.
By the early 1920s the forests near the river were used up. The teak forests extended three hundred kilometres north-west and a 3 feet 6 inches railway was then constructed into the forests from around  1924 onwards using wrought iron rails which had originally been used for the first railway in southern Africa, the 1861 Capetown-Wellington line.

From Livingstone, where it branches off the Bulawayo-Livingstone-Lusaka main line, the branch line extends about 166 km north-west to Mulobezi, later extended to Kataba (172 km). The private company had eventually created one of the longest logging railways in the world to serve its sawmill at Mulobezi.

In 1925, ZSM (Zambezi Saw Mills) railway changed its name to Zambezi Sawmills Railways (ZSR) and passengers were accepted, travelling at their own risk, perched on top of timber on flat wagons. They were exposed to lions and other wild animals, the weather and fire thrown from locomotive chimneys.

The railway was operated using 2nd-hand locomotives purchased from Rhodesia Railways, South African Railways and Nyasaland Railways - the ZSR operated multi-coloured engines. Interestingly engines were not renumbered under the ZSR - they kept their previous numbers. Over a period of 50 years, some 30+ locomotives appeared on the ZSR roster.

In 1968 the government of the Republic of Zambia, through the Industrial Development Co-operation (INDECO) act acquired a 51% share of all privately owned organisations including the ZSR.

In November 1971 one SAR Class 8A locomotive, number 1126, was sold to ZSR.  This was the last locomotive to be purchased by this logging company. She then worked on forest mainline trains and also on specials on the Mulobezi-Livingstone line until 1973. [Originally built in 1902, by Sharp Stewart and Co. with works no 4862, after being ordered by the Imperial Military Railway, which became the CSAR (Central South African Railways), she became part of the SAR (South African Railways) in 1910.]

The INDECO state involvement led to the ZSR going bankrupt in February 1973, and Zambesi Sawmills Railways ceased trading. The ZSR Locomotive Repair Sheds at Livingstone were abandoned. Railway operations ceased at Mulobezi around 1972, whilst operation of the line to Livingstone was taken over by Zambia Railways in 1973.

In 1976 the National Monuments Commission declared the ZSR site a National Monument, and it subsequently became a railway museum, which was opened officially on 12 June 1987 by the then Zambian President Dr. David Kenneth Kaunda.

NOTE: Curiously in 2012 the Mulobezi Train was still operational - as a life line to the locals living along the old rail track - it ran once a week under a government concession - using diesel power and running at a maximum speed of 15km/h - taking 2 days to go the full distance. More details in a Times of Zambia article may be found at the bottom of this blog page.


In 2013 it was reported that the government railways has taken back control of the line. Apparently operations came to a full halt during 2013, but ZRL (Zambian Railways Limited) plans to resume operations in the 1st quarter of 2014. 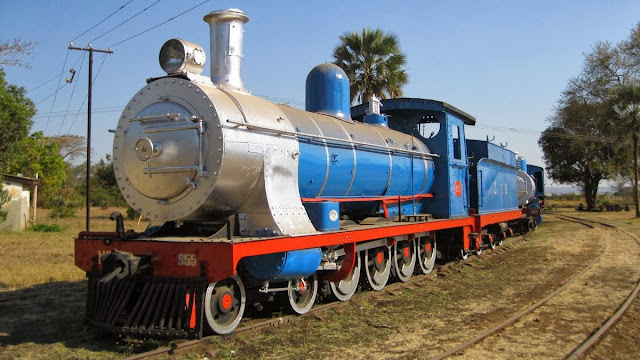 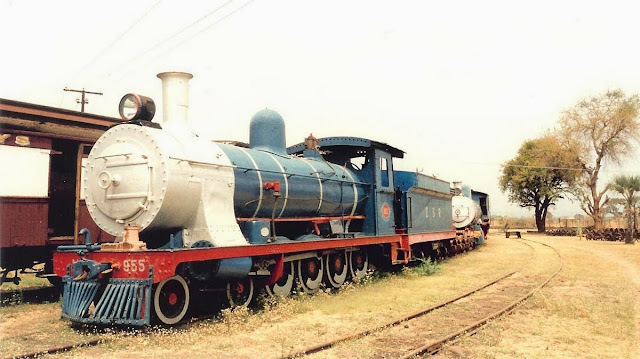 While most of the Class 7 locomotives remained at Mulobezi out of use, SAR number 955 is now preserved at the Railway Museum in Livingstone. 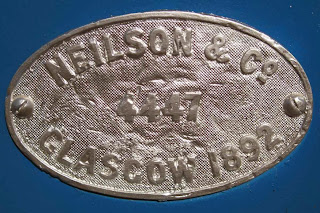 Built in 1892 by Neilson and Co. for the Cape Government Railways (CGR), it is now the oldest steam locomotive still in existence in Zambia.

Noteworthy is that one of ZSR's locomotives - ex-SAR Class 7A no 993 - may now be seen in excellent preserved state in the Locomotion - National Railway Museum, Shildon (UK). In 1974, renowned wildlife artist and conservationist David Shepherd donated a helicopter to Zambia to help the local population hunt for poachers. In return, the President of Zambia Dr Kenneth Kaunda donated the locomotive to David Shepherd. Mr Shepherd brought the locomotive back to the UK in 1975, and the engine was displayed at Whipsnade Zoo, then East Somerset Railway, and then the British Empire and Commonwealth Museum, before being transferred to the National Railway Museum. 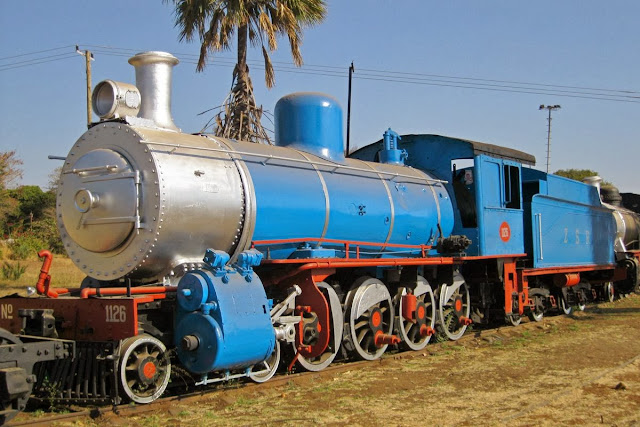 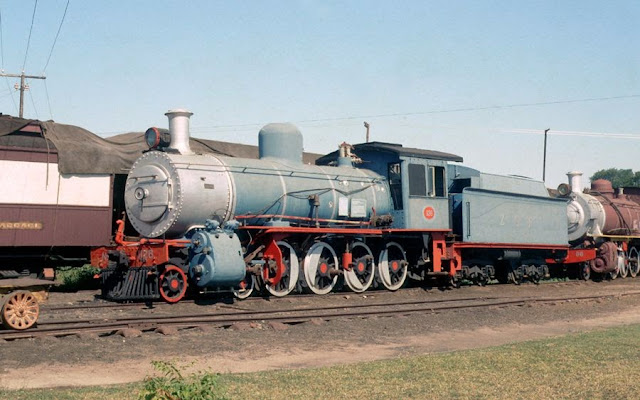 ex-SAR Class 8A no 1126 was employed at Mulobezi after logging operations had ceased and ZR had taken over the main line. She was used at Mulobezi to shunt fire wood and works trains. She returned to Livingstone in December 1975 and eventually, in June 1983, went on display at the Railway Museum at Livingstone.

Geoffs Trains image set of a 1994 trip along the Zambezi Sawmills Railway route ("Between 1986 and 1999 I owned and ran a tourist train in Zimbabwe under the company name Rail Safaris. Each year I ran at least one steam enthusiast tour, and in 1994 it was decided to try to reach Mulobezi, the terminus of the Zambezi Sawmills Railway. We planned to make the trip three times are fortnightly intervals. The first trip ran out of water 96.5 km from the junction at Livingstone. The second trip did not get past Livingstone because the steam locomotive had not been recovered. The third trip made it to Mulobezi, and back again just 38 hours late. A feat that was never to be repeated - that would have been a risk too far!")

A Trip on the Zambezi Sawmills Railway, 2006 (report by Dietmar Fiedel)

Livingstone Railway Museum, Zambia 2011 (Elmar Pfannerstall was here in July 2011. Some of the data quoted comes almost verbatim from 'on site' labels.) 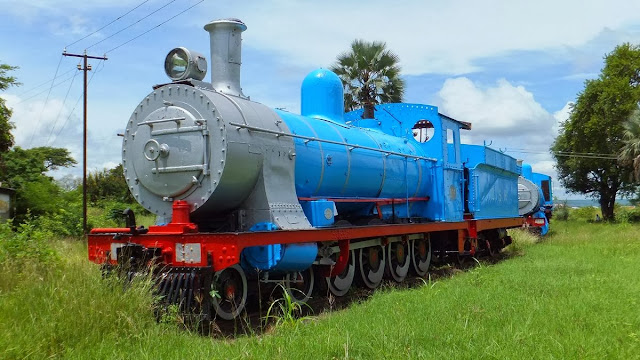 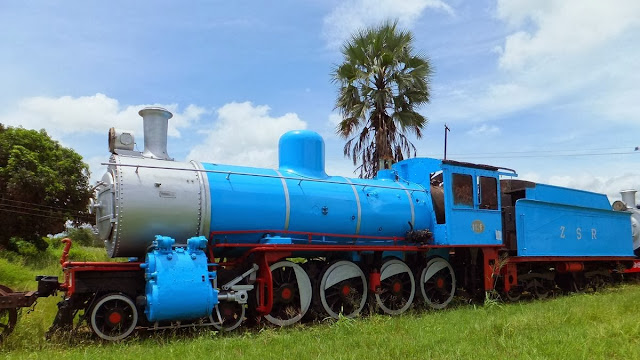 Running nbr: 708 (The Museum gives the running number as 70)
Built: Beyer Peacock
Works nbr: 7693
Date: 1954
Arrgt: 4-6-4 + 4-6-4
Livery: Black + Silver smokebox
Orig owner: Rhodesia Railways. Intended for Wankie and Kabwe coal trains.
Present owner: Zambia Railways (on loan to museum).
Notes: At 233 tons, this was the heaviest Rhodesia Railways loco. In 1967 (following independence) this was one of the locomotives assigned to Zambia. Withdrawn in the late 1970s when diesels were introduced.

ZAMBIA Railways Limited (ZRL) has repossessed Mulobezi Railway from the concessionaire to rehabilitate it and ensure it becomes an integral part of the firm.

ZRL chief executive officer Muyenga Atanga said the railway line has been neglected for a very long time and is in bad shape.

“We have taken over the running of Mulobezi Railway this month and we are taking four new coaches to ensure passengers are well served and comfortable,” he said.

Prof.Atanga said this at a press briefing in Lusaka on Thursday last week.

He said there is need to rehabilitate the line and the rolling stock so that it can meet the aspiration of the customers’ needs.
Meanwhile, Prof Atanga said the money from the Eurobond is strictly for rehabilitation of the tracks and locomotives.

“The issue of the Eurobond has been controversial, I want people to understand that whenever you see a train moving it means that ZRL is generating revenue which will be used to manage the operations of the railway line,” he said.

He said the company’s focus is to move six trains a day to increase revenue to provide for the line’s expenses such as salaries, spares and day to day running among others.

He said out of all the cargo on the market, 85 percent is on the road while ZRL only handles a bit although he was quick to point out that  plans to increase the customer base is underway.

Prof Atanga, however, said the company’s focus is to increase cargo traffic by 50 percent after the rehabilitation of the tracks.

Government has pumped US$125 million into the operations of ZRL. The national railway firm needs to ensure that locomotives and trains are moving and that its track feeds into the TAZARA network.
Posted by Piet Conradie (for e-mail addr: see profile plse) at 5:02 PM