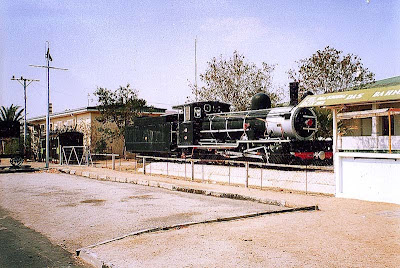 2’0” gauge Class Hd/NG5 2-8-2 #40 Henschel works number 10720 built in 1912 plinthed in front of the Usakos station building. The station building has since been demolished by run away trucks. 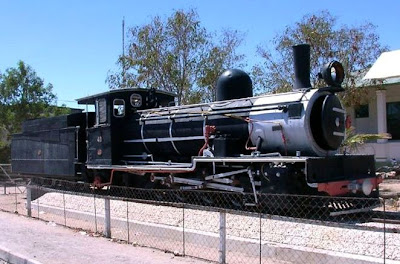 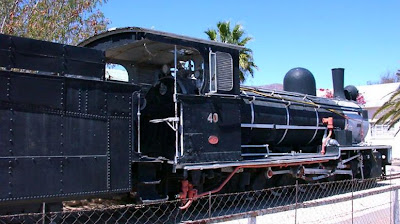 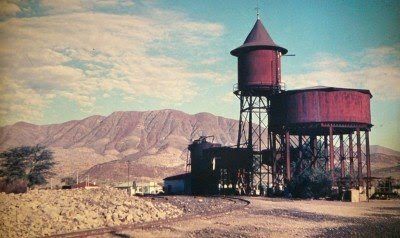 Photo taken in 1960 by Hennie Conradie
In 1960, after the Usakos-Karabib-Tsumeb-Grootfontein line's narrow gauge was broadend from 2 feet to 3 feet 6 inches, all of the railway system in South West Africa was dieselised. Up to that time steam traction was used, and before 1960 many a steam locomotive, including the old Henschel #40 shown here, would have quenched its thirst with an ample load of water from these historic water tank towers at the Usakos railway yards. 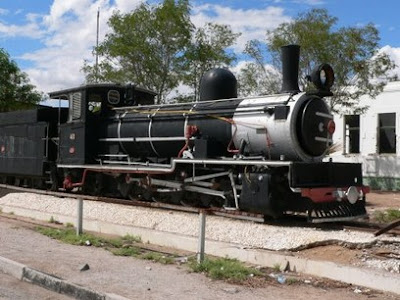 This plinthed narrow-gauge loco was photographed by Louis around 2005 at the station in Usakos, Namibia. Numbered #40 (also #SW40 to prevent confusion with SAR numbering) this loco had 2 sisters numbered 41 & 42 - together they made up class Hd. These locos retained their numbers under SAR administration, and were withdrawn in 1960 when the narrow gauge was converted to standard Cape gauge.
Sister locomotive #41 is plinthed at Otjiwarongo station further to the north. 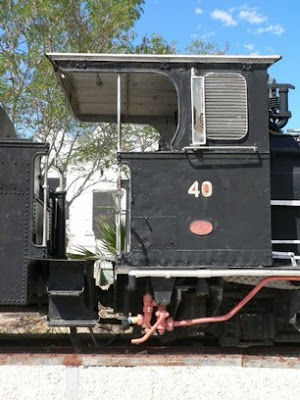 Like many other SWA locos they had dust covers to protect the motion. The carrying wheels were arranged as radial axles. As there were no separate boogie truck, the axle boxes were guided in such a way that the wheels could move radially with respect to the frame. 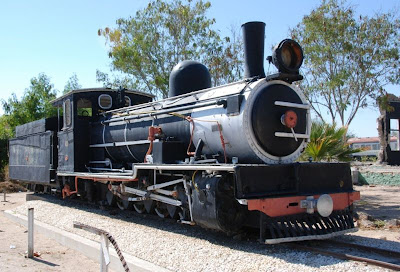 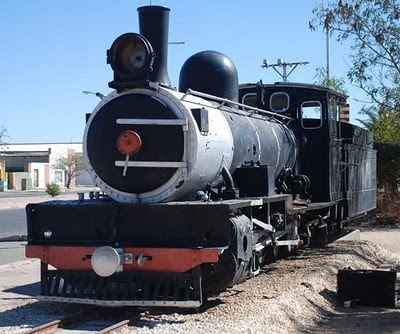 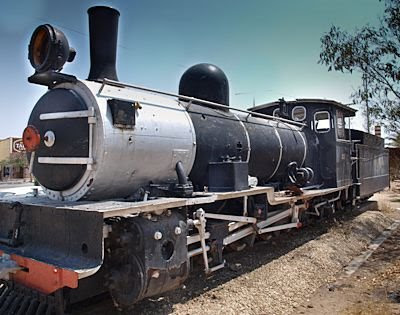 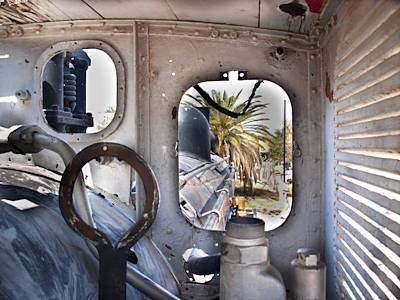 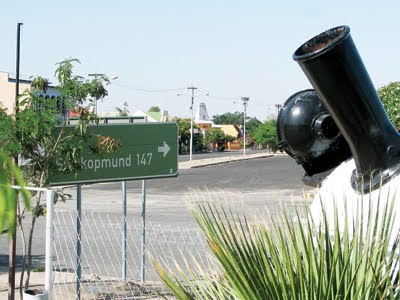 What is this??? Photo: Algemeine Zeitung 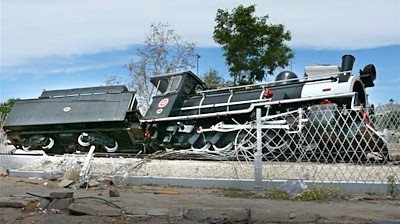 These dramatic pictures show the poor little workhorse after an accident that was none of its own making. On 17 Dec 2008, around mid-night, a run-away truck hit the locomotive where it was plinthed in Usakos town at the far side of a T-junction in the road. 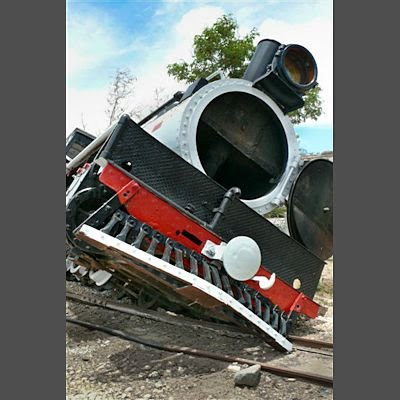 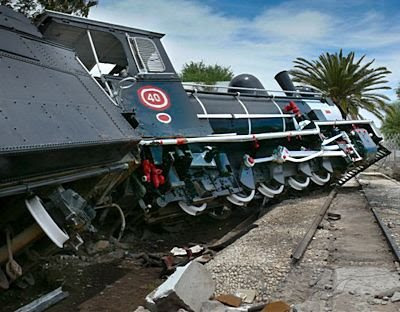 Note how narrow the narrow gauge is indeed! (600mm or 24 inches) 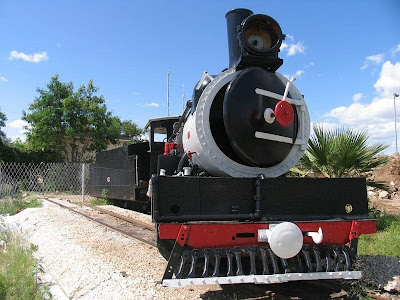 We were very happy to learn that by March 2009 when this picture was taken, the little workhorse was on its feet again, albeit not properly on the rails yet. Hopefully there are plans to move her on her plinth again! In the old days (up to 1960) there was plenty of expertise on Usakos to tackle a little task like this, alas, that was 50 years ago now! 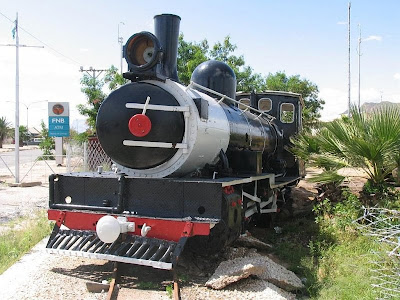 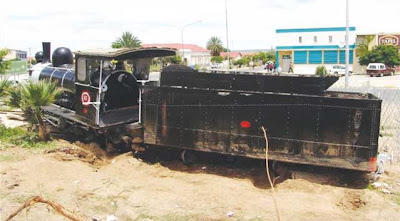 This picture of the uprighted loco appeared in the Namibian 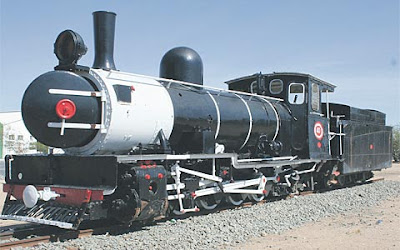 In the REPUBLIKEIN newspaper of 24.02.2010, this picture appeared of the loco on its new plinth, at a safer location elsewhere in Usakos.

The locomotive is still plinthed in the vicinity of the railway lines - visible in the background. The unfortunate damage done as result of the accidents shows in these pictures. 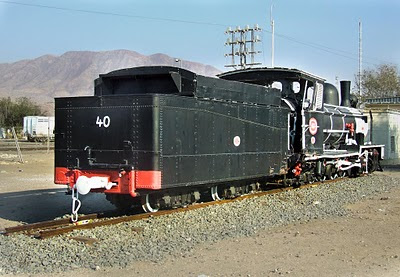 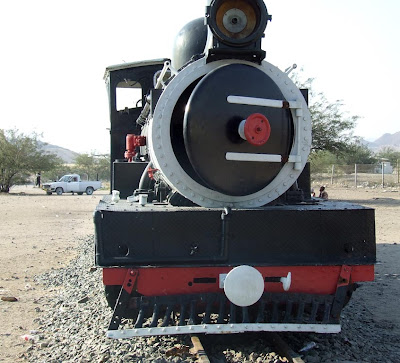 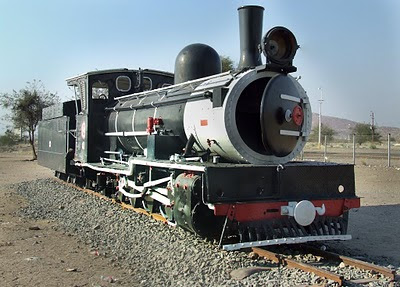 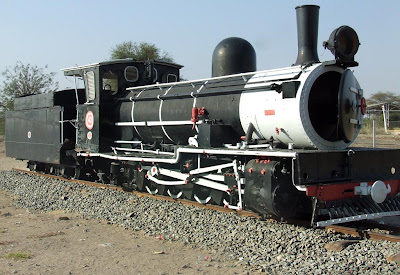 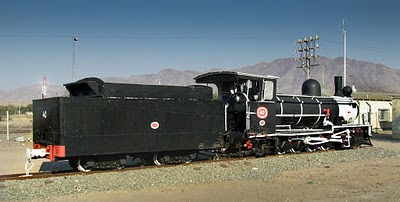 The previous 5 pictures were taken on 3 September 2010, and kindly supplied by Konrad Schüllenbach, curator of the TransNamib Museum in Windhoek.

Posted by Piet Conradie (for e-mail addr: see profile plse) at 9:49 AM