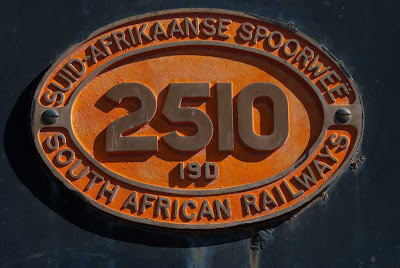 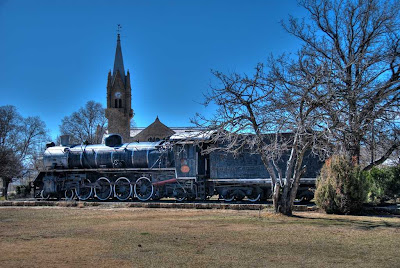 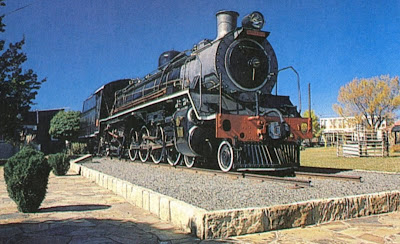 Shortly after this locomotive was plinthed in 1980 in Barkly East, this image was photgraphed by Brain Johnson-Barker, and subsequently published on page 212 of the 1987 AA publication titled OFF THE BEATEN TRACK.

We visited the town of Barkly East on a fine day in 2009. All these photos were taken on August, 28th. 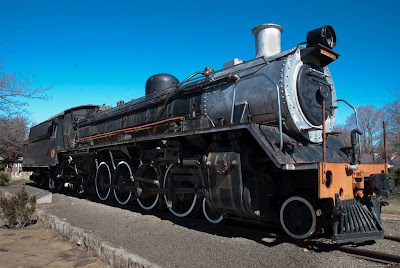 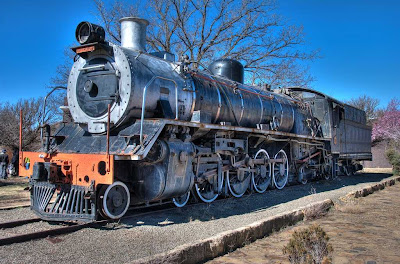 After being on the plinth for some 30 years, since 1980, the locomotive is in a surprisingly good condition. One of the reasons being that it is protected from vandalism within a fairly high fenced-in area which surrounds the municipality building in Barkly East, and which is locked-up after office hours. So should you wish to get a closer look at the locomotive, it would be best to visit during municipality office hours. 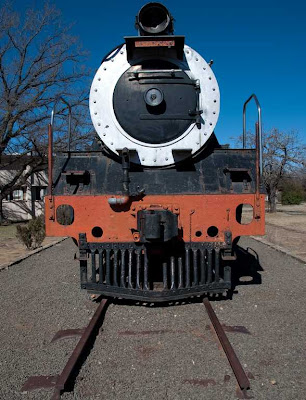 This locomotive built by Krupp (Friedrich Krupp Maschinenfabriken, Essen, Germany) as works no 1622 in 1937. 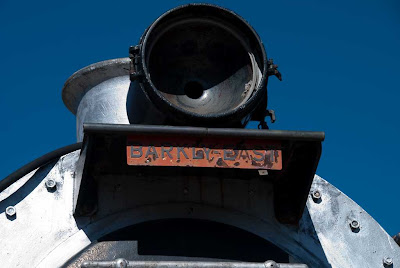 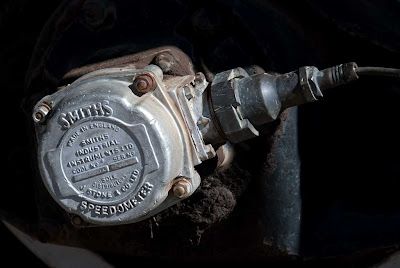 click on the image for a higher resolution image 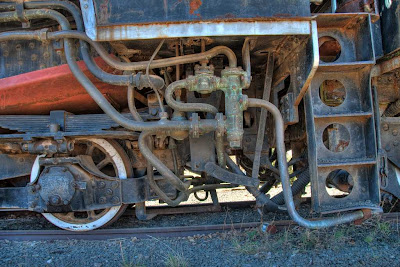 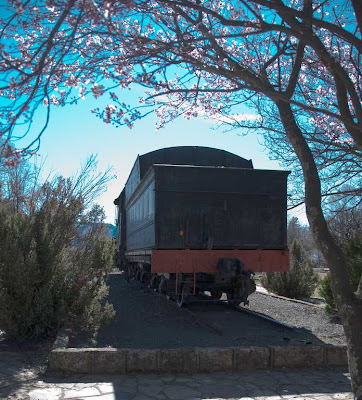 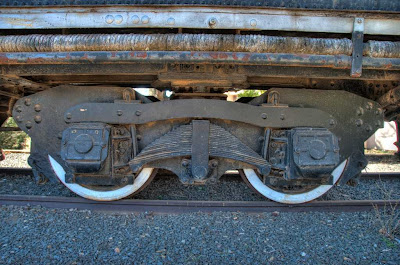 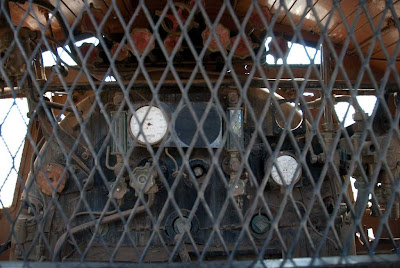 Most of the copper and brass was still intact. 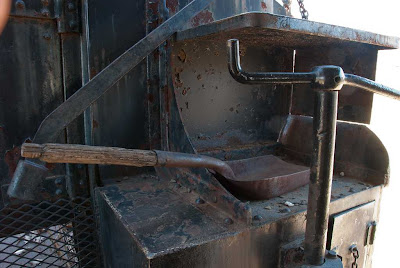 well used tools, including the brake. 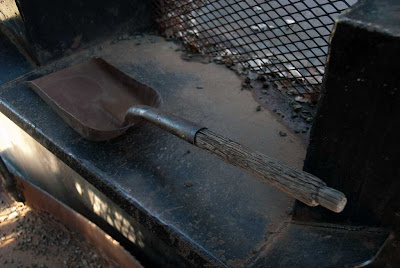 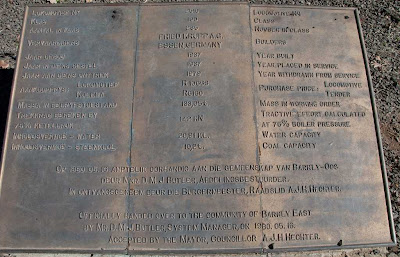 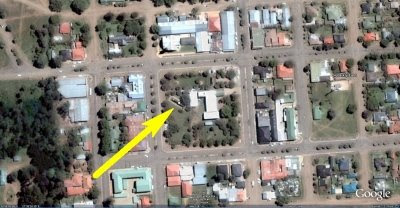 It is plinthed in the town centre of Barkly East as shown by this Feb 2008 Google Earth view.

Barkly East, one of the highest and coldest town in South Africa, was once served by a railway branch line from Aliwal North via Lady Grey ending at Barkly East. One of the unusual features of the line was the reverse track railway pass.

See the "ZigZag Line" below.


The original source of the following relevant material found here on the web could not be established:

A branch railway, running east from Aliwal North to Barkly East, traverses spectacular scenery as it cuts through the folds of the Southern Cape Drakensberg of South Africa.

For many years trains literally zig-zaged, backwards and forwards, negotiating steep grades as they crossed mountains and valleys. Grades of 1 in 35 are quite common, there are several sections of 1 in 36, and some as steep as 1 in 30.

The difficult nature of this terrain must have been a challenge for engineers back in 1902, a challenge they overcame with the construction of eight reverses, (switchbacks, or reverse track systems), and the last section of line was opened in December 1930.

The original survey for the section between Melk and Motkop called for the line to follow the contour of a mountainside to where it would bridge a valley, over 90m above the river bed, and enter a tunnel on the far side. The entire formation was constructed, including the tunnel, but the bridge was never built as traffic levels never justified this expense.

Shortly after its delivery in 1924 a diminutive G.B. Garratt, assigned to this branch, proved its suitability. In 1964 there were seven Garratts operating on the line, but it was G.B. Garratt No 2166 that was proclaimed master of the line, a role held for more than 40 years.

Today weeds grow between the tracks and there are no sounds of an approaching train. In a cliff high above a gurgling river a tunnel entrance can be seen, a tunnel completed in 1911, never used.

In an article published in the Rhodesia Railways Magazine of October 1964, F.C. Butcher wrote:

Ringed by mountains, we soon ground to a halt at Melk, the first reverse, where the guard turned the points, and the train was pushed up backwards climbing the 1 in 36 and 1 in 40 gradients in a cloud of smoke.

Below, and to the right, the fourth reverse came into sight, and this we eventually reached after dropping down through the second and third ‘switchbacks’ if one might use the term. The points are turned by the fireman and guard alternatively at these reverses and standing time is almost nil.

In the red-brown cliffs that overhang the fourth reverse, the entrance to a tunnel can be seen but it has never been put to use. It was intended at one time to eliminate most of the reverses by keeping the track at a high level, bridging a deep gorge, and passing through the mountain, emerging where the sixth reverse is at present situated.

I have walked through this tunnel, and watched a toy-like train down in the valley. Scenically, had this plan been put into effect, this would have been a most dramatic section of track as the train would have crossed a bridge hundreds of feet above the floor of the gorge, then gone straight into the tunnel, and emerged into a land of huge tumbled rocks.

Leaving the fourth reverse the engine is put into the climb with terrific vigour as the gradient between the fourth and fifth reverses is a sustained 1 in 30 and the curvature in places exceptionally severe. The line rises rapidly from the valley floor and is cut out of the side of another gorge with a stream rushing below. It is a truly magnificent sight.

For briskness in railway manoeuvring this performance of swinging the points at the reverses is hard to beat, and the rest of the journey seems almost an anti-climax along a bleak, windy tableland over 6,000 feet above sea level, the summit being crossed at Drizzly, and then into the seventh and eighth reverses.
Posted by Piet Conradie (for e-mail addr: see profile plse) at 11:00 AM