.
This entry tells the very sad story of a once shiny "ROSIE", who is presently referred to as "RUSTY ROSIE".

On 30 Dec 2009 Jon Stanley from Berowra Heights in NSW Australia wrote: "I can shed a bit of light on the use of Class 12R Rosie as Germiston station pilot. She was used from about 1974 to 1981 or 1982 when she was replaced by 12AR 1535 Susan. I think 1535 carried the name Rosie for a while before becoming Susan. (This explains why the plinthed loco at first had the new name "Vicky" - Piet) Before 1974 an S2 no 3789 (I think) was used on this duty. The station pilot was always kept in immaculate condition. PS: I stumbled across your website while browsing today - it brought back many happy memories although it is sad to see the state of many of the relics of the steam era."

In the 1980's she was plinthed next to the Loco Shed in Germiston. 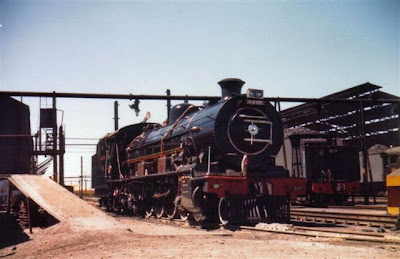 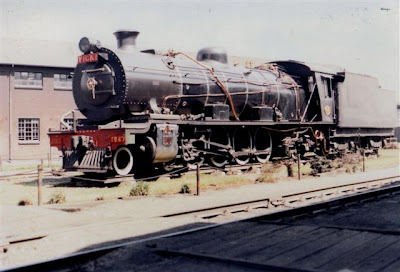 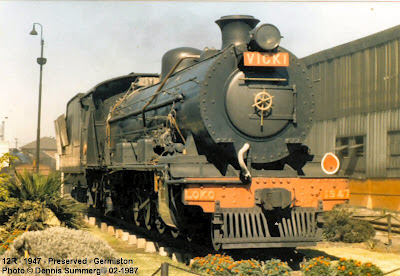 The Class 12 locomotive was the first South African Railways design. It was designed as a 4-8-2 goods engine by Mr D.A. Hendrie, who was the SAR's first Chief Mechanical Engineer. The Class 12 was built by the North British Locomotive Company, and was placed into service between 1912 and 1922.

The original Class 12 was intended for heavy coal traffic on the Germiston-Witbank run, and spent most of their first years on this section before posted to other centres in South Africa. Thet were also used around Ladysmith in Natal. As these locomotives required new boilers, they were given the standard No 2 boiler, and reclassified Class 12R.

In 1920 an additional 30 locomotives to the Class 12 design were delivered from Baldwin. Because their leading bogie had a longer wheel base, it was decided to classify them as Class 12B. When they were rebuilt with the standard No 2 boiler, the opportunity was taken to reclassify them as Class 12R too. Obviously engine no 1947 belonged to this batch.

There Baldwin locomotives were placed in service on the Cape Midland working on the main line out of Port Elizabeth where they largely remained until withdrawn in 1982.


1996 photo courtesy Richard Niven who noted: "Dumped on a plinth and slowly being stripped by thieves."


Oct 1998 photo courtesy Richard Niven. By this time the Germiston shed had become derelict, the picture tells it all, and the demise of 12AR #1947 was complete. 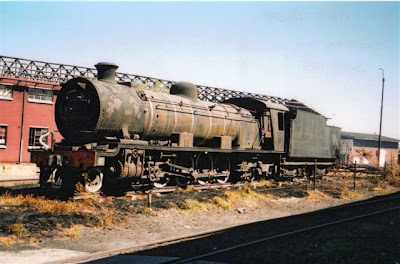 March 2003 photo courtesy Richard Niven against the background of the stripped shed. Little but the hulk of the once proud locomotive remained.

Eventually Reefsteamers came to the locomotive's rescue, and moved her to their premises. 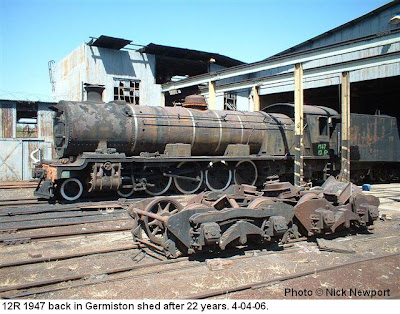 #1947 stood for about 2 years in this position at the Reefsteamers shed, was then, in early 2008, moved into the shed, to keep her deterioration in check while awaiting restoration. 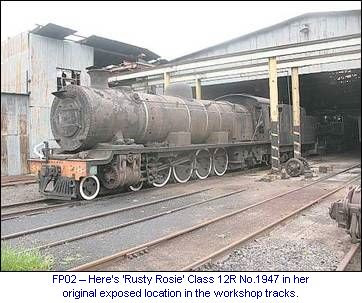 These pictures appear with the Reefsteamer newsletter which you can read here. 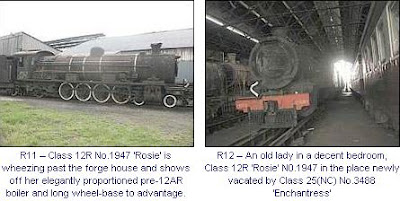 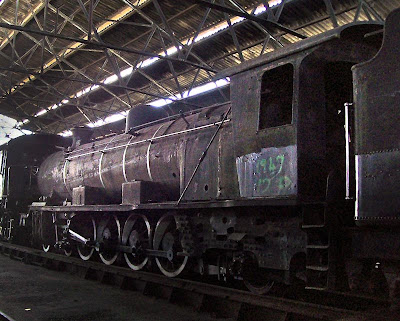 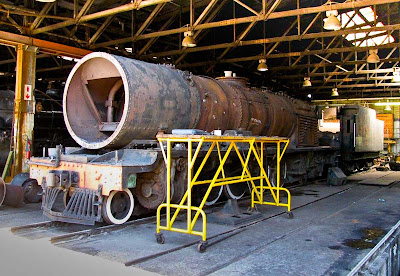 May 2010: 12AR #1947 has been stripped down for restoration by ReefSteamers. Photo: kind courtesy Derek Walker.

The following is an excerpt from Twilight of South African Steam - by AE Durant - David & Charles 1989:

"The Class 12 built new for SAR, was the logical development of the Hendrie class 3B, and had the same features, but enlarged throughout. The class 12B was almost identical, but had a slightly longer bogie wheelbase; they were built by Baldwin in America, plate frames and all! When rebuilt with Watson standard boilers, this minor difference was ignored, and in latter years all locomotives were class 12R."

"During the relevant period (from 1973 to 1989) they (the Class 12R) were allocated to three systems, and used almost entirely on shunting duties. Those on the Cape Midland were stationed at Sydenham, Port Elizabeth, for shunting in the docks and in New Brighton marshaling yard, plus much trip working in the area. Right at the end, No 1505 was put into good fettle for an enthusiasts’ special, and thereafter kept for such duties. Until the Uitenhage suburban trains were dieselised, it had a nice little job on a single out-and-back suburban run to Uitenhage."

"Those in the Orange Free State were at Bloem­fontein and Bethlehem, entirely for shunting, while the large contingent in the Western Transvaal were mainly at Germiston and Springs, plus one or two at Krugersdorp, again mainly for shunting. For several years one Germiston locomotive was kept in immaculate condition as a passenger station pilot, and was a familiar sight to regular travellers." [Derek Walker suggests: "It is possible that the pilot loco was "Susan", (1535 12AR) - she was the pilot Loco at Germiston too, that's where I got to know her in 1985/1986]

"The Springs locomotives were the most widely traveled, and were often used on local goods work on the branch to Nigel and Heidelberg, plus other trip workings in the East Rand area. Additionally, some were sub-shedded to Saaiwater and Vandyks­drift in the Witbank coalfield, and frequently ran along the electrified main line with short loads to and from the home shed at Springs, where washouts took place."

"It was in 1974, when Hendrina power station experienced some sort of failure in the middle of midwinter peak demand, that coal had to be urgently transferred from Hendrina to other power stations, using the shunters from Vandyks­drift. At the time these were classes 12R, 12A and 12AR, which for their last time engaged in the coal haulage for which they were designed."

"In 1980, during a peak in Zambia’s perpetual motive power crisis, ten 12Rs were hired to ZR (see Chapter 4), but were soon returned to SAR. Surpris­ingly few 12Rs found their way into industrial service, despite their evident suitability, this being largely a matter of becoming available at times when the industrial market was already saturated with other often less suitable locomotives."

Preservation. At present (1989), No 1505 locomotive has been put aside for preservation.
Industrial. The following 12Rs have been sold into industrial service:

Source:
Posted by Piet Conradie (for e-mail addr: see profile plse) at 11:17 AM