NOTE: This page should be read collectively together with the other Sugar Cane tramway pages on this blog as general information is scattered across the different pages:
_____________________________________
This plinthed locomotive may be found outside the offices of the Gledhow Surgar Mill, located just south of the town Stanger, on the KwaZulu-Natal North Coast.

Unless indicated otherwise, all photos of the plinthed loco and the "Tamar" copies are kind courtesy of Johan Pretorius. These photos were taken in 2005 or earlier. 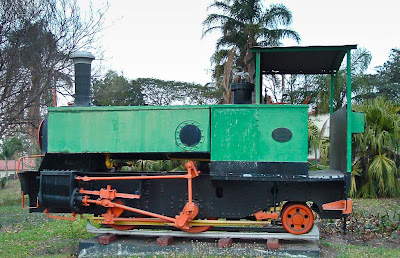 Over time the engine has lost its 2 sandboxes on top of the water tanks ... compare catalog picture below. 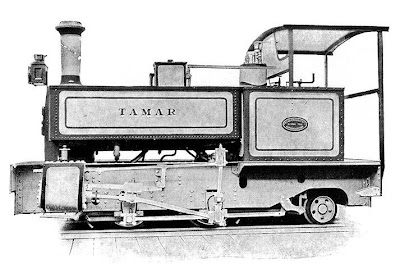 This locomotive plinthed at the Gledhow Sugar Mill, was built by Hunslet Engine Company in 1942, according to the "TAMAR" design made by Kerr Stuart before the company went bankrupt. Kerr Stuart were known for producing a number of standard designs, with many engines being built for stock, and sold 'off the shelf' to customers. The names of these locomotive types were often derived from the purchaser of the first of that type, or from the name it was given.

Kerr Stuart went bankrupt in 1930 in the shadow of the great slump, and at the time Hunslet Engine Company acquired the goodwill, manufacturing rights, patterns, drawings and press blocks - the Kerr Stuart plant and machinery were dismantled and sold piecemeal by auction. 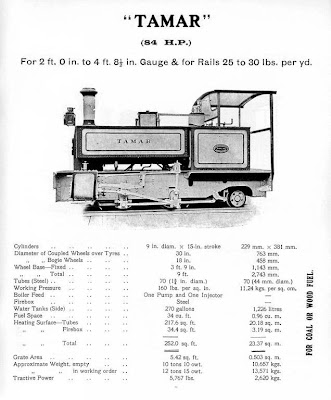 For specification details click on this image to enlarge.

Built for 2 foot gauge sugar plantation railway, this was one of the last Kerr Stuart designs ever done. 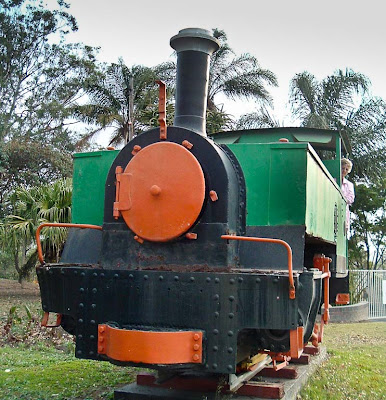 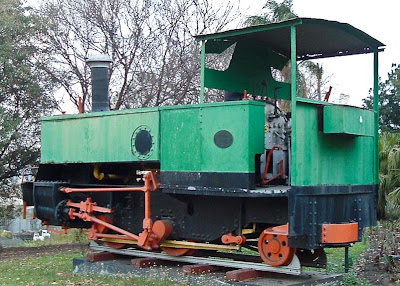 The Gledhow mill, originally part of the Gledhow-Chakaskraal estate, had an extensive narrow gauge system, which was closed in 1963. It is therefore natural to assume that this plinthed locomotive did service on these tramways, but this needs confirmation. 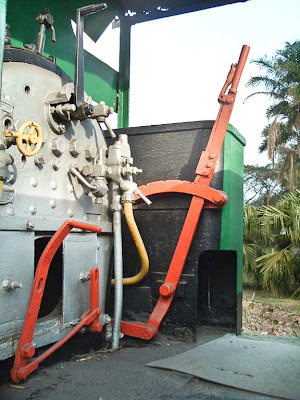 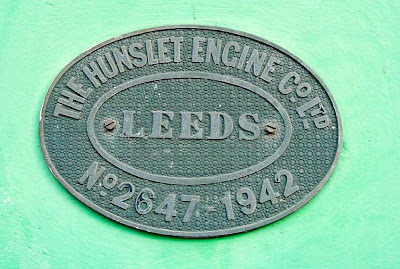 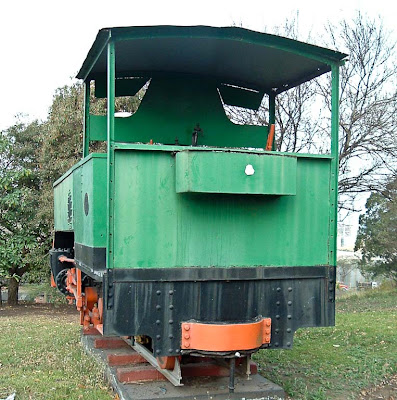 The narrow gauge loco is preserved outside the mill offices.

A 7 1/4 inch scale model of the TAMAR class. The following photos were found on the webpages of the Keirunga Park Railway.

John has named his loco "Beau Sejour Sugar Estate", which means "good stay". The "Beau Séjour Sugar Estate" was located on Mauritius -- and had one of the 59 Sugar Factories listed for the island in a publication of 1912. 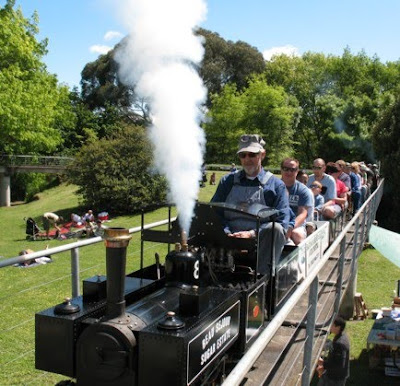 It was Beau Sejour Sugar Estate's second outing at Keirunga Park Railway at Labour Weekend 2009, and John said the loco was "superb, not a problem". 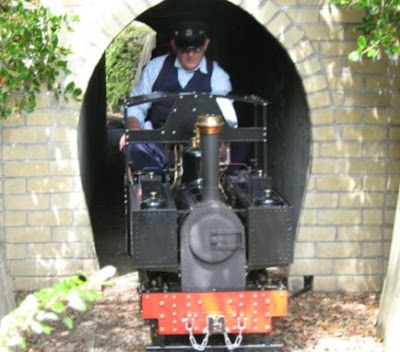 The loco is one-third full size (2 foot gauge) and was built from outline drawings, pictures and photos, not real plans, as there are none. 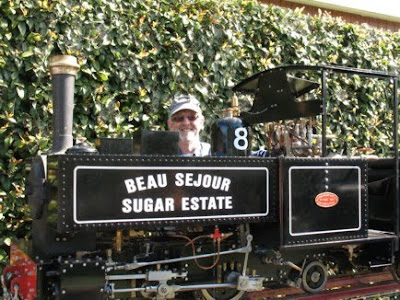 The loco has a steel boiler, 65 mm cylinder bore with 104 mm stroke, and wheel diameter of 10 inches. It is John's 8th loco, and he says his final loco will be a B-Class Sharp.

as published in the INDUSTRIAL RAILWAY RECORD of September 1966

I liked Mount Edgecombe. You approached it along tree-lined roads, bumping over unprotected road crossings with a glimpse, if you were lucky, of a trail of steam drifting across the canefields to the accompaniment of a clatter of cane trucks and the whistle of a locomotive. But now it has all gone. No more bustle of activity outside a shed built to hold eight steam locomotives. No more grinning Indians riding the footplate up and around the endless curves and gradients, or sitting on the buffer beam feeding sand to the skidding wheels. For Natal Estates Ltd. has followed The Tongaat Sugar Company Ltd. into the abandonment of its 120 miles of "main line" 2 ft. gauge track and will instead fill the country roads with heavily-laden lorries of cane.

An era of rail transport is passing. South African sugar firms are trimming costs in an effort to win more markets, and gradually the once-numerous rail systems are disappearing. integration of the various companies progresses, and Natal Estates Ltd. is controlled by Sir J.L. Hulett & Sons Ltd. in the biggest group in the South African sugar industry. Paradoxically, Hulett’s itself controlled by a consortium of other sugar companies, and few firms remain entirely independent.

Sugar was first produced in South Africa in 1851, since when its cultivation has spread to be the main crop of a 250 mile stretch of coastal land in Natal centred on the port of Durban. Over the years millions of pounds have gone into rail equipment, and many more million tons of cane have been moved over the rails. In the 1962/63 cane milling season over ten million tons of cane were handled, a fair proportion of which came from the factories’ own fields over the cane tramways. Some systems are entirely diesel, but both Tongaat and Natal Estates kept their steam, though the latter had many small diesels for shunting. As elsewhere lack of modernisation has led to replacement.

Mount Edgecombe is twelve miles north of Durban, and almost four miles inland. From the factory its rail system spreads like an octopus’s tentacles, but mainly in the coastal direction running around the hills almost to the sea. At least five steam locomotives from their stock of four Fowlers, two Hunslets and two Bagnalls were kept busy on the main lines of the system, while manpower and oxen hauled trucks over temporary tracks in the fields. One or two diesels shunted the not inconsiderable yard at the mill and several others languished outside their own small shed. The engines were an interesting bunch even though the examples of Avonside 0−4−4−0 geared and 0−4−0 side tank sugar designs formerly owned had been scrapped for some time, and Bagnall had not succeeded in selling any articulated type to the company. The speciality, of course, was the Fowler 0−4−2 side tanks, the only examples in South Africa.

With commodious spark arresters and bedecked with baskets of sand they gave a chunky but workmanlike appearance, and did at least their share of the work. The Bagnalls were a dainty 4−4−0T and a big, long 2−6−2T of post-war build. The Hunslets, when I saw them, were both 0−6−2T‘s of typical solid Hunslet design, but one then undergoing repair was in fact reported to have a leading bogie, making it a 2−6−2T when complete.

All in all Mount Edgecombe was one of those places where one promised to return soon with a cine camera. But it’s too late now.