NOTE: This page should be read collectively together with the other Sugar Cane tramway pages on this blog as general information is scattered across the different pages:
_____________________________________
In the November 1962 issue of the Industrial Railway Record, Anthony H Spit summarized the sugar tramway scene in Natal as follows: "The sugar plantations use a weird and wonderful collection of motive power including 0−4−0 side tanks, geared locomotives, 0–4–4–0 Mallets, and hefty-looking 2−6−2 and 0−6−2 tanks of Bagnall and Hunslet manufacture. One plantation depends entirely on a batch of 4−4−0 tanks. On the diesel side there are on this gauge (2'0") a considerable number of four- and six-coupled types of British and German manufacture, some double-bogie machines, and also a solitary triple-bogie articulated. "

"MR BUSS" is the name of Avonside 0-4-0T 2ft 0in gauge locomotive with works no 1740 built in 1916 which is plinthed in front of the offices at the Darnall Sugar Mill in Darnall, just north of Stanger, on the North Coast of KwaZulu-Natal.

The locomotive saw service at the De Jagers Estate, Umhlali, which was under control of Huletts. The tramways there closed in 1967. 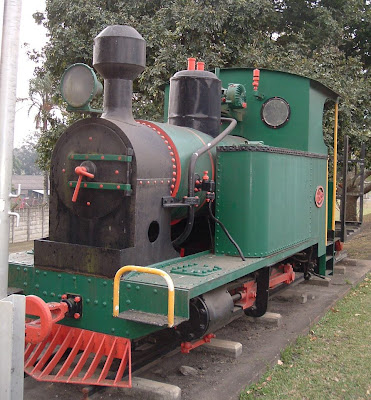 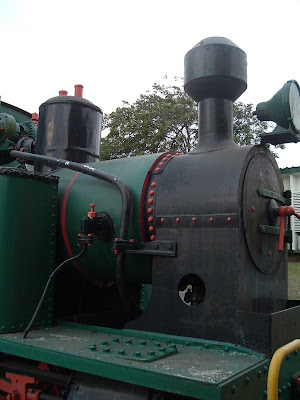 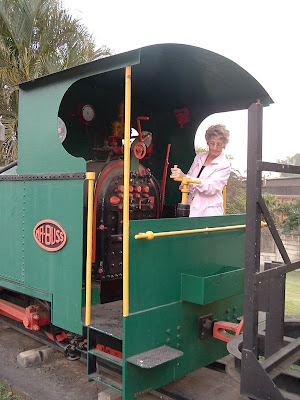 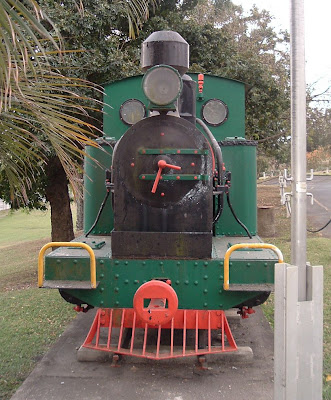 Also, at least in December 1985, another Avonside engine was plinthed at the sports club of the Darnall Sugar Mill. 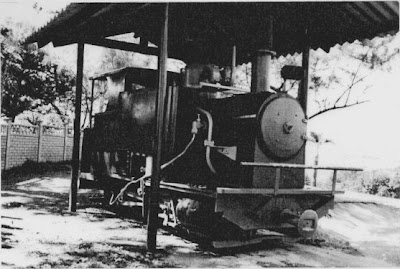 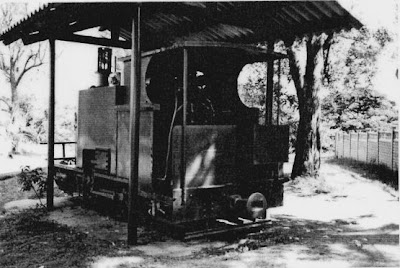 Some historical background about the Avonside Engine Company may be found here elsewhere on this blog.

The village of Darnall, inland from Zinkwazi, takes its name from the prospector, David Brown, who was one of the first settlers in this district. He was the son of an eminent botanist, Robert Brown, who was awarded the Copley Medal by the Royal Botanical Society in London in 1839.

David Brown named his farm “Darnall” after his home town in Yorkshire, England. He built his homestead high on a ridge, where the Darnall Country Club now stands. He married and had four children, Jessie, James, David Jr and Agnes.

When sugar cane arrived from Mauritius and the sugar industry got under-way, from the mid 1840’s, Mr Brown was one of the first to introduce it to the Natal north coast. He set up a sugar mill in 1904, but his milling ventures were not a success financially and Mr Liege Hulett from Kearsney, took over the Darnall mill in 1906. However, Mr Brown did manage to bring a significant change to Zululand, which resulted in the railway line being extended through Darnall to the Tugela being completed.

On one of his trips to Zululand, Brown came across an outcrop of Anthracite, which he told Liege Hulett about. A diamond drill was set up the test the extent of the discovery and as a result, Brown, Hulett and Arthur Reynolds founded a syndicate and on the 8th April 1893, they applied for a lease of this area and a concession to construct a railway line from the TugelaRiver to the mine.

This 50 year concession was granted to them on the 11th August 1894, the line was to be completed by 1903. The last stage of the railway construction from Stanger to the Tugela River, through Darnall, was opened on the 1st December 1898. The first electric unit came in December 1969. However, it was only in July 1940, the Darnall became a village with its own Health Committee.

A bit of SUGAR plantation history
In 1846 Mr. Edmond Morewood was granted a large farm near Umhlali, which he called "Compensation", where he practiced the first commercial sugar cane growing.

He was inspired by a visit to the islands off South Africa's East Coast, (Mauritius, Reunion etc.) There he had been introduced to sugar cane growing and the sugar industry there. He had seed cane shipped back to Natal, which he planted. He built a small mill there, using the masts of a sailing ship wrecked off Compensation Beach (now Ballito), which he cut to lengths to form rollers to squeeze out the juice from the cane. In January 1851 he proudly took his first processed sugar to the Durban market for sale, and is thus acclaimed as the pioneer of the Natal sugar industry.

With his sugar venture under way, and cane growing better than expected, other European immigrants from England and Scotland began to arrive and obtain land between Durban and the Urnhlali river; along the Natal North Coast; Verulam; the Umdloti River Valley; Morelands farms, Tongaat. The development of the sugar industry raced ahead, and soon there were many sugar farms and mills in the area.