NOTE: This page should be read collectively together with the other Sugar Cane tramway pages on this blog as general information is scattered across the different pages:

"Sezela No 1" is the name of an Avonside 0-4-0T 2ft 0in gauge locomotive with works no 1719 built in 1915. It is plinthed, with the "ILLOVO" brand logo on its sides, at the back of the offices of the Sezela Sugar Mill at Sezela on the South Coast of KwaZulu-Natal - about halfway between Durban and Port Shepstone.

This engine has a 8.5" x 12" design. From new it was in the service of Reynolds Bros Ltd, and worked on the Suzela Sugar Estate.

Photos taken by Charlie Lewis in 1959 shows the engine in service on the Nil Desperandum line towards the south of Sezela.

Ordered for the 125-mile railway system that once served the extensive Sezela sugar-cane plantation in Natal, South Africa - 4 similar 0-4-0T (side tank) 2ft gauge locomotives were built in 1915 by Avonside Engine Co Ltd of Bristol, England for Reynolds Brothers to be used on the Sezela Sugar Estate. All the engines had a 8 1/2" X 12" design using Stephenson's link motion.

The sugar tramways of Natal had some 18 systems in operation in their heyday, spread over the north and south coasts. One of these was at Sezela owned by Reynolds Brothers and close to the SAR south coast line. Named after the Sezela River, this 2ft gauge sugar line was extensive - 125 miles in total. The Sezela system was officially closed on 21 February 1970, along with many other sugar lines.

Shaka is said to have given Sezela its name. While encamped there with a group of his warriors on the bank of the Malangeni River – so named after the Zulu clan resident in that region at the time – there was a cagey old crocodile that was believed by all to be an evil spirit. Legend had it that this crocodile could ‘smell out’ its victims no matter where they dared ford the river. Riled by this, Shaka sent out men to track down and kill this crocodile and when they did its Zulu name iSezela – “the one who smells out” – became the name of the river and the region.

Today the community of Sezela centres round a busy sugar mill with its own sweet smell of success. 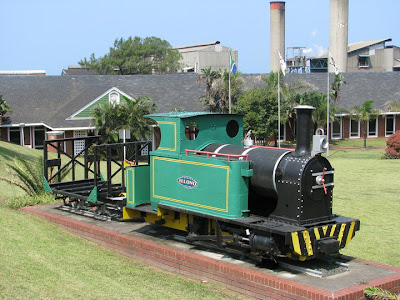 26-03-2010: This photo courtesy of Andre Guelpa shows "Sezela No 1" [Avonside works no 1719 built in 1915] resting on its plinth near the offices of the Suzela Sugar Mill. Note that the engine has retained her original Stephenson's link motion. Her sisters were modified in the early 1960's to use Walschaerts valve gear. 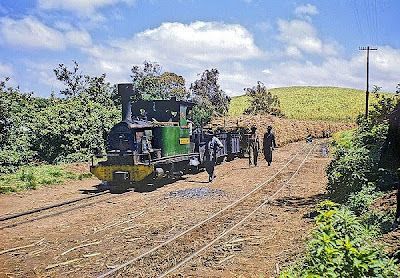 "Sezela No 1" on the Nil Desperandum line in October 1959. This photo was taken by Charlie Lewis and provided by him to the Sandstone Library.

Charlie Lewis, a doyen of the Narrow Gauge sent an e-mail to Sandstone featuring some unique photographs of the Sezela No 1 locomotive working more than 50-years ago. Charlie commented as follows: "These Kodachromes are almost 50 years old ,but they have kept their colours remarkably well. As you can see, it seems a more dignified shade of green. No 3 was identical to No 1, from the same batch of Avonsides built in 1915. Note the original condition of these engines, with Stephenson's link motion, and no balloon stack. This was the last season they ran, before conversion to Walschaerts valve gear. The drivers all complained that the conversions made the engines weaker." 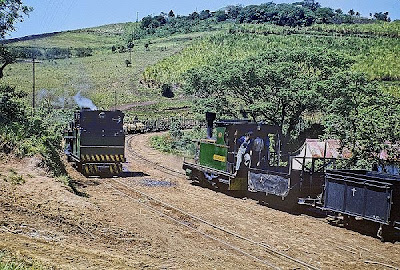 "Sezela No 1" (right) crossing No 8 (left) on the Nil Desperandum line in October 1959. This photo was taken by Charlie Lewis and provided by him to the Sandstone Library.

NOTE about the farm "Nil Desperandum": One of the original 1850 Byrne Settlers from Liverpool and a qualified engineer, John Bazley first camped in a tent alongside the Lovu River in 1852. Later he purchased a 240 hectare estate south of Sezela which he named ‘Nil Desperandum’. There, in the fertile soil, he grew sugar cane, built his own sugar mill and farmed successfully with his seven burly sons. 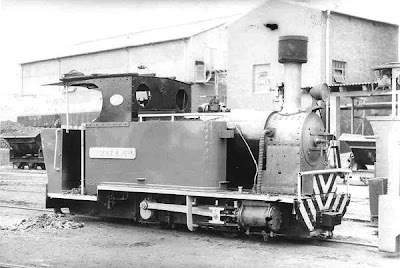 "Sezela No 1" at the Sezela Sugar Mill photographed by the late Eric Angus about the period 1966-68.

Until the mid 1970's cane was transported from fields to factory by an elaborate tramway/railway system. Sezela had the longest tramway system in the industry, covering 200km and using 26 Steam and 12 diesel locomotives. This was gradually replaced by road transport which was more economical and enabled hilly land to be developed. [Jun 1986 source here - DEVELOPMENTS IN SUGAR MANUFACTURE IN SOUTH AFRICA FROM 1959 TO 1984: THE SEZELA FACTORY]


April 1995 photo taken by Martin Murray. At this time the "Sezela No 1" locomotive was plinthed at MIDMAR DAM near Pietermartizburg where the RSSA Natal Narrow Gauge Preservation Group, in conjunction with the Natal Parks Board, in the early 1990's, were in the process of constructing an operational 24 inch gauge railway named the Midmar Steam Railway at the Midmar Historical Village. [Sadly this project collapsed.] 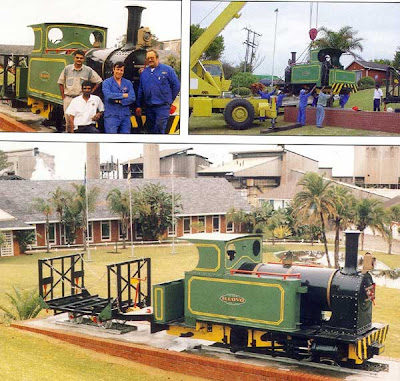 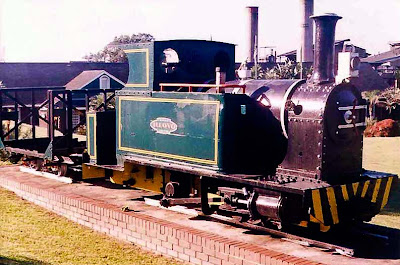 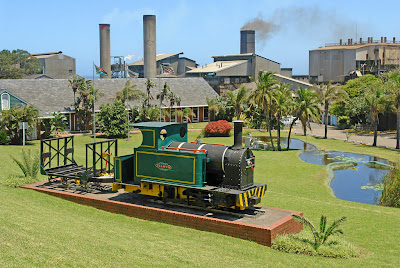 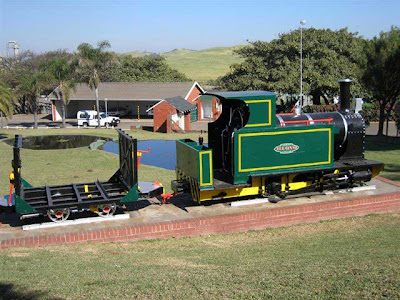 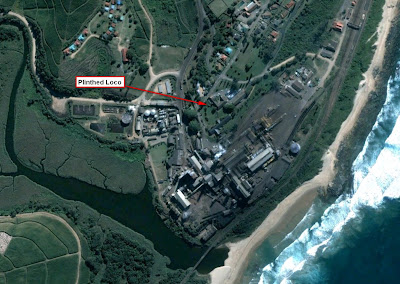 2005 Google Earth View showing the location of the locomotive on display - click on view to enlarge. 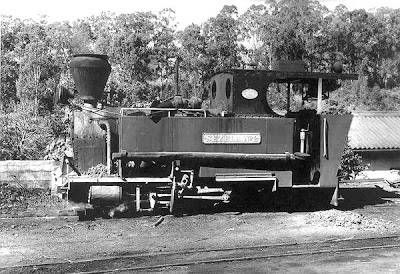 "Sezela No 2" as photographed by the late Eric Angus about the period 1966-68. Standing idle waiting for the next shift's crew to arrive - The wooden pole on its side was used for re-railing in case of a derailment.

Now owned by Great Bush Railway, a private narrow gauge railway running round the edge of Tinker's Park, Hadlow Down, Sussex. [I could not locate any recent photos of this engine.] 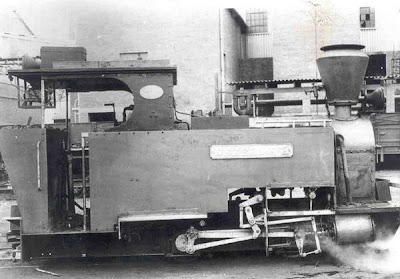 "Sezela No 3" at the Sezela Sugar Mill photographed by the late Eric Angus about the period 1966-68. This engine should have been Avonside Avonside 1721/1915, but down the years it have lost its true identity: from the Sandstone webpage:

"This is one of the few locomotives in the Sandstone collection with an uncertain identity. A number of rail historians believe it to be Avonside number 2035 of 1929. We know that during the 1960s the locomotive was modified with Walschaerts valve gear which entailed frame modifications and alterations to its tanks. It is probable that during this rebuild its identification marks disappeared." 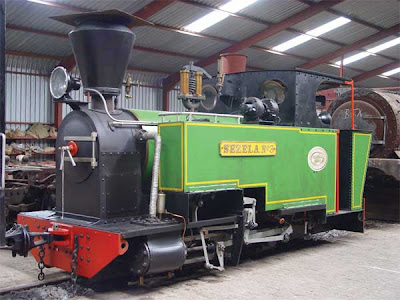 "Sezela No 3" after restoration at Sandstone - photo: Hannes Paling.

More recent photos of "Sezela No 3" by Hannes Paling can be seen here on flickr.

"The locomotive was purchased by the well known rail engineering company, Dunns of Witbank and plinthed outside their offices. Just before Dunns went into liquidation, it was purchased by Pretoria enthusiast, Charles Viljoen, who began to restore it. Sandstone subsequently purchased the loco. Initial work was done at Hoekfontein but the final restoration was completed by Steven’s Mechanical in Howick. The boiler was retubed in Pretoria and Keith Stevens reassembled the locomotive, having to remake many parts along the way. It is painted in Natal Green with yellow lining and is in working order at Hoekfontein." 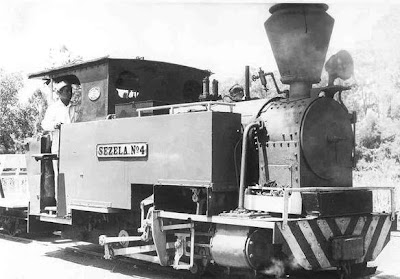 Sezela No 4 photographed by the late Eric Angus about the period 1966-68.


Sezela No. 4 was built by Avonside Locomotive Company in Bristol in 1915, Works Number 1738. It is an 0-4-0 Side Tank locomotive. It was originally supplied to Sezela Sugar Estates, Illovo, Natal, South Africa.

One of six similar locomotives, Sezela worked in South Africa until 1971. Then it was brought to England by Pleasure Rail and kept at the Knebworth house and Wintergreen Railway. Most of its sister locomotives have also been brought back to the UK.

Sezela was restored at Knebworth, appearing in steam at a Leighton Buzzard Railway Gala in the mid 1980s where it distinguished itself by getting stuck on Vandyke Road Crossing!

Circa 1990, Sezela was sold to the Bygone Heritage Village museum, Great Yarmouth. Unfortunately the purchaser had not checked its width - it proved too wide to fit through their platform. Although it was in steam, it was confined to the loco shed.

Sezela was purchased by a WHR member in 1993, although it was not finally delivered to Porthmadog until September 1994. It arrived with a valid boiler certificate. Being a relatively small engine, it should be economical to use, whilst being able to cope with present traffic on the railway. For a while, it was provisionally named 'Ivor', not least because of its similarity to 'Ivor the Engine' popular in children's fiction. However, the engine never actually ran carrying that name.

In December '95, work started on rebuilding this locomotive. This proved to be a more extensive task than had been anticipated. By May '97, it was once again in steam. However, it has since left the WH Railway. [Preceeding information sourced here on Welsh Highland Heritage webpage.] 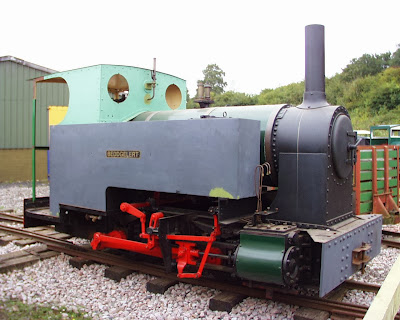 Her driving wheel diameter is 24", the tank capacity is approximately 200 gallons, and boiler pressure 150 psi. She weighs 9.5 tons. 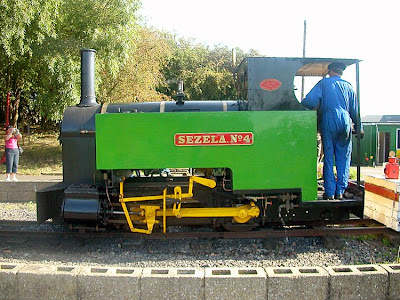 Sezela No. 4 is seen at Leighton Buzzard on 10 September 2006. Photo: Peter Townsend

The locomotive was built with Stephenson's link motion, but was converted to Walschaerts valve gear in the early 1960's. 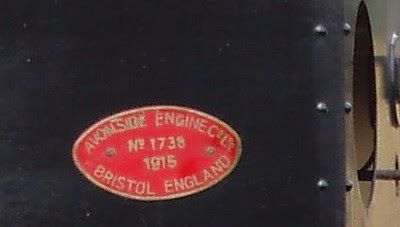 The builder's plate on Sezela No. 4. 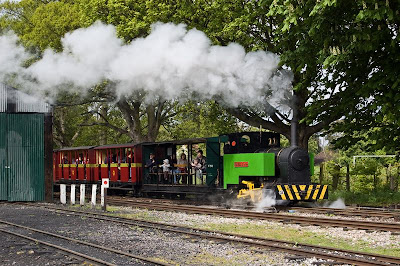 'SEZELA No.4' heads away on the Leighton Buzzard Railway from Page's Park with the 11-30 to Stonehenge. Photo: Paul Gildersleve - 3 May 2010.

Click here to see many more photos of Sezela No 4.

6 Pages with photos and general information about the last days of the cane railways in Natal is given under the heading "The Sugar Tramways" in the 1979 book "THE GREAT STEAM TREK" authored by C.P. Lewis and J.J Jorgensen and published by C. Struik Publishers, Cape Town.
Posted by Piet Conradie (for e-mail addr: see profile plse) at 9:56 AM